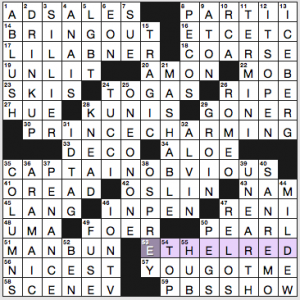 I did things with 34 different crosswords for work today, so I’m pretty tired of crosswords at the moment. This may be an oddly structured post.

I like ETHELRED because I worked with a guy named Ethelbert and these Old English names rock. The parenthetical “(ooh, that hurts!)” in the clue is just weird, though.

33a. [Style influenced by Cubism], Art DECO. Did not know this, makes sense, am glad to have learned it. Other trivia I liked: 35d. [38 things in the Lincoln Memorial], COLUMNS.

Do not like: Two things ending with Roman numerals, PART II and SCENE V. Crosswordese OREAD. Kind of contrived PBS SHOW (you gonna have NBC SHOW, AMC SHOW, USA SHOW, and all the rest? I don’t think so). ABLUSH. IN PEN. Guido RENI crossing SAN REMO.

Quasi-mini-theme: 30a. [He might say “A day without you is like a day without sunshine”], PRINCE CHARMING. I’m sorry, which PRINCE CHARMING is this? Is it the dude from Cinderella? Because the clue better be a movie quote, then. 35a. [He might say “A day without sunshine is like, you know, night”], CAPTAIN OBVIOUS. Deb Amlen mentioned that this quip should be attributed to Steve Martin rather than the nonexistent/metaphorical CAPTAIN OBVIOUS. Puzzle would work much better without these two otherwise-good entries being clued in forced tandem.

I do not at all like the LGBT clue, 5d. [Prideful grp.?]. The question mark doesn’t get around the fact that prideful is a bad thing to be, not the equivalent of proud. Don’t be cutesy by insulting my friends. 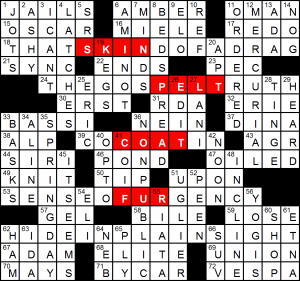 On Friday, we usually see a theme with a code of some sort that is needed to be cracked before the theme answers make sense. Before that happens, the theme answers are a major impediment to solving. Not today, which is more like a typical midweek theme. Straight-up answers, tied together by a final punchline. HIDEINPLAINSIGHT is a great finale, working on two levels – synonyms for hide are hiding: SKIN, PELT, COAT, FUR.

Despite the easier theme, I found this puzzle more difficult than most Friday LA Times puzzles. I took about 30% longer than today’s NY Times! I can’t put my finger on it, but I struggled to find traction anywhere. There weren’t a lot of gimmes, and the ones that were there, I moved around. There were a few unknowns for me, but they were widely spaced – appliace brand MIELE; DINA Meyer; LANI Guinier (theorist?); the long answer SPRINGDAY, though that area was the only part of the puzzle where I didn’t struggle!

This entry was posted in Daily Puzzles and tagged Bruce Haight, Jeffrey Wechsler. Bookmark the permalink.