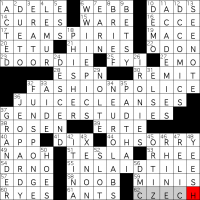 hello, fiend readers! joon here filling in for amy, who’s road-tripping this weekend. i was very pleased to see the constructors of today’s puzzle—they had a themed puzzle published in the NYT a few months ago, and most recently i saw the class live in action at the stamford marriott during the ACPT. i wonder if they were constructing this very grid?

it’s a lively one, too, built on three 13s running across the center in a stair-step pattern: FASHION POLICE, JUICE CLEANSES, and GENDER STUDIES are all super-fresh, contemporary phrases, so it’s a great building block for a grid. two of the long answers intersecting it were WWII EPICS and NEURO LABS, both of which are teetering on the edge of roll-your-ownism, but they’re both at least specific and evocative.

let’s run through some other noteworthy clues and answers:

all in all, on the easier side for a saturday, but lots of fresh, fun stuff, and very little in the way of demerits. i enjoyed solving it quite a lot! 4.5 stars.

The theme is…well, you already figured it out. 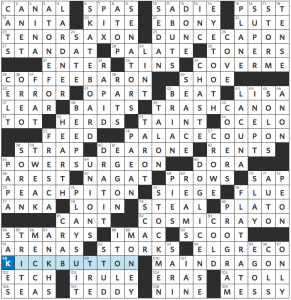 Not groundbreaking to be sure, but solid enough fare. What I gather from the message we received last week from the WSJ crew is that if we’re seeing puzzles by editor Mike Shenk, that means they are low on acceptable submissions for that day of the week. This translates to an opportunity for constructors to get their work noticed.

Highlights in the fill: SKATEBOARD, EYETOOTH, author Ring LARDNER, DOG LICENSE (with the clever clue [Lab requirement]), SENATORS, “COVER ME,” EL GRECO, and FLAT RATE. I’m not sure about PLAYSUIT; it appears to be a thing, but that’s not a phrase I’ve ever heard used.

I didn’t know LACUNA as the answer to [Unfilled space] nor PAEAN as the answer to [Song of praise] (I wanted PSALM at first). The former crosses [3M sponge brand] OCELO and the latter crosses obscure [1976 George Harrison song] DEAR ONE, so those might have caused some trouble. STOCKMEN [Cattle farmers] is another new one to me. I can’t imagine that this is in widespread use.

And that’s about all I’ve got. The theme works fine and it’s got some humor.  I’ll put this around 3.5 stars. 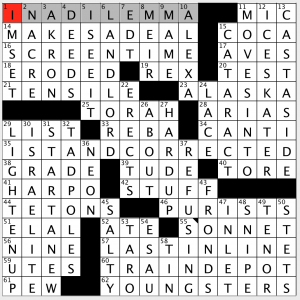 Today’s Saturday LAT challenge has only 66 entries, and although it took me a little longer than it normally does, this has virtually nothing objectionable in the grid. Yes, a few clues are tricky, and I can also wimp out a bit and say that I haven’t felt the greatest this week, and thus my brain wasn’t working properly! (Some may say my brain has NEVER worked properly!) I found this a fun solve, and I still am not that familiar with Craig Stowe, but he can construct as many as he wants! 4.5 stars today.

It should be a great weekend! Everyony 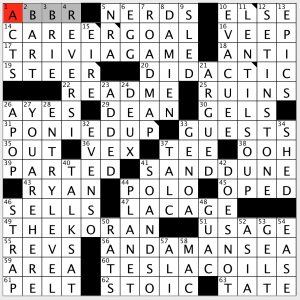 Ah, somewhat of a respite today with a puzzle by “Anna” (Stan). As usual, I would portray this one as easier than some other stumpers, and that is a good thing! I had some quiet time to solve this one, and yes, I had a few errors in there, this wasn’t too bad. The upper sections gave me fits, but overall this one was fairly straightforward, and I learned a fact or two! 4.3 stars today.