All the theme clues are identified by asterisks: 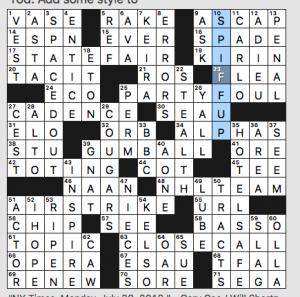 What ties these all together? 63a [Narrow escape … or what the end of the answer to each starred clue is?] tells us it’s a CLOSE CALL. OUT, FAIR, FOUL, BALL, STRIKE, and SAFE are all CALLs on the baseball field. This is a nice, solid Monday theme. The density of theme material leaves us with some fill that is blah at best(ROS, OLLA, C’EST as a FITB, and good old ASTA). On balance, though, a good puzzle.

What I didn’t know before I did this puzzle: that the name ESAU is mentioned more than 70 times in the book of Genesis.

Welcome! Have a seat in the chair. ::puts apron around you:: Ok, what are you thinking? Bangs? Fade? A new color? Let’s go visit our Monday LAT constructor in the 60a to find out more: 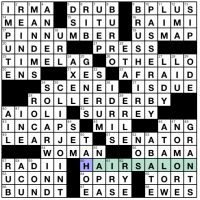 17a: PIN NUMBER [ATM user’s code] – I got rightfully roasted for using this in a recent puzzle because the N in PIN stands for number.
38a: ROLLER DERBY [Contact sport on skates] – Let’s talk about how badass roller derby-ists are!
9d: BRUSH FIRE [Forest threat] – Too many of those happening these days. Scary!
35d: CLIP JOINT [Business known for overcharging, in slang] – I’d never heard this term before. It seems to primarily apply to strip clubs, night clubs, and bars.
60a: HAIR SALON [Permanent place … and where to find the starts of the answers to starred clues]

Many thoughts! So, the “things found in a hair salon” theme was decent and all the items were clued differently to their salon use, so that’s a plus for me. But, with respect to the revealer, perms are hardly a thing anymore and calling one a “permanent” seems even less current. That didn’t do much but try to make the revealer clue a bit winkier, so it’s not my favorite. Finally, the theme entries should be the only longest entries in the grid, but we have SOLAR WIND and PASSERS BY next to themers and of equal length.

The grid was fine, but there certainly was some tough stuff in here for a Monday: IRMA RAIMI SURREY IMPUTE ANNEE DSM ROCA and ERLE! 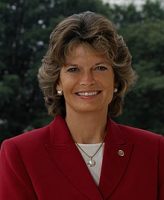 #includemorewomen: Which women do we have represented in the grid this week? We have IRMA la Douce, UMA Thurman, LADY Godiva, Lucy LIU, and heroINE.

But, the fantastic femme double feature of this grid is [Elizabeth Warren or Lisa Murkowski, e.g.] for SENATOR and WOMAN. Both descriptors are important! Did you know that there are currently only 23 self-identified women serving in the U.S. Senate (an all time high!), even though just under 51% of the U.S. population is female (at least based on sex assigned at birth)? That doesn’t feel like equal representation to me. Folks arguing that people of color shouldn’t be “over-represented” in positions of power or leadership in our country often have no problem with men making up the vast majority of, well, any of those positions … even though they aren’t the majority of our population. It’s almost like there’s a system in place to propagate the success and power of men at the expense of women! Hmm…. (And don’t @ me or comment below with misogynistic nonsense. We aren’t here for it.) Thank you, Senators Warren and Murkowski, for your service to our country!

The theme eluded me until I neared the end and filled in the revealer, MIDDLE SEAT at 58a (clued as [Air traveler’s dread, and what each starred answer has]). 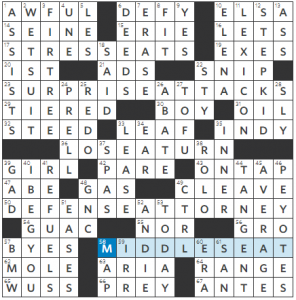 A nice example of the hidden word type of theme. The purist might argue that SEAT is not exactly in the middle of each entry, but that’s not exactly possible with grid-spanners 15 letters long and a 4-letter long keyword.

I for one hate the MIDDLE SEAT, but what else can you do but tolerate it? My preference is the window seat so I at least have the possibility of using the wall as a headrest. But I may be in the minority. I think more people prefer the freedom of movement associated with the aisle seat. What say you?

Really nice stacks of 7s in the corners: WET SUIT, FIR TREE, LEXICON, STEPKID, “I BEG YOU,” TANGENT, AVERAGE, and PEYOTES (though it’s sadly pluralized). In fact, everything just seemed to be smooth as butter. There’s IST and the UNE / LES combo in the NW, but I think that’s as bad as it gets.

A very clean and flowing Monday grid to start your week. 3.8 stars from me. 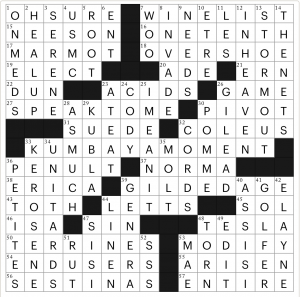 It’s Elizabeth Gorski’s turn in the New Yorker rotation, and today’s entry was a smooth solve along with my coffee this morning.  A few nice crunchy moments that made me think, a few pieces of fill that were just okay, and a lot to like in between.

Tom Cochrane’s “Life IS A Highway”, best known as the end credits song from “Rocket Dog”. Houston, we have a dog!

A solid start to my day, even if this wasn’t my favorite New Yorker puzzle that’s run lately.

Boswords was yesterday, and I got to hang out with BEQ and the rest of the team. The tournament’s theme was “Saturday Night Live” (on Sunday afternoon), and Brendan’s band, the Boston Typewriter Orchestra, was our musical guest. They have a new album out — on cassette, of course — listen to a sample and order it here. 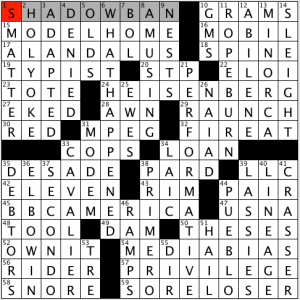