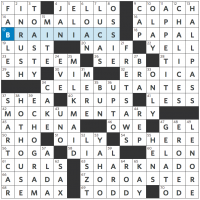 Okay, BRAINIACS, what do we have here? We’re looking for “someone who might do some splicing.” It’s not immediately clear which entries are meant to be the themers, since there are stacked nines in the NW and SE, plus a couple of twelves in the middle. Those twelves are portmanteau words, so we can be fairly confident that the other themers we’re looking for are also.

On the metasolving principle of “make a list and see if something emerges,” I made a list of the expanded entries, thinking that the splicing of the two words might be significant, given that the title draws our attention to what has been “spliced out”: 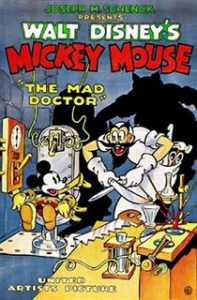 rom the last two, seems like we might be looking for a DOC + TOR. A MANDE DOCTOR? Is that a thing? a MANRITYDE DOCTOR? Something’s not right, if the first two follow the same mechanism as the second two. Is it it just the sound we’re eliding in the portmanteau? A MAD DOCTOR is a thing (maybe not as much of a thing as a MAD SCIENTIST), so what how could we get that out of the set? We could splice together MAD from BRAIN + MANIACS and CELEB + DEBUTANTES — if we’re only eliding the sound, and not the specific letters. I ended up submitting MAD DOCTOR, because that seems like the only plausible solution suggested by the mechanism, but I’m not 100% satisfied. Your thoughts?