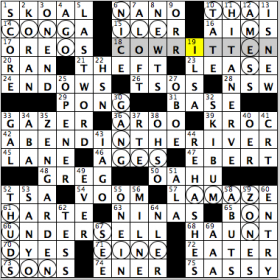 There’s no slowing down here as it pertains to solving fun puzzles, and today’s edition takes us on a few trips on bodies of water: Each set of circled letters all form “L” shapes and the letters inside of them, when combined, create names of actual geographical rivers. We confirm what’s going on with those circles with the reveal of  A BEND IN THE RIVER, which bisects the grid going across (42A: [Novel by V.S. Naipaul that inspired this puzzle’s theme)]).

Placing in SKOAL to start my solving was not hard, but what I ended up thinking about afterward, in relation to the entry, had me in knots somewhat at that moment (1A: [Scandinavian cheers]). So this word, with this spelling, is used as a greeting, though “skoll” (or “skol”), according to Viking legend, was the chant that Vikings would say to their partners in battle as they hoped to defeat their opponents in battle and, after victory, drink merrily from the skulls of the vanquished (dead) opponents. No matter how many times its used as a friendly greeting, you won’t catch me saying that since I’ll be battling my mind to not develop images of beheadings by battle axes and drinking grog from skulls. Lovely!!

Though I had never heard of the book in question in the reveal, the first two rivers that appeared when solving (Congo, Ganges) was a dead giveaway as to what was happening, and I just ended up taking a guess at the book’s title. (Thank goodness that guess was correct and did not hold me up for any amount of time when solving.) The paralleling entries of ZEN GARDEN (35D: [Calming outdoor locale where one may meditate]) and HIT A NERVE was pretty appealing to the eye…and definitely did not hit a nerve (11D: [Touched on something sensitive, so to speak]). What probably did hit a nerve is the much-talked about crosswordese entry of NLER, with the clue referring to two National League teams (Major League Baseball), the Pittsburgh Pirates and San Diego Padres (64D: [Pirate or Padre, for short]). So how can we take something that might be a spot of bother for crossword solvers and turn it into something educational and, hopefully, enlightening? Here’s how…

“Sports will make you smarter” moment of the day: KROC (39A: [Fast food mogul Ray ____]) – Did you that the main reason the San Diego Padres still reside in Southern California to this day is because of the late McDonald’s magnate? Four years after the Padres became the latest expansion team in Major League Baseball in 1969, their original owner found himself strapped for cash and, during that 1973 season, it was widely speculated that the team would relocate to Washington D.C. at the end of the year. In stepped Kroc, who heard about the team’s financial struggles (while on his yacht in Florida) and bought the team for $12 million in January 1974. Kroc owned the team from that point until his passing in January of 1984. In that subsequent 1984 season, the Padres ended up winning their first-ever National League pennant and made their maiden appearance in the World Series, and the team wore a patch on their jerseys with the initials “RAK” in Kroc’s honor all season long.

Bonus “haha” moment: If you do need a laugh, here’s something to chew on that’s related to the above entry. After Kroc initially told his wife, Joan, that he wanted to buy the San Diego Padres, she reportedly responded to Ray by saying, “Why would you want to buy a monastery?”

Thank you so very much for your time today, and I hope you all have a wonderful rest of your Tuesday. And as always, keep solving!! Oh, and SKOAL!!! 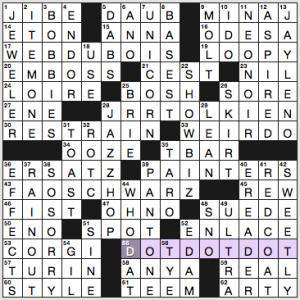 The theme is famous people whose names are three initials plus a surname, and the revealer relates to the periods that follow those initials. 55a. [Indication of more to come … or what 17-, 28- and 43-Across all contain] clues DOT DOT DOT, and the other themers are:

There are a few issues with the fill. Not the first time we’ve seen ITEM ONE in a puzzle in recent weeks, is it? And ODESA and ENO and ANYA are awfully hard for a Tuesday. Overall, decent puzzle. 3.7 stars from me. 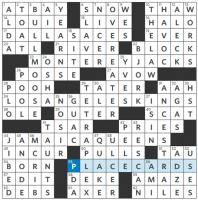 Have you ever played Ticket to Ride? Today, Ross Trudeau gives us the crossword version of that game, as he deals us in for a trip across the country:

17a: DALLAS ACES [World’s first professional bridge team] – This is probably the weakest / less familiar theme entry for me. Also, how do you only have one competitive team, unless you’re playing against yourselves?
23a: MONTEREY JACKS [Semihard cheeses] I’ve never heard this pluralized, but it fits the clue phrasing.
34a: LOS ANGELES KINGS [2014 Stanley Cup champions] – Go local sports team!
44a: JAMAICA QUEENS [Location of JFK airport]
55a: PLACE CARDS [Wedding table indicators, or a hint to 17-, 23-, 34- and 44-Across]

There is so much I like about this theme and Trudeau’s execution of it:

My only small quibble with the fill is that I almost Naticked at PDA / DEKE. I couldn’t understand the too-cute clue for PDA (making out on the bus?) and don’t know hockey well enough to have ever heard of DEKE. Otherwise, the grid is pretty clean, which is extra impressive considering that it’s allllmost a pangram! The grid contains every letter but F, which must have driven the constructor crazy.

#includemorewomen: There sadly aren’t too many women represented in this puzzle, which is the only other ding I’d have against it. We have old-timey DEBS and more modern BJORK. Björk is an Icelandic singer, songwriter, and fashion icon who has been mainstay throughout most of her lifetime. One amazing story from her Wikipedia page involves how big she was early on in her life thanks, in part, to how small her country is: “After a school recital in which Björk sang Tina Charles’ 1976 hit “I Love to Love”, her teachers sent a recording of her singing the song to the RÚV radio station – then, Iceland’s only radio station. The recording was nationally broadcast and, after hearing it, a representative of the Fálkinn record label offered Björk a recording contract. Her self-titled début, Björk, was recorded and released in Iceland in December 1977 when she was 11 years old.” Wow!

PS: Is the WSJ telling me something? Between yesterday’s themer STRESS EATS and today’s inclusion of OVEREATER, I think the universe is telling me to put down these cookies. :D 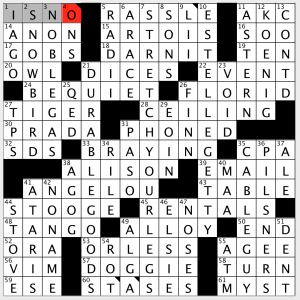 I wasn’t sure what the theme was here for a minute, but then 7D explains what is going on. With the design of the grid, I found that I solved heading down, and I didn’t necessarily get to the 7D clue until maybe just past halfway through the grid, so even though it is smack in the middle, it still made for a nice “a-ha!” moment. Which is always good. Maybe I shouldn’t solve so fast! The themers:

Hopefully it is clear that there are LEGs hidden in those four theme answers, and they are “stretching” downwards. 74 words in this one, with lots of typical Matt fill. Yes, there are a couple of obscure refs in this one, which of course I will try to highlight. 4.2 stars this week.

That’s it for this week’s Jonesin’! 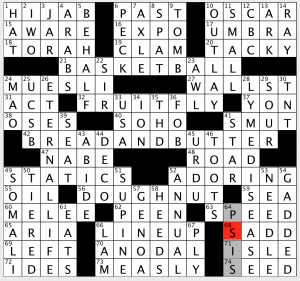 We have a 16×15 grid this week, as well as left to right symmetry, which I would surmise does not appear as often in a Monday or Tuesday easier puzzle. Fun times! And a cute theme to boot, with the revealer in the middle.

What’s YOUR “bread and butter?” I am hoping at some point it will be retirement income! 15 years at most to go, 13 at least. Not long! I thought this was pretty clever, finding four phrases that worked well with this theme idea. As an example, you can have a bread basket and there are Butterball turkeys! Then you have breadfruit (it’s a tree), butterfly, bread dough, butternut, bread line (which we may see soon in this country!) and butter up. Well done. 4.3 stars for this variant grid.