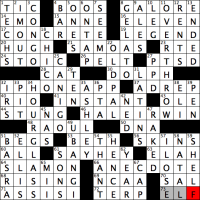 hello and welcome to episode #530 of matt gaffney’s weekly crossword contest, “Did You Hear How It Started?”. for this week 4 puzzle, matt challenges us to find the three-letter entry in the grid that could be an eighth theme entry.. okay. what are the first seven theme answers?

i spent a good bit of the weekend working on this, some of it in collaboration with andy, and we have gotten it at the eleventh hour, which is to say at 11 am eastern, which is to say the 96th hour. (very nearly the 97th, considering the email arrived slightly earlier than usual on friday.) i won’t go over all of our dead ends, but here are some things we noted:

there are a very large number of first names in the grid, which is sort of tied into “start”, but i think we’d want there to be 7 or 8 rather than 10 or 12 or however many there actually are.

at times i toyed with the idea that perhaps each *ed answer was related somehow to a non-*ed answer, so that perhaps the grid had 14 (or 16) theme answers instead of 8. i was nudged this way partly by noticing the word count of 80 is pretty high, but the fill is rather clean and for the most part, the clues do not appear to be strikingly forced in any way. i will admit that the clues for {30-___ (tennis score)} ALL and {Give a casual greeting} SAY HEY stuck out—the first because it also suggests LOVE (or 15 or 40) and the second because it’s very surprising to see this phrase without any mention or even implication of willie mays.

at one point i asked andy, looking at the various parts of the grid, which areas look like they are not how you’d fill it if the only theme answers were the seven *ed entries. he replied, and i quite agree, that everything looks fine except for the lower right, where I LOSE and NATAL and ELAH all seemed suboptimal if the only constraint was ANECDOTE. this strongly suggested sending in either SAL or ELF as a hail mary even if we never got unstuck on the meta, which looked for most of the weekend like a very live possibility. that felt like considerably better odds than guessing one of the 22 three-letter entries at random.

in fact, i’m only realizing this just now, but i wonder if matt artificially inflated the word count in the grid to make the odds longer on randomly guessing one of (say) a dozen three-letter answers. that would be pretty sneaky, but he’s been known to be sneaky on these week 4s.

looking over the three-letter answers, there are a few borderline cases, but the clearly intended answer is {North Pole resident, it’s said} ELF, because elves are short and it starts with a short E. as an extra nudge, the clue points you towards the kind of elf who works with santa, rather than, say, an elf from tolkien who might not be short at all. similarly, the clue for 67d {Part of a baseball uniform} CAP clearly refers to a soft cap, even though hard caps exist (e.g. the cap on a gas tank).

this is a super meta, and i wish i’d had the aha moment—andy was the one who had the epiphany while we were solving together. it’s a very hard one, even though there’s no treasure hunt aspect to it: everything you need to understand the meta is right there in the *ed answers. even the clues aren’t part of the theme. it’s just a subtle connection between the semantic and the phonetic. beautiful stuff.

i cannot see any possible reason to give this puzzle fewer than 5 stars. bravo!