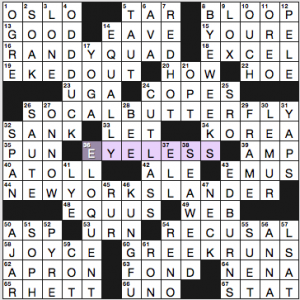 I like the theme but not the revealer, EYELESS, 36a. [Unable to see … or, when taken as a homophone, what today’s puzzle answers and clues all are]. EYELESS is such a weird word. The four long themers are cockeyed phrases that have had an “I” omitted:

And the entire grid has no I’s and the same goes for the clues, which is the stunty sort of thing I don’t tend to enjoy. The fill is mostly okay, with KUNG FU, ODD DUCK, ELOQUENT, and BYE WEEKS livening things up. But ON NOW and UGA are ick. And while everyone uses the singular EAVE, it’s kind of bogus.

Seems like I almost always like a DAB puzzle. This one’s no exception. At first this may seem like just an add-a-letter theme, but it’s a little tighter than that. He adds an M to certain words to turn them into animals. I initially thought the M would always fall at the beginning of the word (as in the first two theme entries and in the perfectly-apt title “Manimals”), but that probably would have been impossible. 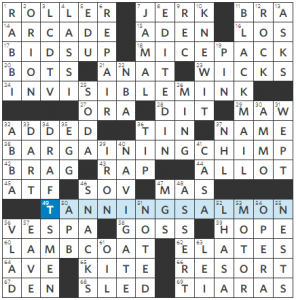 The only thing I could maybe ding the theme on is having the first two with the M at the beginning. That led to a little confusion on my part. Maybe switch the first and last one or the 2nd and 4th ones. But otherwise, cute, clean, and fun.

Fill-wise, BLACKMAIL is fun, especially with its deceptive clue [Lean on, in a way]. If you’re like me, you thought it meant a synonym for “rely on.” NAVIGATE is pretty good, but EDITED IN and DRAFTSMEN serve in a more utilitarian role.

New to me is LASSI (symmetrical partner of LHASA in the grid) clued as [Yogurt drink]. Per Wikipedia, “Lassi is a blend of yogurt, water, spices and sometimes fruit. Traditional lassi (a.k.a., “salted lassi”, or simply “lassi”) is a savoury drink, sometimes flavoured with ground and roasted cumin. Sweet lassi, however, contains sugar or fruits, instead of spices. Salted mint lassi is highly favoured in Bangladesh.” Certainly sounds like it’s worth a try!

There’s definitely some crosswordese here (ADEN, ANAT, ORA, DIT,  MGS, LCDTV) but none of it seemed to get in the way.

My overall impression during the solve was that the clues felt fresh and interesting. In addition to the theme clues, here are some others I NOTED:

And that about wraps it up. I give it an even 4 stars.

I seem to recall that there was a show called Manimal sometime in the past. Ah, yup it was in the 80s. It was on NBC and lasted from September 1983 all the way until December 1983. The premise was that this young, wealthy, handsome doctor had the ability to shapeshift into any animal and would use this ability to help police solve crimes. Funniest Wikipedia note: “Another aspect of the transformations that added to the show’s camp factor involved Dr. Chase’s clothing during a transformation: He was depicted generally wearing a three-piece suit and tie, and the viewer would see it rip off him as he shape-shifted into an animal, though once the transformation was complete there would be no sign of his discarded clothing. A bit later, he would transform back into human form with all of his clothing perfectly restored upon his person, even if he was unconscious.” Enjoy this panther transformation, though the other animals’ reactions are what do it for me. I can’t imagine why they canceled it! 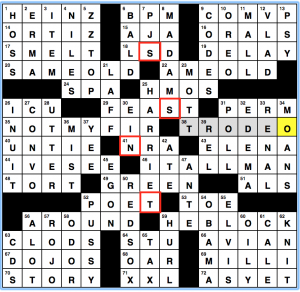 This week’s AVCX is from Editor Ben Tausig.  It’s a fun one and was a nice breeze solve for me.  I’d say the difficulty rating provided of 3/5 is spot on.

Let’s take a look at what’s going on.  The title here helped me parse what was going on, as those things often do:

The clues are doing a lot of the lifting here (and I loved all of the grizzled comments re: constructing seeded throughout), but the “Gone Over” part of the title is what’s the point here – each “nothing new” clue goes over up into one square of the row above it before completing.  I’ve highlighted those in red in the screenshot – SAME OLD SAME OLD, NOT MY FIRST RODEO, I’VE SEEN IT ALL MAN, and AROUND THE BLOCK.

LSD, the music project from Labrinth, Sia, and Diplo. 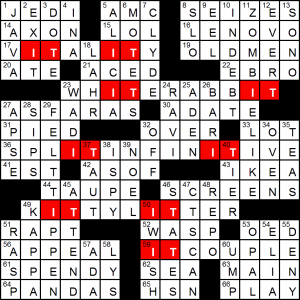 I have mixed feelings about this theme and its execution. ITCOUPLE is a lively revealer, and the concept is sound – two IT’s in the four theme answers. Of course IT is a fairly common bigram, so that mutes things a tad. I also wish VITALITY was replaced with a fourth two part entry. Such a short entry doesn’t have too many options though: a search query turned up RITZBITS, which isn’t too great either.

The other four fifths of the theme answers were fun. Two animal-related entries in KITTYLITTER and WHITERABBIT; and especially the grid-spanning SPLITINFINITIVE, even though the actual concept that this is somehow incorrect is absurdist Latinate nonsense.

The grid is quite crowded themewise, so containment rather than flashiness rules outside the theme. Mostly, things are under control though. I’m not sure who says SPENDY, but it isn’t me. Dictionaries tag it as “US informal”. The NY Times Spelling Bee doesn’t seem to like [Desert riverbed], WADI but I’m not sure what’s up with that.

Confession. I love Songs in A Minor so much more than anything else ALICIA [Keys of music] did after that… I feel like I shouldn’t.