The Fireball puzzle is on summer vacation.

AT THE DROP OF A HAT is our revealer (60a, [With the slightest provocation, and how four answers in this puzzle make sense]). Those four answers feature the trigram HAT which is still present in the grid, it’s just dropped down into a crossing entry. 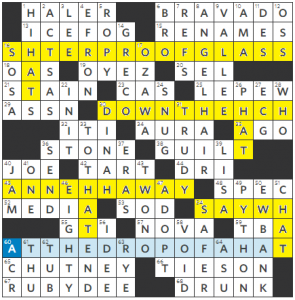 The theme concept is great, but I was confused before I got to the revealer since it seemed like the phrases were just missing ATs. Since the title is “No Hesitation” this made me wonder how AT is representative of a hesitation. With that title I would have thought UMs, UHs, or ERs, were dropped. But once I got to the revealer it all made sense and I’m good with the theme.

I may like the theme concept, but I’m sad to say the execution didn’t live up to it (for me, anyway). There’s so much crosswordese in here that it really made its presence felt and took away from the fun.

I know that themes like this (with entries in both directions) cause a lot of constraints on the grid. But even with all the extra blocks (aka “cheater squares”) in the NW/SE corners and on the right/left edges, there’s still a lot of mucky stuff: starting off with roll-your-own HALER and moving on to OAS, OYEZ, SEL, CAS, ITI, DRI, GTI, OSS, IN IT, ECG, IDEE, ACR, and (ugh) TWO NO [Bridge bid, casually].

I’m not sure what the connection between bridge and crosswords is, but I’ve decided I’m in the anti-bridge camp. Just when I got used to seeing ONE NO, now here comes TWO NO. Bridge is now officially one of my pet peeves. I hereby vow never to play a game of bridge even if my life depended on it — even if I became a suave Bond-like superspy and was required to play a game of bridge in order to defeat the supervillain and stop his doomsday device (well, maybe in that case I’d make an exception; but I doubt I’d win anyway).

Sorry about that. I’m sure bridge is a perfectly fine game, played by perfectly nice people, but I don’t know anything about it (apart from ONE NO and now TWO NO) and I think I’m content to keep it that way. I’m sure this answer was fine for plenty of solvers. 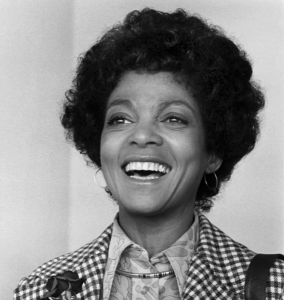 Moving on. There is some nice fill here, especially ANGEL HAIR, grid counterpart to TO THAT END. I also like BRAVADO, PYTHON , RUBY DEE, and CHUTNEY. I’m keen on a spicy/sweet mango CHUTNEY to go with papadums.

But with all the abbreviations, etc. in the fill, cluing felt similarly stilted. A few of them got me wondering:

All in all, a good theme, but too much other stuff got in the way. Three stars from me.

Well, this was fun! If you had trouble making heads or tails of this one, perhaps you weren’t alone. 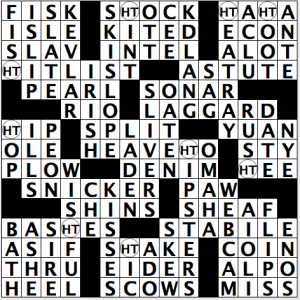 The circled squares in the grid work with either H or T (heads or tails).

10a. [Interjection heard when breaking up] HAHA (as in breaking up laughing) or TATA (as in breaking up a relationship… and I find the idea of using “Tata!” as a break-up line somewhat wonderful) with 10d. [Carrier of something that might burn] HEAT RAY or TEA TRAY and 12d. [It’s a blast] HOOT or TOOT.

20a. [Many people may be eliminated by one] HIT LIST or TIT LIST?? Oh. TITLIST (as in a sports champ, I think) with 1d. [Something at the end of the hook?] FISH or FIST. Great clue for that part.

31a. [With 31-Down, breaking records, maybe] TIP / TOP or HIP / HOP. I’m not sure I completely understand how HIP HOP works with the clue.

39a. [Cry aboard a frigate] HEAVE HO or HEAVE TO with 40d. [Ones in the know] HIPSTERS or TIPSTERS.

56a. [Wallops] BASHES or BASTES with 44d. [Yearning] WISTFUL or WISHFUL.

62a. [An investor might want to get a fair one] SHAKE or STAKE with 63d. [Evidence of a little spasm] HIC or TIC.

This is not to discredit Vongsathorn’s fine work, but I distinctly remember solving a puzzle with this very same theme… It was on April Fool’s Day some years ago and I was sitting in a parking lot of a school before going in to play piano for their musical. The only reason I bring that up is that the theme was so memorable and clever that I specifically remember where I was while solving (I’ve forgotten the title of the play I was accompanying). 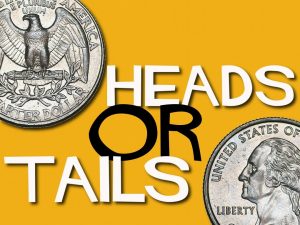 is having that same experience with this puzzle, and I hope Xan doesn’t catch flack for his version.

[Update: Xan’s comments on his own puzzle acknowledge this- it’s an interesting read]

At first, I just thought the circled letters were all T’s, and was caught off-guard that it was a Thursday theme, but the AHA came with the revealer at 65a. [With 55-Down, actions that can be performed nine times in this puzzle without affecting any of the clues] COIN / FLIPS, and it was fun to go back through answers I’d already entered and see how they worked with the clues.

Naturally, some of the entries and/or clues felt a little forced when the letters were swapped: HIT LIST (great)-  TITLIST (say wha?). TIP TOP (I get it…)- HIP HOP (if you say so…). HEAVE HO (that works!) and HEAVE TO (wait… that’s a phrase?), but that’s the nature of Schrödinger puzzles.

There’s a heck of a lot of theme here, and it’s handled well.

5d. [Place for a mogul] SKI SLOPE. Moguls scare me when I ski. I avoid at all costs.

4 stars from me! I’m still having a tough time looking at TITLIST in the grid. 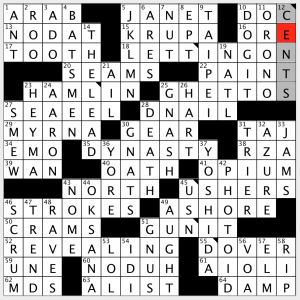 Happy Thursday, everyone – we’ve almost made it to the weekend.  Today’s BEQ puzzle after last week’s flashback to his 2017 Boswords entry is a new one with the title “Tipping One’s Hand”. This one took me a minute to fully “get”:

Well, that’s not much to go on.  It’s all about looking at some of the other connected clues in the grid:

The expression is TOOTH AND NAIL, and if you follow the H from TOOTH in a diagonal down to DNAIL, you find the H-A-N-D tipped to make the full phrase.  The same H-A-N-D tipping works for 35A‘s HAN DYNASTY (“With 23A, Historical period when negative numbers and paper were invented) and 43A/55A‘s NORTH ANDOVER (“Massachusetts town where Anne Bradstreet died”)

I’m leaving it there since this week took more explanation than usual and the rest of the fill is pretty straightforward (though I’ve got my stink eye on you, JLKMN, “I/O connection?” or not). 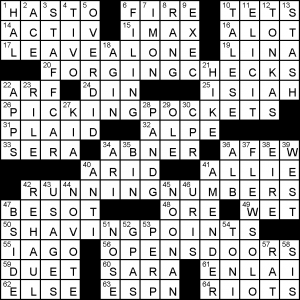 It’s a theme that reminds me of an old Reader’s Digest “Towards More Picturesque Speech” set. That is not to say it wasn’t an entertaining quartet. Basically, four crimes are considered hyperliterally, and paired with professions whose practitioners are considered likely to commit said crimes. So a blacksmith is FORGINGCHECKS, a miner is PICKINGPOCKETS, a marathoner is RUNNINGNUMBERS and a barber is SHAVINGPOINTS.

In contrast to the theme, I found the fill a little bland. It’s partly due to the 13/14/14/13 theme answer lengths, which play havoc with grid design. In any case, even in the medium length answers, there were a lot of entries like AMENDER and PANDG, and not a lot of choice morsels to counterbalance that.