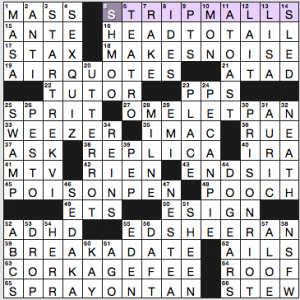 Like STRIP MALLS but not the clue, [Commercial lines?]. It’s not a line! Strip malls are three-dimensional. Like MAKES NOISE, which we did at today’s anti-violence protest march/rally outside Wrigley Field. Love AIR QUOTES. Like WEEZER, didn’t know they were a [Rock band with four(!) self-titled albums]. POISON-PEN, ED SHEERAN, CORKAGE FEE, PECAN PIE also tasty.

Do not at all care for the clue for PRISON RIOT: [Stir crazy?]. That is some serious shit and a playful little clue is inappropriate.

SPRAY-ON TAN is way, way less “in the language” than spray tan.

Cute clue for DOG-EARS: [Turns a corner?]. It had me thinking of other meanings.

Wasn’t sure how current the [Cosmopolitan feature] clue for SEX QUIZ was, so I checked it out. Yep, they still have some sex quizzes. Here’s one (it is NSFW) that purports to tell you whether you’re “kinky AF” or somewhat more conventional. Please do not report back on your findings.

Today’s puzzle is from the Fiend’s own Janie! Welcome back! So nice to see you again, on the other side this time. 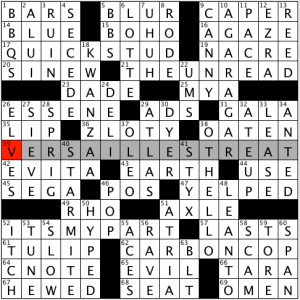 Our title is “Why Not” — and why not indeed? Why not remove the Y from phrases, and see what happens?

A fine example of a letter-deletion theme! My only quibble (and I’ve debated this with CHE editor Brad Wilber) is that one of the entries, IT’S MY PART, contains the deleted letter Y. Otherwise, fun and funny. And — as bumper stickers on Subarus in Vermont remind us — if it’s not fun, why do it? 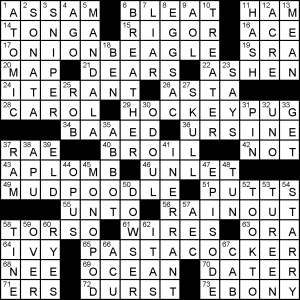 I think, given a lot of life revolves around dogs, that I’m kind of the target audience of this puzzle. On the other hand, this set of dog puns mostly didn’t land well for me, particularly HOCKEYPUG with its change in consonant; and MUDPOODLE, given poodle and puddle are cognates.

Puzzle was in general surprisingly unpolished. There are only four theme entries, and yet we have long answers that are replete with affixes – DOWSER and TREATER being the most egregious. The bottom right and top left are 4×3 squares and yet include SRA, RYES and ERS. Are you telling me there is no reason to not ditch those answers?