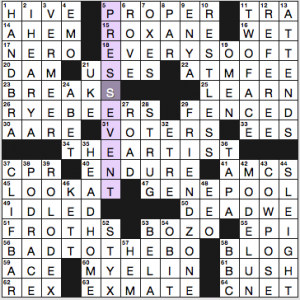 Okay, this puzzle messed. me. up. I’d fill in some answers, and then I’d hit something with a cross-reference in the clue, and change the x-reffed answer to what made sense with that other clue, which means I’d have to delete a crossing I’d already filled in. Well! The gimmick (on a Saturday!!) finally clicked when I had most of 56a. [With 1-Down, literally, downright dastardly] filled in and knew it had to be BAD TO THE BONE but there were only 10 squares. Aha! The “literally” in these x-ref clues modifies that apparent clue number rather than the phrase that follows. “1-Down, literally” is the number/word ONE, going Down in the grid. So BAD TO THE BO turns downward to complete the ONE and give you BAD TO THE BONE.

The other themers are:

I don’t generally like a stealthy theme stuffed into a Saturday puzzle, but a brain-twisting gimmick is always welcome. (YMMV.)

Worst fill: TRA AARE EES AMCS. I’m glad, though, that BELA wasn’t clued via the odious Karolyi—I’m still mad at him for lying about Kerri STRUG‘s vaulting on an injured ankle. He claimed afterwards that he’d told her it was totally her call, when actually we all saw him exhorting her, “You can do it!” so that she did a second vault and injured herself worse.

4.5 stars for the gimmick, but the inclusion of FRIEND ZONE with that clue knocks the puzzle down to 3.9 stars. 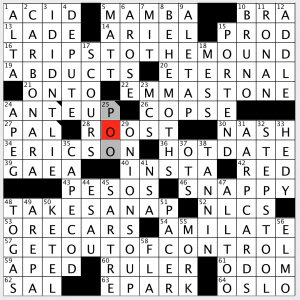 It has been a minute since I have seen a C.C. puzzle! She has cranked out a lot of easier Tuesday puzzles that I have solved, but here we have another one of her themeless productions. We have a fairly wide-open 70-worder this week for the LAT Saturday challenge, and it seemed just a tad tougher than normal. I feel like I keep saying that! I still gotta go buy those noise-cancelling headphones for solving …

Lots of lively stuff in this one, and yes, I did make an error or two. Perhaps I am relaxing a bit since it isn’t ACPT time. I would love to be able to attend some of these other tournaments, but for us folks in the Midwest, it just doesn’t happen. Perhaps when I retire! A solid 4.5 stars from me.

Some notes on the puzzle: 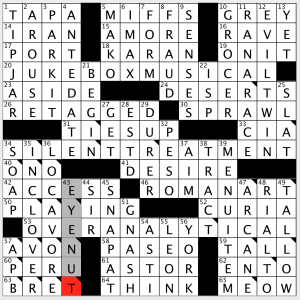 This was one of the hardest Stumpers I have seen in a while. I have also been watching the uber-talented solvers try to solve these Stumpers using only the down clues, and when I saw this puzzle, I was immediately hoping that someone was going to tackle this puzzle this week. It looks like, at the time of this writing, Andy Kravis is going to take the plunge. I almost feel sorry for him! At the same time, I am extremely curious to see how well he does. If you haven’t seen any of these videos, firstly, block out half of a day! Erik Agard solves the 7/21/18 Stumper with downs-only, and the vid is FIVE HOURS. On 7/28/18, Joon Pahk takes a stab. His video is only THREE AND A HALF HOURS, and he doesn’t finish!! I am trying to see if I can get the twitch feed to play on my living room TV while I do something else as Andy is in his agony!

About the puzzle now: as stated, it is a doozy. My timer said 28+ minutes, and it wasn’t on the entire time! If you like the agony that the Stumper provides, this is the week you’re in hog heaven. Matthew Sewell’s Stumpers seem to be getting tougher as he makes more of them. I may have to start watching out for his byline just like I watch out for Longo and Wilber! 4.6 stars for a puzzle I think I will be seeing a lot more of this weekend!

I could go on; there’s a lot of great stuff in here. Again, keep your eyes peeled on crossword Twitter for news of a live downs-only solve. And I think there may be many more coming.

I wasn’t aware of the title’s meaning so I had to look it up. It’s a movement to make preschool education available to all children in the same way Kindergarten is.

That aside, it serves as our hint to the theme. I guess it can be interpreted to mean, “Everything before the K,” which is not a bad basis for a theme. Today we have phrases whose final word normally ends in K, but said K has been removed changing the meanings of the phrases. Clues have been altered wacky-style. 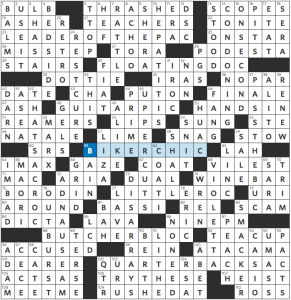 I wasn’t too enthused about the theme at the start, but it grew on me, so I give it the thumbs up.

And there’s some good fill and a few sterling clues here, but there are a couple of difficult crossings as well.

First the good: AD NAUSEAM, (I had AD NAUSEUM at first), OUTBURST, SMACKER, and UPPER CUTS. HEPATITIS is not a nice thing, but I don’t mind it as an entry. Also good, “TRY THESE,” WINE BAR, and somewhat timely PODESTA [Hacking victim of the 2016 campaign].

I wasn’t too keen on the VIOLETTA [“La Traviata” courtesan] / ATACAMA [Chilean desert crossing]. The T made sense, but not knowing for sure, other letters might have worked as well.

Similarly, the RESTCURE / DOTTIE / CHA combo in the NW befuddled me. None of the clues made any sense to me: [Old treatment for a nervous disorder] / [West of Nashville] (I figured this was after a person’s name, but I didn’t know who) / [Oolong, in Brit slang]. I’m still perplexed that RESTCURE is an actual term, and I’ve never heard the slang CHA despite living in England for seven years.

Also, the abbreviation for quarter (QTR) at 102d crossing QUARTERBACKSAC. What’s up with that? Oh, and HUAC [Gp. that investigated the Hollywood 10]? Which crosses SUNG [Performed at the Met]? Don’t tell me you didn’t put SANG in there at first and finished the grid with the erroneous HAAC. Because that’s what I did. (HUAC stands for House Un-American Activities Committee, which I suppose is something I should know, but still. Icky fill.)

There were numerous other trivia-based clues that got to me. However, there were a couple diamonds in the rough, as it were:

Overall, I enjoyed the theme, some of the long fill and a few of the clever clues, but there were other really befuddling moments in the solve that killed the buzz. 3.2 stars.