**Clues referenced in this writeup reflect the clue numbers from the print version. The AcrossLite grid numbering is somewhat different.**

I suppose this one plays much easier for fans of the BBC/Netflix series Black Mirror. Luckily for me, I’m a fan. Bigly. It’s going to be hard to write this post and stay focused on the crossword since I’m so tempted to sing the praises of this show. Suffice it to say that if you’ve never watched an episode, and you’re a fan of dark irony, you’re missing out. Get on it.

And I’m sure CHARLIE BROOKER would approve of this clever grid. 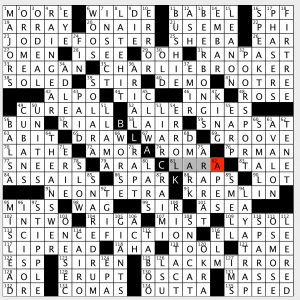 Part I of Theme: Entries that Relate to the Series Itself

23a. [Actress who directed an episode of 125 Across called “Arkangel”] JODIE FOSTER. You can jump into Black Mirror at any point. Like The Twilight Zone, the episodes stand alone. But if you’re new to the series, Arkangel (a take on the perils of helicopter parenting) is a great starting point.

35a. [Screenwriter who created 125 Across] CHARLIE BROOKER.

108a. [Genre for 125 Across] SCIENCE FICTION. This is a broad genre. Some episodes are more “Science Fiction-y” than others. You need not be a fan of stereotypical Sci-Fi to get into this show. 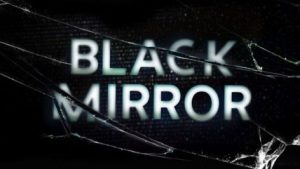 Part II of Theme: Entries that Illustrate the Title, Literally

57a. [Former prime minister Tony, when he spends money in Iran?] RIAL (B)LAIR. Insert a “B” into the black square in the middle, and it serves as the “Mirror” in this entry. RIAL/LAIR are mirror images of one another. Get it?

64a. [Part of a city where people talk with a Southern accent?] DRAW(L) WARD.

76a. [Actress Bow, when she swam in a shrinking body of water?] ARAL (C)LARA

82a. [Hip-hop performances inspired by a flash?] SPAR(K) RAPS

And, of course, the “Mirror” blocks spell out BLACK.

Loved this one. But again, I’m admittedly biased. I filled in Part I of the theme entries with no crossings whatsoever, and (as I’ve learned from that Kevin Bacon puzzle a few weeks back) I read the whole clue for 120a, so grokking the theme was a cinch.

Also liked the symmetry of the central themers, and the staircase formed by BLACK.

Add to the mix a great title, which references both the mirroring aspect of the puzzle and the British-ness of the series, and you have another tightly spun WaPo Sunday. 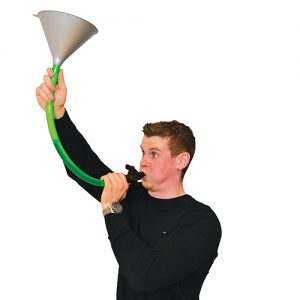 This is a beer bong. Avoid using it with Double IPAs.

13d. [Devices made for fast and heavy drinking] BEER BONGS. Love me my beer, but I’m sad to say that I missed out on the BEER BONG phase of my life. I think it’s because I commuted to college rather than living on campus. Sigh.

18d. [Needle holder] FIR TREE. I thought we all agreed that anything in a clue having to do with the holding of needles yields an answer of ETUI.

112a. [See what I mean?] LIP READ. Fun use of the question mark here- very MISLEADing.

99a. [European capital that hosted the 2014 World Choir Games] RIGA. I had no clue this event existed, but it sounds amazing. Field trip anyone?

63d. [Former NBA star Allen Iverson’s nickname] THE ANSWER. Wow. That is quite the nickname. If I were on the team, I’m sure my moniker would be “The Problem.”

30d. [GOP center?] OLD. I’m super embarrassed to say this, but I had no idea what GOP stood for. Grand Old Party. Who knew? Everyone besides me, I’m guessing.

11d. [Informal term for an adviser of the 43rd president] BUSHIE. Awww. That’s cute. In retrospect.

9d. [Randomizer in “Mario Party” games] DIE. I depend on the WaPo to build my gaming knowledge base.

I’m interested to hear if this one didn’t sit well with non-viewers (a.k.a. future fans) of Black Mirror. While some of the Part II theme answers felt a tad forced (particularly ARAL (C)LARA), it was right in my wheelhouse. 4.5 stars from me and a SLOW CLAP.

Amy is heading out on vacation, and once again I get to blog a debut — which is another collaboration with Erik Agard. Erik has done more, single-handedly, to bring new constructors into the New York Times constructor roster than anyone else in the past couple of years (if there is indeed someone else who has collaborated lately with more new constructors, particularly women and people of color, I’d be interested to know). (Full disclosure: I am also one who has benefited from his guidance and collaboration.) But let’s celebrate Alison, who must be thrilled this evening to see her name there, in the app, and in that glossy magazine, above that grid. Let’s hope these debuts continue to inspire more new constructors, both in collaboration with mentors and those striking out on their own. 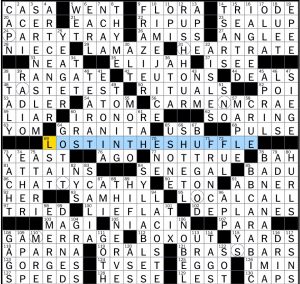 The puzzle! Let’s get there!

What’s going on here? We have two-word phrases, with circled letters. It took a bit of reflection after I’d finished the gird to fully grok the theme gimmick, which is: take out the circled letter, and the leftover letters are anagrams of each other. The circled letters are lost in the shuffle, in that shuffling/anagramming each word tosses them out. They are “Ghosted,” per the title, because add them up and they spell PHANTOMS.

Fill-wise, I AGREE this is a clean grid with some fun, lively entries: SERENA SLAM, LAMAZE, GRANITA, SHTETL, hiiiiiilllllarious comedian APARNA Nancherla (follow her on the tweeters), BBC ARABIC, 80s pop group BANANARAMA covering the 1969 Shocking Blue hit “Venus.” I was into this BUT GOOD. Let’s see more debuts, more women constructors, and more of you veteran constructors taking the time and energy to mentor new folks. She’s got it, baby, she’s got it!

Anagrams. Why did it have to be anagrams?

I don’t actually mind anagrams, but my brain just would not kick into gear this morning and I couldn’t parse two of the theme answers. Thanks to Eric “Slicks” Agard for helping me out.

As you have probably surmised, the theme of this puzzle is anagrams, and as the title suggests they are anagrams of brand names.

I liked this theme even though my brain froze up on me.

What I didn’t know before I did this puzzle: that OTIOSE means “serving no purpose.” Okay. Now I know that. 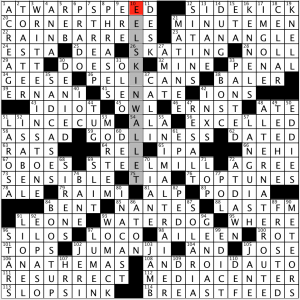 Today’s CRooked is a Sunday-sized themeless from BEQ. It’s chock full o’ names, which usually I do quite well with, but today the coffee has yet to kick in (even though it’s brunchtime) and I was struggling. Five interesting things that I did not know off the top of my head and I had to look up after completing the puzzle: