I took a nap this afternoon. Did I wake up on Thursday? This is a Monday-easy puzzle with a Thursday-style gimmick. I wonder how the people who only do Mondays and Tuesdays feel about this. Either they’re enchanted and venture to try a Thursday, or they’re horrified and feel like they’ve been tricked. I’m with the “enchanted” crowd. I really like this puzzle, and it would have been way too easy on a Thursday.

I had no idea what the theme was until I got to the revealer. I figured there was some connection among the longest answers, because it’s Monday. 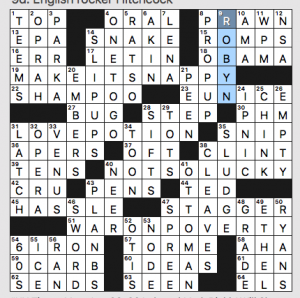 It’s a fun theme about a serious subject, and appropriate for this evening. David and I are headed out to Musikfest in Bethlehem to see The Large Flowerheads, a 60s cover band, so I leave you with a video of the band.

Wait! What I didn’t know before I did this puzzle: I’d never heard of ROBYN Hitchcock, although on investigating his oeuvre, I find I’ve heard some of his music.

ps: I didn’t get Mr Happy Pencil because my software doesn’t like numbers. If there’s a typo in the grid, be kind.

I don’t recall ever seeing veteran constructor ACME’s byline in the WSJ. Is it possible this is a debut? If so, it’s very welcome. 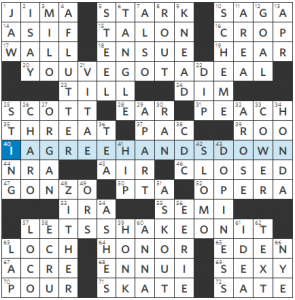 Our theme is Monday-simple, but feeling very clean and fresh. Only three themers grace the grid, each with the same clue (the puzzle’s title), and each is a thing people might say when they come to agreement: YOU’VE GOT A DEAL, I AGREE HANDS DOWN, LET’S SHAKE ON IT.

The middle one strikes me as a little odd. I don’t think I’ve ever heard “hands down” used that way. Usually I hear it in connection with a competition, as in, “Erik won that crossword contest hands down.” Or, “Hands down, that was the most amazing crossword contest final I’ve ever seen.”

With only three theme entries, the fill felt smooth all around. I like AFLUTTER, ASK OUT, and ZITHER crossing GONZO. DOPINESS is fine at 43d, but it feels a little, well, derpy, as my kids say. I wonder if something more interesting could’ve gone there.

Everything else is fairly standard fare, but it’s clean standard fare, and that makes for a good Monday. This is one for newbies to cut their teeth on. 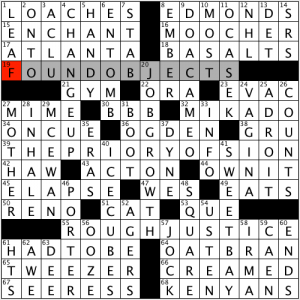 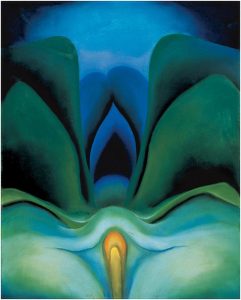 This post has been brought to you by Life Cereal!

17a: SCREEN SAVER [Program for an idle monitor]
22a: COUNTRY STYLE [Rustic]
37a: JAW LINE [Distinctive Jay Leno facial feature]
47a: SPICK AND SPAN [Squeaky-clean]
57a: LIFE PARTNER [Significant other, often, and a hint to the ends of the answers to the starred clues] 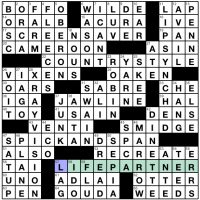 Major joys of this puzzle: The clue for LIFE PARTNER was not gendered or heterocentric! I promise you – stuff like this matters. Bonus points for the inclusion of OSCAR / WILDE and for cluing VIXENS in a non-creepy-male-gaze way, [Female foxes]. Other things I enjoyed: BOFFO, XRAY VISION, CAMEROON, and the inclusions of people of color – Michael CHE, USAIN Bolt, ALI Baba, and Dr. DRE.

Major yikes of this puzzle: The first word in 47a. I know it’s a variant spelling and part of a totally different meaning in this context, but it’s hard to get past the term’s derogatory meaning. IMHO, there are some words that just shouldn’t end up as part of any published puzzle. This would also include 25d in Monday’s NYT, 39d in April 15th’s NYT, and many more.

#includemorewomen: Let’s highlight the women featured in the puzzle! Umm … aside from VIXENS, there are none. ROBIN could have been directly clued with respect to a woman, and so many other pieces of fill could have been clued in the context of women, but they weren’t. That’s certainly another yikes of this puzzle. :/ 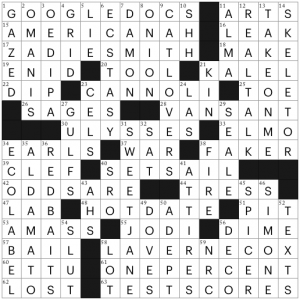 Lovely puzzle from Natan! Look at that top stack, with GOOGLE DOCS, AMERICANAH, and ZADIE SMITH. The only weird crossing is OEDIPA, [Pynchonian executrix ___ Maas]—I haven’t read Thomas Pynchon. The opposite corner has LAVERNE COX, the ONE PERCENT, and school TEST SCORES with Melissa McCarthy-as-Sean SPICER and SWEET JANE crossings. The upper right REAL TALK / TAKE ON ME / SKELETOR stack is pretty too. Other pluses: Gus VAN SANT, CANNOLI, Joyce’s ULYSSES, RED-BAITS, The Ethical SLUT.