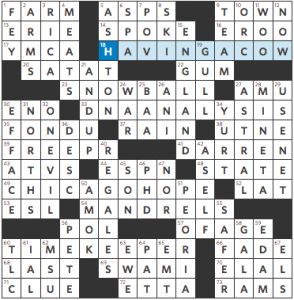 I knew we were in for something when my solving group exploded with messages early on Friday. I avoided them and didn’t get to the puzzle until the afternoon, and then — to quote at least a few folks: “wow!” I like much of Matt’s work, but I’ll go out on a limb and say this was one of my favorites to solve of everything he’s done to date.

We’re looking for a “word for what seven of the clues are.” First off, we know it’s a clue-based meta, with a further hint at [71a: ___ numbers (important parts of a crossword)]: CLUE. So it’s something about the clue numbers, but what precisely? What tipped me off, and what turned out to have been the “aha” moment for most in the informal poll I took of my peeps, was that FEY was clued as [1d: Affected] rather than with the more common reference to Tina. So I had her on my mind (she’s a role model for me — much of what she describes in Bossypants about being one of the few women in the predominantly male world of comedy writing rings true to my experience in comedy writing … and in another predominantly male subculture). I solved the grid in the WSJ webapp, the printed out the pdf (the better to comb through the clues), and there I saw it in the Acrosses: “30 Rock star of note.” (Expressed as a clue/answer in Diary of a Crossword Fiend house style, this would be [30a: Rock star of note]: ENO.)

Aha! I got the gimmick — read the clue, with its number, literally, and find another entry for which that new interpretation could be the clue. Herewith, the entire set:

Take the first letters of the alternate answers in ascending number order, and you get TWOFERS — “a word for what seven of the clues are” — in that, taken as expressions that include the clue numbers, they’re two-for-one in suggesting additional extant entries in the grid. (Solving pal Jeremy also notes that Toofer was a character on 30 Rock.)

Clearly I am [18a: Highly agitated]: HAVING A COW with my love for this one; what’d you all think?