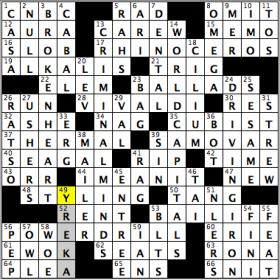 Good day, fellow crossword solvers! I hope you’re doing well as well as staying cool in the heat (if in the event it is pretty toasty where you are right now – as it is on my part of the world)!

Today’s crossword has all of the theme entries going down the grid, with those four longest entries in the grid being two-word answers in which the first word, located in the higher part of the grid, being one that also could come before the word “record.”

Some of the entries might have been tougher to solve for some, highlighted by the odd-looking YREKA (49D: [Northern California city]). That did not throw me off so much, especially since I once saw an episode of “How the States Got Their Shapes” on History Channel and the fact that a section of Northern California and Southern Oregon really wants to secede from those states to create their own state called Jefferson. Yreka was, essentially, the place where this sentiment really gained steam back in the early 1940s. By the way, that series (How the States Got Their Shapes) is AMAZING!

Though it appears in crosswords from time to time, SAMOVAR might have been tricky without its crossings as well (39A: [Russian tea urn]). Same goes for CILIUM, though that’s probably in part because I’m much more used to seeing that in its plural form, cilia, especially when learning about cells, protozoa and the like in elementary and high school (18D: [Eyelash]). So I’m guessing that it’s Scott Joplin that’s being referred to in the clue to RAG than Janis (41D: [Joplin piece]). If in the event it is Janis referenced, then I need to go back through her songs once more!!!! Since we’re one the topic of music, what are your favorite BALLADS (23A: [Story-telling songs])? However, if music like that composed by VIVALDI is more up your alley, that’s more than fine also (28A: [“The Four Seasons” composer])!

Definitely loved seeing visually-appealing RHINOCEROS in the grid, which was my highlight of solving (17A: [Horned herbivore]). Thankfully, I’m working out more and more, and my body mass is less resembling that of a rhino with each passing day!

“Sports will make you smarter” moment of the day: CAREW (13A: [Baseball Hall-of-Famer Rod _____]) – Here’s what you might have already known about Rod Carew, other than that his last name is popular in crosswords; He is one of the few players in Major League history with over 3,000 hits (3,053 hits). What you might not have known is that, starting in his Rookie of the Year campaign in 1967, Carew was elected to the All-Star Game in every season except his last season, in 1985. Also, Carew was one of a number of players who was awarded financial compensation in 1995, 10 years after his retirement, by an arbitrator who ruled that collusion by Major League Baseball owners against a number of free agents in the 1980s had occurred. Collusion by owners to keep a player from employment in their sports teams and leagues?!?!  No way!! *Cough.* Colin Kaepernick!! *Cough.*

Thank you  much for your time today! Have a wonderful rest of your Tuesday and, as always, keep solving!!

When you were a kid, did you ever play with Plato? (Zing!) It seems that today’s constructor did: 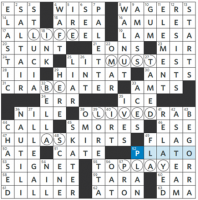 17a: ALL I FEEL [2008 album from R&B singer Ray J]
25a: LITMUS TEST [Evaluation based on a single deciding issue]
31a: CRAB EATER [Antarctic seal]
38a: OLIVE DRAB [Color of WWII army uniforms]
47a: HULA SKIRTS [Grassy garments]
55a: TOP LAYER [Earth’s crust, e.g.]
52a: PLATO [Speaker of the quote found in this puzzle’s circled letters]

My thoughts on the theme:

Biggest ?!?!?! of the puzzle: The SE corner. OLIVE DRAB crossing BEGORRA (!??!) crossing DMA is not friendly to early-week solvers. I lost at least a minute trying to figure out that corner since I’d vaguely heard of the color and had certainly never heard of the [Irish exclamation]. I was also not excited to see LA MESA, III, or IRT, but a total of 59 theme-related squares certainly explains some of the ickier fill. 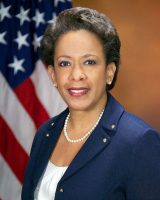 #includemorewomen: The bottom half of the grid has some nice female representation: CATE Blanchett (clued for her accomplishment = yay!), ELAINE from “The Graduate”, Phyllis DILLER (clued for her humor = yay!), Elizabeth Warren D-MA, BELLA from “Twilight”, and [Obama attorney general] LORETTA Lynch, the first African-American woman to serve as U.S. Attorney General. Represent!

Jim P. Here filling in for Amy who’s off getting Floridated. 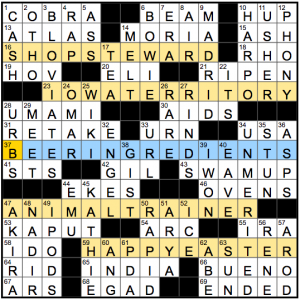 But I really get an overall Tuesday vibe here, meaning I just didn’t get too turned on by it. I certainly like beer and have taken tours of breweries, learning about different kinds of hops and their origins and how they impact the flavor of the beer. But does that make for interesting crossword fare? (I for one am not a hops/IPA guy; they make it taste like you’re drinking flowers.)

I guess what feels off here is that the revealer is so plain-speaking in telling you what’s hidden in the theme answers. Usually there’s some cute wordplay going on (as in HIDDEN “this” or SECRET “that”) which just hints at what to look for. This tells you straight out, and it feels less fun. I know such punny revealers can sometimes be groaners, but I like the wink-wink aspect of them.

One feature I do like here is the fact that the hidden word is different in each answer. That gives the solver just that little bit more uncertainty about what’s coming next. And the fact that the words aren’t circled means the solver must do the work of actually locating and discerning each one. I guess that’s why it makes sense to go with a straightforward revealer and clue on a Tuesday.

Beyond the theme, I love, love, love the word BLOVIATES (3d, [Goes on and on about nothing]); such a fancy word which still somehow manages to be onomatopoeic. UNMERITED isn’t as fun, but it does the job.

Solid grid. The theme felt a little too straightforward for my tastes, but it makes a good step up for someone graduating from Mondays. 3.5 stars from me. 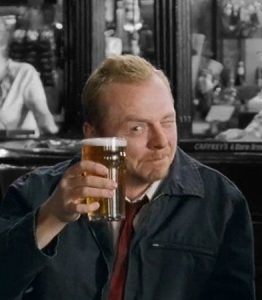 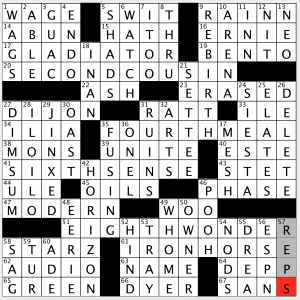 Yes, this is similar to the chant above, but we are talking ordinal numbers, not cardinal numbers. Nice and simple, and yet a pleasure to solve. For what it’s worth, I have never seen the movie The Sixth Sense! No surprise coming from me, I am sure! 4.3 stars today. 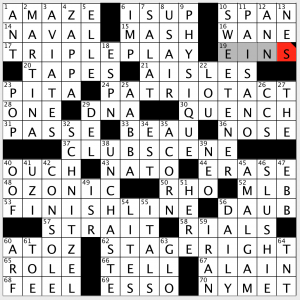 I am vaguely familiar with Jake Halperin’s byline, but his is not one I am used to seeing that often. This is a clever little theme the is perhaps even more fun if you’re a fan of the theater:

Very well done! The terms play, act, scene and line are all on the “right” side of the theme answers. I am not a huge theater fan, but one of these days I will sneak over to Chicago to watch Hamilton! 4.3 stars today.