Evan Birnholz’s Washington Post Variety Puzzle, “Spell It Out: A Meta Hunt from A to Z” – Jim Q’s writeup 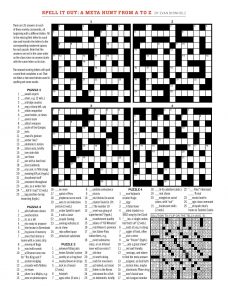 Wow. Just wow. If you haven’t done this puzzle yet, it’s worth downloading a copy, finding a printer, and brandishing your favorite #2 pencil. Get the puzzle here.

Sure, it will take a bit longer than normal to solve (well north of an hour for me), and it may look a tad intimidating, but this is masterful work.

5 big fat stars from me, no question about it.

The puzzle is broken down into four different grids, which have a “cryptic” style look to them. That, and the somewhat confusing directions gave me a momentary twinge of dread- I often can’t finish puzzles without overall interlock (like typical American crosswords have) and my grade school teachers will attest to my lack of direction-following skills. But I also trust Evan’s judgement and skill as a constructor, so I dove in.

The directions ask us to fill in the first missing letter for each of the individual grid’s clues, noting that in each puzzle, one letter will go unused. This part is pretty easy. Then the solver is to transfer the newly entered letters into the boxes that correspond with the clue number.

The next part is, of course, trickier. In a sense, there really are no clue numbers (they’re simply indications of where to enter the letters), and it’s up to the solver to figure out where the actual answers to the clues fit in the grid. I thought this part was tremendous fun as some clues are Monday-level gimmes, and others test your prowess as a puzzler. 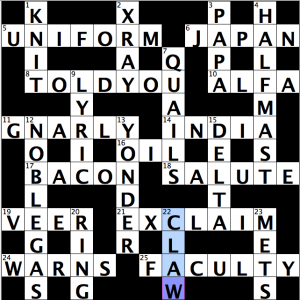 The easiest of the grids for me- for which I was thankful since it was an affirmation that I was solving the puzzle correctly.

I had a small stumble as I inserted L instead of X for the second clue [_enon, e.g. (2 wds.)], but that worked itself out quickly.

The hardest crossing was at LYRIC and BACON since the clues for those were  somewhat difficult (I really wanted SLAW for [Diner side dish]). And, without proper clue numbers, it’s very easy to succumb to doubt as to whether or not you’re filling in the correct blanks for any given clue. However, it’s a very satisfying feeling when it all snaps into place. 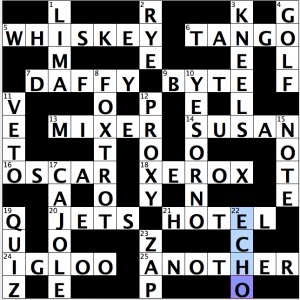 UNUSED LETTER IN CLUES = U

A tad trickier than the first puzzle, but going back to the part where I only had to fill in just the initial letters provided a welcome break from thinking… like watching Wheel of Fortune after Jeopardy!

I immediately searched for a spot to enter TONY [Yul Brynner won one for “The King and I”] and was disappointed (he won an OSCAR). And having no idea who Jordan Spieth was, I had to let all the answers I was confident with settle in before searching for a place to enter a sport- in this case GOLF. But this is part of the fun/appeal of this puzzle- the doubting and narrowing down of possibilities before it comes together.

My only nit about this grid is the awkward clue for NOTE [Xylophone score mark] since the “xylophone” part of that clue is unnecessary (I was looking for somewhere to put STACCATO or something). I suppose that’s the nature of having to clue each entry with a different starting letter. **See Evan’s take on this at bottom of post** 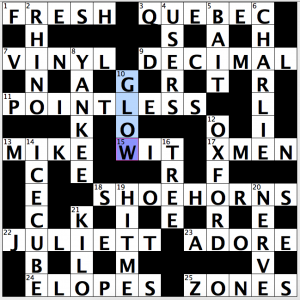 Possibly the most difficult of the quartet for me. And that is mostly due to a confident error I made when I inserted AREAS for [Districts]. Took a looong time for me to suss that out and erase it in favor of ZONES.

JULIETT was very tough and somewhat awkward as well [Soviet submarine class, or an ill-fated lover with an extra T]. If it weren’t for the second half of that clue, I never would’ve gotten it (turns out the entry was necessary for the meta, but we’ll get to that later). 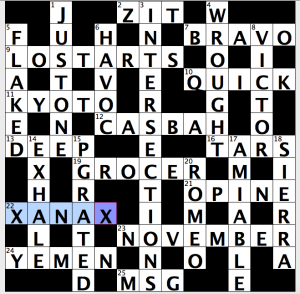 UNUSED LETTER IN CLUES = U

[Like “Frozen” (hyph.)] tripped me up on this one. I think it’s because I have trouble differentiating between “hyph.” and “2 wds.” PG-RATED eventually fell into place, but I feel like I considered every hyphenated thing I could think of… IN-HD? No. SLO-MO?? Maybe there was a SLO-MO scene? like Olaf melting in a very sad way? Nope.

The most important thing to note about this puzzle is the central grid spanner: INTERSECTIONS [Crossings, and where to find the meta answer].

The puzzles were fun enough on their own, and I’d probably have been satisfied had that been the end… but the meta is absolutely astonishing.

In the directions, the solver is told that “The unused starting letters will spell out a word that completes a set. That set hides a two-word device used in spelling out some words.”

That word is ZULU.

In hindsight, I think I might’ve liked a bit less of a nudge here- perhaps just “The answer to this puzzle is a two-word device used in spelling out some words.” Although I didn’t think about trying to determine the meta answer until the grids were completed, it’s probably easy to figure out mid-solve with the meta hint as specific as it is, which could mar the solving experience. It might’ve been nifty to uncover ZULU without being directly told where to look for it, and then figure out independently that it was part of a set.

But then again, Evan has to go for mass appeal- and that approach would probably only satisfy a tiny niche. Besides, he’s taking enough risk publishing a variety puzzle in the first place. 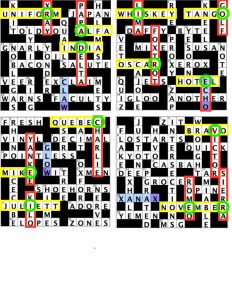 That’s exactly what happens (hence the awkward spelling of JULIETT).

Not only are they all there (with the exception of ZULU of course), but they all intersect. (see screenshot- ignore the blue highlights).

Not only do they all intersect, but the letters at which they do so, spell out- in order mind you- RADIO RECEIVER.

Take a moment to appreciate how well this was done. In four clean, symmetrical (!) grids all of the letters of the phonetic alphabet are used (!!) and- in order (!!!)- all of their intersecting (!!!!) letters spell out a related two word phrase (!!!!!).

Some time ago, Patrick Berry published a puzzle suite where every puzzle on its own was incredible, and they all connected with one another to create a mind-bending meta. This is right up there with those.

I don’t know how Evan is going to meet the bar that he just set with this one, but I’ll be damned if I’m not looking forward to seeing him try.

P.S. When I mentioned to Evan that the only answer I wasn’t confident in was NOTE because of the xylophone clue, he responded with some pretty cool insight:

[…Never, ever write a From A to Z puzzle without a clear plan for the clues beginning with X, Z, Q, J, etc. Especially don’t do that if you have theme answers all over them. The Q and the J you can maybe shoehorn in on some occasions, and the Z too if things break right ….. but the X is murder. So I had to stretch big-time to find something that would sorta work in that puzzle, but I’m hoping that it and the other X’s are gettable.]

They were. Bravo! (no pun intended) 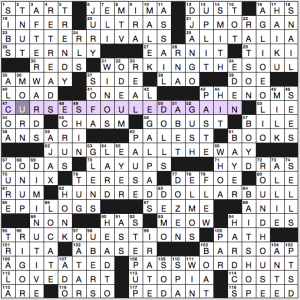 Hearty thanks to the various members of Team Fiend who covered for me during my vacation! It’s good to be back home with my own bed, but I’m missing the swimming pool and my in-laws.

Good title for this theme. Familiar phrases have an I turned into a U, and the resulting goofy phrase is clued accordingly:

Workable letter-change theme, with some mildly amusing theme answers. It would have been more elegant to exclude extra U’s and I’s, though I wouldn’t want an elegant set of supremely dull themers.

Ten more things from throughout the puzzle: 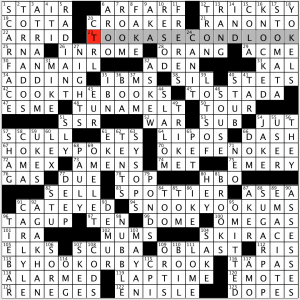 I suspect Cox/Rathvon are on vacation, since this is the third BEQ CRooked I’ve reviewed in a row. Today we have phrases with repeated instances of the abbreviation OK, each of which is over, or by, the letters ME — hence the title; I might’ve chosen “I’m OK, You’re OK” instead.

With a theme like this one, you need LOTS OF down entries containing K. FAKE YOKELS EKE ASKEW UKES, MIKE, IKE & JAKE ride a TRIKE while drinking SAKE and playing SKEE-Ball along the AKER. Gotta DASH because it’s time for lunch; can’t decide between a TUNA MELT or a TOSTADA. I look forward to your FAN MAIL.

Fun theme! Each theme answer has an “s” sound replaced by a “z” sound. Wackiness results. 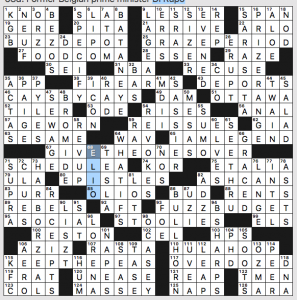 What I didn’t know before I did this puzzle: that there was a Belgian prime minister name ELIO Di Rupo, and that Raymond MASSEY co-starred in Dr. Kildare. I went looking for a clip featuring Massey and found this gem of overacting by none other than William Shatner. Enjoy.