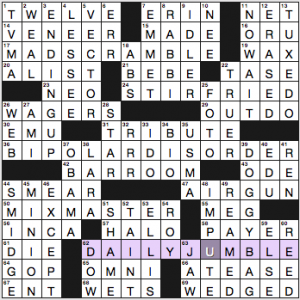 Love the theme! The all-caps theme clues are what would result if you read the theme answers as parts of the clues in a cryptic crossword:

In the fill, I’m partial to SMIDGE, MINION, “NO, WAIT,” and DOGGY BAG. Less thrilled with ORU LESSEE RRR FOTO. 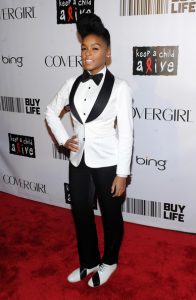 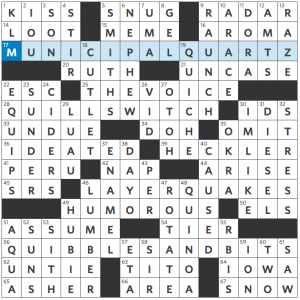 Phrases with a K or a hard C get Qs, resulting in theme entries that are HUMOROUS.

A classic theme-type, substituting one consonant sound for another, well executed without UNDUE STRESS. The Qs in the down entries are common enough — QUICHE, EQUIPS, AQUA, and QUINOA (for a moment I tried to entire QUORN) and don’t LUMBER through the grid. 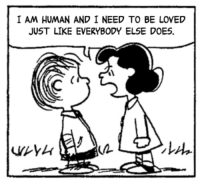 I’M LIKE, how soon can we talk about the fill? How soon until we can talk about The [5d: Band fronted by Morrissey {and let’s not forget Johnny Marr}]: SMITHS? How soon is now? It’s difficult to overestimate how important they were to a midwestern nerdgirl weirdo way back in the 1980s, with their unthreatening tortured yet gentle poetic masculinity. There’s an amazing Tumblr called This Charming Charlie, which substitutes Smiths lyrics for the word balloons in old Peanuts cartoons. The Tumblrista was sent several cease-and-desist letters by Universal (which holds the copyright to the Smiths’ lyrics), but her lawyer made an excellent fair use argument and Universal dropped the suit. 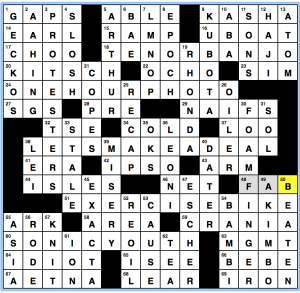 It’s our own Laura Braunstein’s first AVCX puzzle as a regular contributor over there, and “Eminent Domains” is possibly the most I’ve smiled at a puzzle theme in a while.  This one’s charming as heck, y’all – go solve it.

Admittedly, my work as a person who does internet stuff made me well suited to make quick work of this theme, which felt easier than its 3.5/5 difficulty rating:

UGH, this is so good.  The fun part about domain name extensions is that if you’re wordplay-minded (so: me), you can find fun ways to play with their conventions (say, buying the domain goodatinter.net if you’re, uh, good at finding shiny pieces of the internet and putting them all in one place, like me).  I can’t guarantee the contents of the actual pages (if any) of the URLs in today’s puzzle, but dang these are some good internet domain extension-based answers.

In other internet news, I recently taught a computer how to write Eurovision song titles. 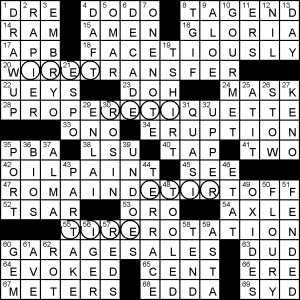 If you solved the NY Times first, you will likely be experiencing deja vu. Ms. Kathy Wienberg’s name appears in both bylines, though in this puzzle she has teamed up with her husband (?) Roger. TIREROTATION – does anybody really do that? I know we should, but isn’t it one of those things like flossing that everyone knows we should do but no-one actually does? Like a couple of other puzzles this year, it involves revolving through different sequences of a tetragram. The other answers are WIRETRANSFER, and the spanning pair of PROPERETIQUETTE and ROMAINDETIRTOFF. I had no idea about that factoid, and indeed my final square was AL_A/RO_AIN. I guessed correctly, but the B seemed at least as plausible. It is definitely a fun name to say!

What made me pause: [In fun] for FACETIOUSLY; the latter feels more snarky than fun… [Rust and lime], OXIDES – a simple clue, but one I enjoyed.