The Fireball puzzle is still on summer vacation. 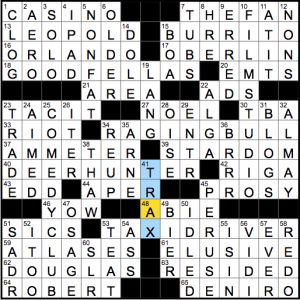 I did not like this puzzle, and I am going to say why. I will do my best to be respectful and thoughtful, but if negative critiques are not your thing, you may want to skip this one.

In some ways, this puzzle is tremendously ambitious:

In many other ways, this puzzle does not work:

I don’t know whether there was any version of this puzzle I would have enjoyed. The idea of “here are eight symmetrical things about a timely celebrity” gets tiresome in a 15×15 puzzle (to say nothing of a 21×21 — I’m looking at you, every 100th anniversary puzzle). If, perhaps, there had been an interesting commonality among a few of DE NIRO‘s movie titles, that might have been a nice jumping-off point for this puzzle. But I don’t see what’s interesting about listing six or eight of about a hundred titles of a man whose birthday is tomorrow except, maybe, being reminded of a time before De Niro’s career took a swift zag into Dirty Grandpa-land.

This was an interesting solve, particularly for someone whose day job is all about books, and very tough in some spots. Oh! Jim P. is on vacation — that’s why I’ve covered a few WSJ puzzles for him lately. Soon he’ll return the favor. 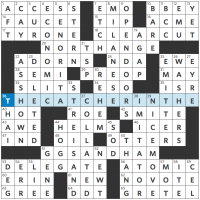 We have three novel titles that pop-up into the grid, one of which completes itself with the pop-up (with a beautiful reversed character name of someone who is in the title of the book for which she is the heroine and it is one of the best novels of all time, don’t @ me), and the other two of which take another turn into nonsense (on their own) entries in the grid, clued as [CLUED ELSEWHERE]. My thoughts? 36a was so lovely and perfect; I would’ve liked to see the same elegance with the other themers. But I love the concept. So, yeah — I knew 20a would be an Austen novel — pretty much everyone in the Austenverse ends up in Bath at some point. My fave of hers, Persuasion, is mostly set in Bath, and it was also published posthumously, like Northanger Abbey (think, just think, about what she could’ve done had she access to modern medical care). Moving on to Mr. J. D. Salinger, famous local New Hampshire recluse who in his senescence used to haunt my place of employment and once — I shit you not — asked me to help him with the copier, because none of those other phonies would. In a feat of regional coincidence, our next author is Theodore Geisel, a.k.a. Dr. Seuss, after whom the medical school at my place of employment is named (I mean, he isn’t even a real doctor). This one was tougher because it could’ve been any one of his famed limited-word tomes (okay, The Cat in the Hat has 236 words).

And wow, did I have some tough spots with the fill. That’s why I’ve posted my time as “untimed.” I had to run the alphabet at the [61a: Opposite of full]: NEW and [52d: Hellbender’s cousin]: NEWT crossing. Didn’t know, but wasn’t surprised, that STREISAND was the [33d: Only artist to have a #1 album in every decade since the 1960s]. 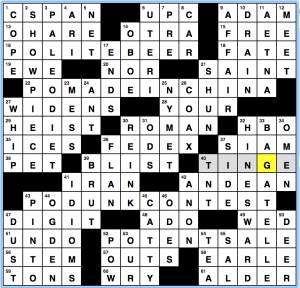 Based on today’s title, I figured the BEQ Thursday puzzle was going to have rebus squares (“PO boxes”), but it turns out I was wrong:

LITE BEER, MADE IN CHINA, DUNK CONTEST, and TENT SALE are all things/phrases, and they become goofier phrases when you stick PO in front of them.

Please enjoy this song from noted 80s band The Lice 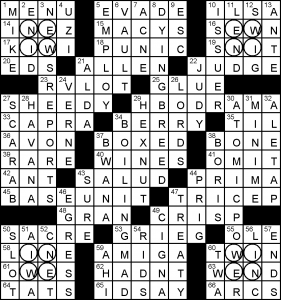 What I appreciated most in this plus-sized (16-tall) grid is the design. Many puzzles with corner themes are too ambitious with the design of said corners, causing the puzzle to go to hell in a handbasket. This one makes them into four self-contained areas, which limits the damage somewhat. My puzzle didn’t have circles, but I added them, since without them, the effect is difficult to appreciate. BOXED/WINES (or as the KIWIs call them, chateau cardboard) are found in four corners. The rest of the puzzle plays out as a two-day early themeless, for better or worse.