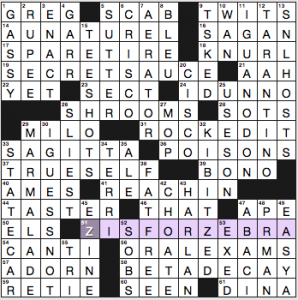 OK, I gotta be quick here.

Likes: AU NATUREL (thinking I was looking for a 9-letter word, that N felt so wrong), SPARE TIRE (clued as a car part instead of flab, yay!), SECRET SAUCE, SHROOMS, ROCKED IT, your TRUE SELF, “Z” IS FOR ZEBRA (the best letter), MARMALADE, KIBITZED, and IGUANODON. And SNL HOSTS feels fresh and new.

Irked by: The I/not overlap in I GUESS NOT and I DUNNO and CAN’T I. SLIEST spelled with an I. A cutesy question-marked clue, [Spinner?], instead of a gendered clue, for the gendered term P.R. MAN—which is especially bogus because P.R. is such a heavily female field now; ban this dinosaur answer. SOTS, ugh.

Four stars from me. Toodle-oo!

Jim P. here covering for Laura who covered for me earlier this week. There’s a lot of that going on around here.

We have a before-and-after theme here today but there’s an added twist. The “after” parts are all trademarked brand names. 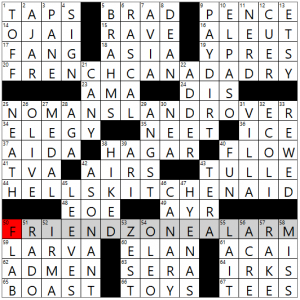 That negative aside, I really like the stacked sets of 6s in the north and south: BRAHMS/RASCAL and CANARY/HYENAS. Also good is the lovely PAYDIRT. 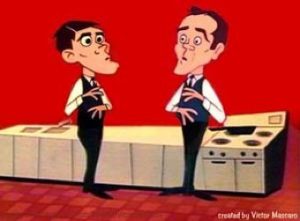 Dick York and Dick Sargent both played the character Darrin on “Bewitched.”

Speaking of which, the “Digging Deep” award goes to the clue at 62a: [Darrin Stephens’s colleagues on “Bewitched”]. Darrin was a slogan writer, and so his colleagues were ADMEN. But the real question is, which Dick are you? Are you Team York or Team Sargent? Here’s the story of how York left the show and was replaced by Sargent. It’s not what you think.
I got hung up at 65a [Blowhard’s offering] which, for some reason, I wanted to be BLAST. It didn’t help that I didn’t recognize the [High-end Swiss watch] RADO. RADL seemed just as plausible, because, you know, those crazy Swiss!

I like a good before-and-after theme, and this one was nice, except for one entry. 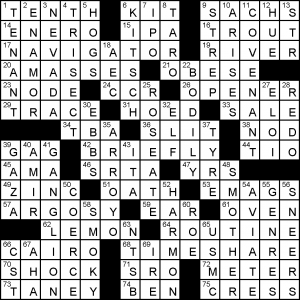 When you first look at this grid, it doesn’t look like a typical themed puzzle. The long answers don’t jump out at you, but the 2 9’s, 2 8’s and central 7 are the longest in the puzzle. They are shorter because they are all one word answers, except they have been repurposed to be two words, as their second half is an animal: NAVI/GATOR, BRIE/FLY, TIMES/HARE, COVEN/ANT, GANG/LION. Cute, if rather broadly defined.

41 themes squares means clean fill, right? What the hell are we resorting to AMIR crossing ARGOSY with TANEY thrown into a quiet corner then? The opposite side has STR/ELOI/TIO, the last two acceptable in a pinch, but there is no pinch there so, why?