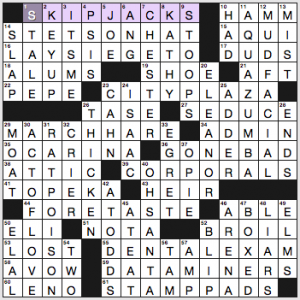 A bit easier than the Friday NYT, for me, even though I needed to work the crossings to figure out 1-Across. [Certain fish … or sailboats]? Those are SKIPJACKS? Alrighty then.

Among the better entries, we have LAY SIEGE TO, FORETASTE (which really is not the opposite of aftertaste, but should be), DATA MINERS (I guess … is that what people engaged in data mining are called?), ACT OF LOVE (boy oh boy, right beside RAT POISON—don’t trust your lover?), and AQUA ZUMBA.

Did not know: 40d. [Mariah Carey holiday song that was a #1 Adult Contemporary hit], OH SANTA. “All I Want for Christmas Is You” is much better known but doesn’t fit into 7 squares). Also didn’t know: 8d. [Lead female role in “Singin’ in the Rain”], KATHY.

23a. [Urban open space], CITY PLAZA. I tried CITY PARKS here, as “open space” can be one area or a bunch of areas. “City plaza” is not a familiar phrase to me.

50a. [Priest in the Books of Samuel], ELI. I’m almost done with 1 Samuel in the IBBLE anagramming app. I must say, I like this book better than all the gore and the ceaseless repetition that has come before it. #TeamDavid (No spoilers, please—if he becomes terrible in the next book, I will find out soon enough.)

Wasn’t in love with the fill overall, but there’s nothing so grievous in it. (Boo on cluing ADDER, a perfectly respectable snake, as a roll-your-own word instead, with [Summer] meaning “one who calculates sums” even though nobody would use that.) 3.75 stars from me.

Movie titles are given a G-rating, i.e. they have a G added to the start of certain keywords. 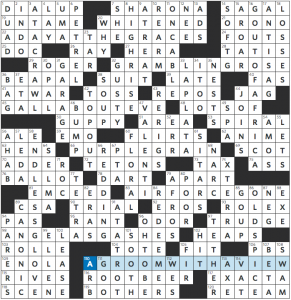 I like the consistency of focusing on film titles, given the title of the puzzle. I got a couple chuckles here and there, but mostly I didn’t get the thrill.

Not-so-good fill: LOTS OF, RIVES, ANTI-SAG crossing TATIS, ARB, and really ucky partial OH TO BE. Also, quite a few RE- words: RE-ARM, REPOS, RE-TEAM, RE-RIGS (REDEEMER gets a pass), and AT phrases: AT A CRAWL, AT A TROT, and AT WAR. 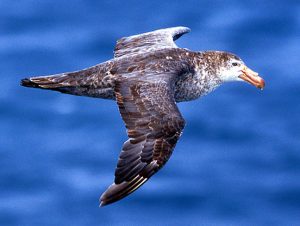 New to me: VALENTI [Longtime Motion Picture Association of America president Jack], the aforementioned TATIS [Fernando who got two grand slams in a single inning in 1999] (though that is a remarkable stat!), and PETREL [Far-flying seabird]. Oh, and LA PLATA [Port southeast of Buenos Aires]. At first I had LAPLACE, but then I realized I was thinking of the mathematical “Laplace Transform” guy. I momentarily tried to stretch out LA PAZ to get it to fit, but obviously that didn’t work.

Hit and miss for me today. The theme is consistent and solidly executed, but I didn’t feel a sparkle. And much of the fill was noticeably troublesome. 3.2 stars. 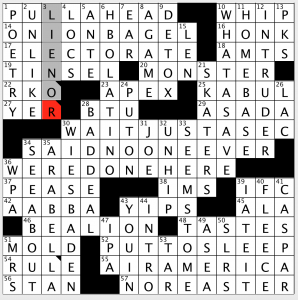 I was having issues with my Across Lite timer. On my Mac, it doesn’t shut off when the puzzle is done. I turned on the “Switch off timing” toggle, which says it will score on correctness only, but the timer doesn’t start. In watching the Downs-Only streams, the version of Across Lite on there shuts off when they are done. I think. Maybe it doesn’t. Anyway, my time was in the 7-8 minute range, which is about right for a Saturday LAT challenge. This is a great collaboration by the collaborations king Erik Agard and Tracy Bennett. Shoot, before it’s all said and done, I wouldn’t be surprised if you see MY name next to his in a byline! A super-low 66-word puzzle today with awesome fill. I would love to know who did what. Erik is, of course, the reigning ACPT champ, but Tracy is a great constructor in her own right! A solid 4.8 stars for this one!

I could go on, because there is lots of good stuff in here, but I have to blog three more puzzles this weekend! Understandably, you will see my words again soon! 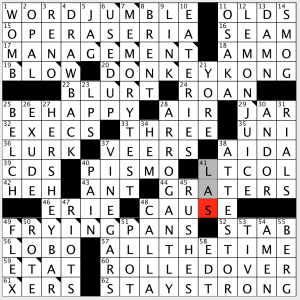 Again, I have Across Lite timer issues, so this time was in the 17-18 minute range. Yes, there are tons of error marks in here, but that’s because I used the check answer feature waaaay too early. Sometimes I don’t have enough patience, especially since I know I have to get these Stumpers done by a certain time! I have seen Greg Johnson’s byline for LAT Saturday themeless puzzles, but I don’t remember his too often for Stumpers. Is this one of his first ones? Or has it just been a while? 72 words in this one, which is about the upper limit for a themeless, but there are tons of great entries in here. I don’t see anything crosswordese-y at all. I’ll take that over 2 or 4 less words. 4.7 stars from me.

I hope everyone has fun at Lollapuzzoola today! My home version puzzles are coming sometime tomorrow, hopefully! Wish I could be there! I am actually visiting my dad in Kentucky this weekend, so I will try to monitor Twitter to see who wins!