Currently on a train to Lollapuzzoola and trying to balance a cup of coffee while typing on my Mac. Doesn’t BODE well.

Add a double letter theme today! And there are quite a few of those themers. 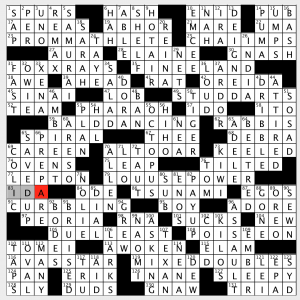 23a. [High school calculus whiz who may be crowned queen?] PROM MATHLETE. M-M has been added to PRO ATHLETE.

25a. [Little devils who love spiced tea?] CHAI IMPS. From CHAMPS. Get it?

31a. [Images of a cunning creature’s skeleton?] FOX X-RAYS.

49a. [Macho one’s bar game?] STUD DARTS. For some reason, I kept reading “Macho” as a verb instead of an adjective.

105a. [Have fewer sword fights than everyone else?] DUEL LEAST.

108a. [Period of composure that lasts a long time?] POISE EON.

119a. [Type of tennis match, and what’s spelled out by the pairs of letters added to 12 phrases in this puzzle] MIXED DOUBLES.

I have a tendency to jump around a grid when solving- not sure if that’s a good thing, but I usually can’t help it (I’m very easily distracted by shiny objects too). However, this time I solved consistently from North to South, and after entering the first three theme answers, I noticed the added letters were going to spell something.

In a way, I was sorta bummed when I got to the revealer because I had felt like I was in on a secret. 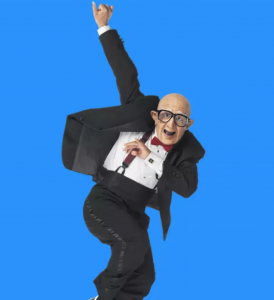 Remember this guy? The epitome of bald dancing.

While certainly consistent, the sheer number of themers requires them to be relatively short. Also, with the constraint of keeping them in order and with the added letter in the center, the result is that sometimes the base word/phrase or the resulting phrase isn’t all that exciting. For example, while I love STUD DARTS (I mean love the entry… I’ve never played STUD DARTS, but it’s on my bucket list), the base phrase STUARTS doesn’t mean much to me. On the other hand, POISON seems a solid enough base, but POISE EON feels a bit off.

PROM MATHLETE (from PRO ATHLETE) is an example of one that lands for me because both the base phrase and the alteration are more than one word. See also DUEL LEAST and LOU, USE POWER! And while BALANCING is indeed a one-word base, the imagery of BALD DANCING is delightful. So that one gets a pass.

14a. [Manhattan station?] PUB. Manhattan the drink as opposed to my current destination. Good one.

53a. [Ruler who may be depicted with an ankh] PHARAOH. I am forever destined to question my spelling of this word thanks to that darned horse from a few years back.

22a. [Thurman of “Jennifer 8”] UMA. Never heard of this movie! But love me some UMA trivia!

68a. [Messing around in Hollywood?] DEBRA. I’m currently solving a variety puzzle series and got very stuck on one specifically because I wasn’t sure how her name was spelled. This clears it up for me AND I don’t feel like I cheated! Thanks!

TOUGH STUFF: (And by “tough” I mean I just didn’t know it- Evan is always good at avoiding the dreaded Natick square)

77a. [A neutral one is called a neutrino] LEPTON. I must’ve been absent on the day they went over this in science class.

Were there a lot of basketball references for a tennis themed puzzle? Or is that just me?

Fun and ambitious puzzle- even if I wasn’t thrilled by all the theme answers. 3.5 Stars from me. 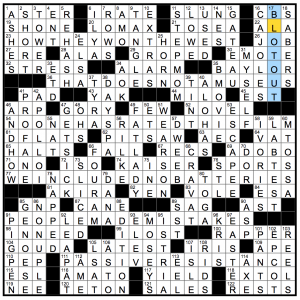 This theme wasn’t clear to me at first, but thankfully there is a revealer at the end to make things clear.

I am not a grammar instructor, but the original phrases I think are all in the active tense, whereas the phrases in the grid are all in the passive tense. The subject of the sentence is changed, so in How the West Was Won, “West” is the subject, but in the grid phrase “they” is the subject of the sentence. This is pretty clever, even if you’re not an expert in grammar usage, like I am not! (Amendment: see Ethan’s comment below!) But that doesn’t detract from the great solving experience. This played a tad tougher than a normal Sunday to me, but still cracked it in under 15 min. Had a slight issue with the upper right corner, since I had ME instead of US at the end of 36A! A solid 4.3 stars from me for this one.

Lotsa good stuff to talk about:

I will stop there. How did you all like this one? 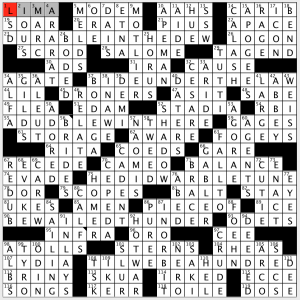 I have the privilege of blogging a puzzle by Cox and Rathvon this morning! I often mention lists of my favorite constructors, and this duo is always on my short list. I have been enjoying their puzzles for literally 25+ years now, and they just keep on coming. They churn out so many good puzzles of a wide variety, I am not sure how they do it. Apologies if I seem like I am geeking out a little, but I am!

Todays puzzle does not have a tricky theme at all: there are six theme answers that only contain the letters found in the phrase RED WHITE AND BLUE:

It’s so straightforward that I was a little confused at first! There are no puns, other than the clues, which all have a patriotic bent to them. Very clever. And slightly untimely; perhaps this would play well near Memorial Day or July 4? Maybe it wasn’t ready yet then? This puzzle was also a little tough in some spots; there are a few answers in here I am totally unfamiliar with, and I will try to mention a few of these below. All in all, a fun CRooked Sunday puzzle. 4.3 stars from me.

That is all for this morning. Emily and Henry, thank you for literally decades of enjoyable solving!

Lots of driving, lots of puzzles, lots of fun. Lollapuzzoola #11 is in the books and I am TIRED. This puzzle was a good before-bed treat. For the theme, we take a well-known base phrase or title and substitute a sound-alike type of bread. Wackiness results. 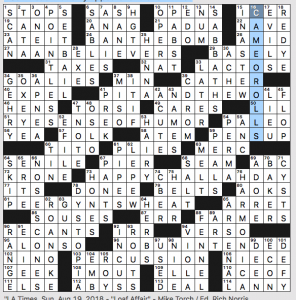 A very solid theme with that one minor exception. Not too challenging (which is good in my current state) and still a lot of fun.

There was some blah fill, most notably ANAG, which is not really an abbreviation for ANAGRAM, and ICER which is never seen outside of crosswords.

Too tired for anything other than What I Didn’t Know Before I Did This Puzzle: that LANNY Wadkins is working for The Gold Channel.