This may have been my fastest time ever on a Monday puzzle. I suspect it would have been a smidgen faster on paper since I had a couple of typos I fixed while solving. It’s a Monday with a solid but not particularly interesting theme. 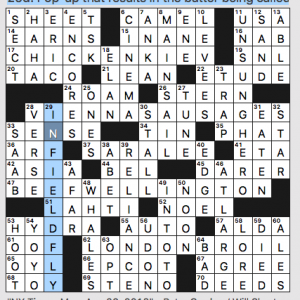 {deleted tangent about the question of why chicken is considered “meat” for the purpose of kashrut} Maybe it’s the aforementioned deleted tangent, but “chicken” seems out of place to me. VIENNA SAUSAGES are pork. I’d find it more appealing if each was a different kind of meat, or if they were all the same kind of meat. Leaving that aside, it’s still not a compelling theme.

What I didn’t know before I did this puzzle: that Peter Gordon created easy puzzles.

Quick! Let’s get into this Monday LAT puzzle, which I loved! 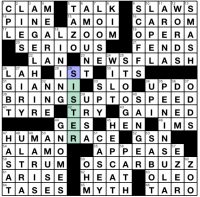 17a: LEGAL ZOOM [Online site for making a will]
23a: NEWS FLASH [Ironic exclamation before an unsurprising announcement]
38a: BRING UP TO SPEED [Fills (someone) in about the latest developments]
47a: HUMAN RACE [All people, with “the”]
59a: OSCAR BUZZ [Hollywood pre-award speculation]

I am here for this Monday puzzle. The theme is straightforward – each themer ends with a word that can also be synonymous with the verb go quickly (by) – and the entries felt modern, in the language, and/or inclusive. What made the puzzle for me, though, were a few lovely moments of fill that show that being inclusive in crosswords is possible:

I also enjoyed the clue of [Coop layer] for HEN and only slightly minded the bit of meh fill (CAROM LAN CPL UPI SABOT EZER). Overall, the puzzle was one I could ZOOM / FLASH / SPEED / RACE / BUZZ through and made me smile. 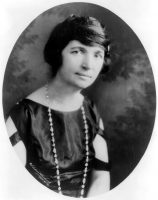 #includemorewomen: This grid features Anne MEARA along with the Brontë sisters and Lil KIM, but I want to focus on the woman I was most excited to see included: [Birth control activist] Margaret SANGER! According to her Wikipedia page, SANGER “popularized the term ‘birth control’, opened the first birth control clinic in the United States, and established organizations that evolved into the Planned Parenthood Federation of America.” I can easily see how a constructor or editor might avoid including her because of some fear of controversy, so I appreciated seeing her represented, and clearly clued with respect to her feminist claim to fame. She did a tremendous amount to advance the cause of women’s reproductive rights, though it’s important to note that she was “criticized for supporting negative eugenics” because she argued that the “unfit” shouldn’t reproduce. As always, historical figures can be quite complex and it’s important to evaluate the full legacy, but her impact on women’s choices in modern society is undeniable.

Anagram theme revealed by the answer at 37a: EXCHANGE RATES [Money-converting numbers, and a hint to the last words of the starred answers]. The final word of each theme answer is an anagram of RATES. 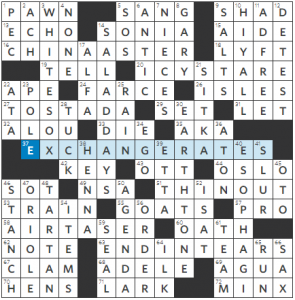 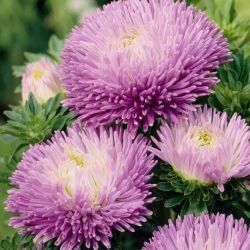 I wasn’t feeling this one, mainly because EXCHANGE means to swap things out, not mix them up. Add to that the unfamiliarity of the first and third entries, and my eyebrows were in the raised position for a good portion of the solve.

But put that aside and let’s look at the fill. Zhouqin is a master at smooth, fun fill, and she doesn’t disappoint in that department here. WHITE SOX, EARTH TONE, ESOPHAGI, and especially SALAD DAYS are the highlights here. I also like SITKA, “HI, Y’ALL,” THIN OUT, and TARTAN.

The usual crosswordesey suspects sneak in (OTT, ALOU, ACH, etc.) but nothing too oddball.

I enjoyed the fill more than the theme here which felt a little off to me. Three stars. 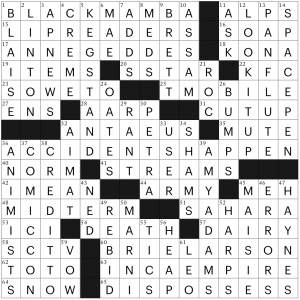 Happy Monday, everyone!  It was great to see people at last weekend’s Lollapuzzoola, and in (what was a shocking turn of events for me) I managed to place 9th in the Local division, my best placement at a tournament ever.  I wasn’t paying any attention to the scoreboard and was just going for a clean solve, and apparently did that.  I credit a lot of that to the New Yorker themelesses – the cluing on these bends my brain in the right way.

This week’s entry from KAC felt like it was missing some of his usual high-low that I look for, but it was right on my wavelength, since this is the fastest I think I’ve ever been on one of these – just under 7 minutes.  More notes after a music break:

Dear constructors: please put MITSKI in a grid. Her new album, Be the Cowboy, is fantastic.

This felt just okay for a KAC puzzle, and I expect a little more pizzazz from both him and the New Yorker when it comes to themelesses. 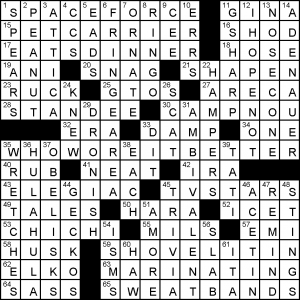 Excellent seeds: timely SPACEFORCE to open with PETCARRIER below, plus a central 15 of WHOWOREITBETTER, which is fresh as daisies and a perfect 15. It does have a feel of SHOVELITIN in places with medium answers like DRONISH and STANDEE making my overall experience a tad AMBIVALENT.