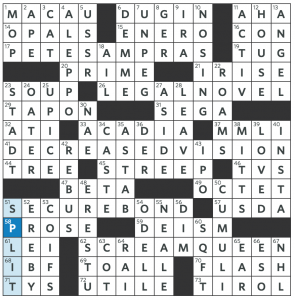 This is my first time on Fiend blogging a contest puzzle, but here goes! This one played tough for me. The puzzle was not so bad to solve, but I had no idea what was going on until I picked Dave Sullivan’s brain. Here are the theme answers, and then I will feebly attempt to explain what is going on:

So what do all these letter counts mean? I had no idea either, until I contacted Dave. The title “Divide and Conquer” is a huge hint. If you “divide” the theme answers, the first and last parts make up a word that can go after “split,” which means divide. Hence:

Here is where the leap is needed: the second letter count is the enumeration of that the “split” phrase is. And it isn’t readily clear, at least to me:

The first letters of these five descriptors spell SHIFT, and SPLIT SHIFT is the answer I submitted. While this may not be my favorite Matt Gaffney contest puzzle, this is still clever with a few levels to peel away. I also like on Matt’s own MGWCC site where you know if you’re right or not within a short time, but on the WSJ site you just have to wait and see on Thursday night if they are going to send you a mug! (For the record, I have NOT received either a mug OR a MGWCC pencil set!!)

I think overall this is a phenomenal idea, but some of the mental jumps seem to be a little hard to process. But bear in mind: I am not the greatest at solving crossword contests, although this month I DO have 3 out of 5 solved on Matt’s site! I have never completed a month there, and that is on my bucket list of things to accomplish!! Anyway, what do you folks think? I will still give this 4.3 stars.