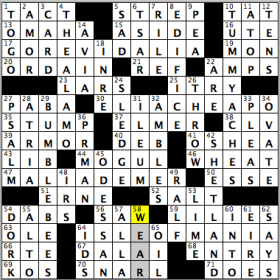 Hello once again, crossword lovers! I hope you’re all doing well today, and I also hope that some of you were able to make it out to Lollapuzzoola this past weekend in New York City, the wonderful crossword tournament that takes place on a Saturday in August. Over 400 people showed up to solve some wonderful puzzles as well as create such a welcoming and festive atmosphere, especially for a number of people who were competing in their first-ever crossword puzzle tournament! If you were not able to make it out East but still want to solve the grids, definitely sign up to receive the puzzles and be part of the at-home division. You’ll thank me later for it: these grids are that good!

Speaking of good grids, we have one in front of us with today’s Crossword Nation, as we get a little taste of the Hawkeye State in each theme entry. In those entries, puns are created when adding the postal code of Iowa, “IA,” to phrases/proper nouns, with those entried clued pretty wackily…and humorously.

The presence of AMOR at the top, and my unfamiliarity with the author, made me have to jump around the grid at the beginning of my solve (2D: [“Rules of Civility” author ____ Towles]). Outside of that, it was pretty smooth sailing with the solve, especially when I plunked down THE ALAMO and was able to work off the bottom part of that entry to get a foothold in the puzzle (4D: [Mission to remember]). I don’t think I have ever seen PABA in a grid before, but that definitely stood out for me when solving because of the times when I started taking it for my case of vitiligo that was discovered in high school (27A: [Sunscreen additive]). Before too long, I stopped with the medicines and chemicals and just said, “Hey! I look good no matter what these patches look like, and people who judge me by my actions instead of my looks are the people I need to be concerned about more!” Definitely not easy going through such a visible change while in high school and being trying my best to not let certain comments about it get to me, but it all turned out good in the end!

Yup, definitely put me in the list of people who experience TUMMY ACHES on Thanksgiving, but, with the way my mother continues to make some delicious meals on that day, it’s definitely worth it (10D: [Some gut feelings on Thanksgiving night]). Well, I’ll feel those pains inside my tummy if I haven’t been knocked out and sleeping on my bed by then.

Please tell me that at least one of you had Peter Gabriel’s well-known hit ’80s song when reading the clue for (and filling in) SLEDGE (24D: [Hammer head?]). No? OK, maybe I’m the only ’80s music junkie here. I was able to head to Brighton Beach at one point this summer, which means I got to see an ODESSAN or two (well, more like hundreds) while at the beach, given that that area of Brooklyn is nicknamed “Little Odessa” – and for good reason (45D: [Resident of a Black Sea city]). Hopefully, I can make it to a beach one more time before the end of the summer, despite my lack of a beach body!!

“Sports will make you smarter” moment of the day: STUMP (35A: [Baffle]) – While the New York Yankees had a tremendous amount of success in the decade of the 1990s, the beginning of that decade was far from rosy, with the manager of the moribund Bronx Bombers of 1990 and 1991 being a person named STUMP Merrill. Merrill took over the hot seat in June of 1990 after Bucky Dent (a.k.a. Bucky “BLEEPING” Dent to Red Sox fans) was fired two months into the season. Those 1990 Yankees ended up finishing 67-95 on the season, only the fourth time the Yankees finished in last place in the American League. After Merrill came back for the 1991 season and oversaw another 90-loss season for the Yankees (71-91), he was fired from his manger job and replaced by Buck Showalter. Showalter, along with his successor, Joe Torre, helped to usher in what would become the latest New York Yankees dynasty in the 10 or so years that followed Merrill’s dismissal.

Thank you so very much for your time once more! Have a wonderful rest of your Tuesday and, as always, keep solving!! 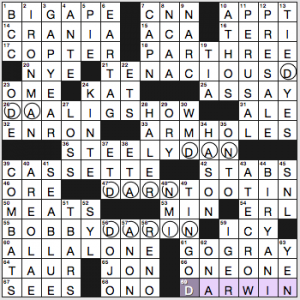 Neat science-adjacent theme coconstructed by a biology teacher (Ms. Yañes). DARWIN is clued as 69a. [Evolution theorist … or what the circled letters are evolving toward?]. The circled words in the other 5 themers are “evolving” their way to spelling out DARWIN: TENACIOUS D, then DA ALI G SHOW, then STEELY DAN, DARN TOOTIN’, and BOBBY DARIN. The sly inclusion of BIG APE (1a. [Galoot]) opposite DARWIN adds another layer.

Fave fill: IRON MAN, GAP YEAR, tasty BIRYANI, TIE-DYES, and SEA BLUE (I am in love with the shade of blue Lake Michigan is on a cloudless day).

Overall, though, the fill felt kinda rough. A surfeit of abbrevs and things that feel like abbrevs: CNN APPT ACA MIN TAUR- BCC SYL ETS ETA ETD NCAA CAP’N WMD SNL NMI? This feels like WTM (way too much). There’s also some crosswordese and other stuff that might be a reach for a newer Tuesday solver: ERL ANON IGER ORY AREOLAE. ONE ONE is not good fill, but I think the clue here made it terrible: 66a. [New Year’s Day]. Nobody anywhere ever spells out the month/date numbers like that! Come on. No. 23a. [Queen Gertrude’s “alas” in “Hamlet”], “O ME” also feels like a stretch. HAS ON right above ON A and next to ONTO is too much ON density, too.

I’d have liked this puzzle better with a rejiggered diagram that doesn’t include all those stacked 6s and 7s in the corners, because that longish fill isn’t worth the many tradeoffs in the short fill.

Four stars for the theme, two for the fill.

What are you? This existential question partially guides us through the Tuesday WSJ puzzle: 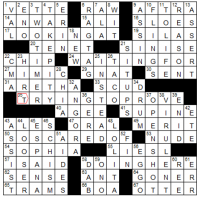 Quick post about this week’s puzzle because back to school teacher meetings just started up for me and I’m spent! I sadly did not enjoy this puzzle, and my reaction was essentially 35a. I kept waiting for there to be an extra revealer or a reason why these five phrases were used as themers and others weren’t. All of them starting with the same Line of Inquiry (as the title indicates) didn’t do anything for me.

On top of that, the online solving applet was being especially wonky across multiple browsers and there were a lotttttttt of proper nouns (VETTE ANWAR ALI SILAS SINISE ARETHA AGEE SOPHIA LIESL VAL ENO HIRT ESPANA ERIN GERE ONO LOLITA ENID) for a Tuesday.

Even still, my solve time for this puzzle was a minute less than my Tuesday WSJ average, so I’ll take that as a positive of the puzzle. 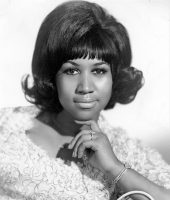 #includemorewomen: After last week’s memorial in this part of my review, we have another one! The one and only ARETHA Franklin. Her discography and impact on the world are undeniable, and I hope you’ll take some time to look up some of her recordings on YouTube. Our culture and music would not be where they are without her influence. For now, I’ll just say: Rest in Peace. 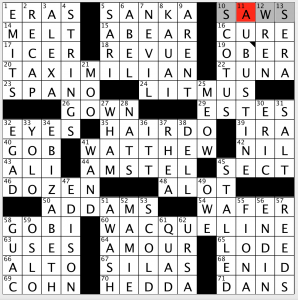 Remember when you were a kid and your mother called you by your full name? That seems to be the inspiration for the Jonesin’ today! Only we have, not names, but three and four letter words that are lengthened in a similar way that the names are.

I hope that made sense. Took me a minute to understand what was going on. It is unique, but perhaps it doesn’t make sense at first, and that isn’t ideal. But still a clever idea, and perhaps the confusion was just me. 4.2 stars.

See you this weekend for more blog posts. 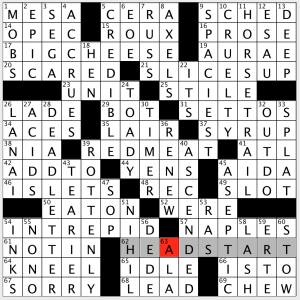 This is a byline I am not as familiar with. Still a good puzzle! Hopefully this puzzle wasn’t the start of a headache!

That is all. Have a great week!