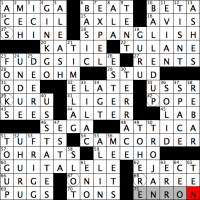 hello and welcome to episode #533 of matt gaffney’s weekly crossword contest, “Lost and Found”. for this week 3 puzzle, matt challenges us to name a five-letter noun. what are the theme answers? the five long acrosses, plus the shorter central across, are all portmanteaux:

so that’s “lost”. what about “found”? ah, there’s the beautiful part of the puzzle: there are five other theme answers sprinkled throughout the grid—each one an anagram of the “lost” letters from one of the portmanteaux:

ordering these by the corresponding portmanteaux and reading off the first letters gives SPORK, a hilariously apt answer to the puzzle.

i’m not usually one for “who wore it better?”, but this puzzle will unavoidably draw comparisons to patrick berry’s portmanteau wsj meta from last month. that puzzle was the rarest of collector’s items: a patrick berry puzzle i did not care for. matt’s had a much cleaner mechanism and an infinitely more satisfactory final answer. and the title could not have been more perfect to suggest both halves of the key insight. and the difficulty felt just right for a week 3 of 5, so this one gets 5 stars from me.

my only comment/question about the fill has to do with {With 23-Down, Chinese restaurant sought in the song “Werewolves of London”} LEE-HO/FOOKS. how the heck did both halves of this crazy answer get into the fill? i’m guessing FOOKS was somewhat forced by the F of FUDGSICLE and the K of KURU (and the fact that you can’t put FORKS there if you want SPORK to be the final meta answer). then once you’ve already got FOOKS, might as well go for the whole shebang, right?

that’s all i’ve got this week. what’d you think?