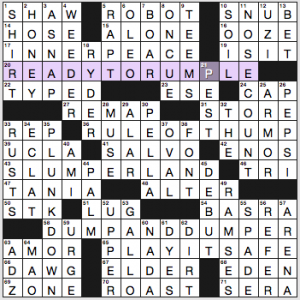 The theme takes phrases that contain the letter string UMB and makes them UMP, cluing the resulting made-up phrase:

Better than a B-to-P letter-change theme with variable vowels, but there’s not any particular rationale for the wordplay. No revealer or title to explain that. I wonder if the constructor envisioned 17a INNER PEACE and 65a PLAY IT SAFE as quasi-thematic? “Inner P’s,” baseball umps giving a “safe” call on a play? Probably not, given that the fill crossing the 10/13 stacked entries is not grievous, and it likely would be if those 10s were chosen to be thematic.

3.5 stars from me. Bits like STK and ADZ tugged the rating down.

He brings us a chuckle-worthy theme featuring phrases that started out with an apostrophe-S, but undergo an apostrophectomy while having the S transplanted to the following word. I’ve seen themes which do the opposite of this, but I don’t recall one doing this before. Oh, and furthermore, spellings and meanings are changed as needed. 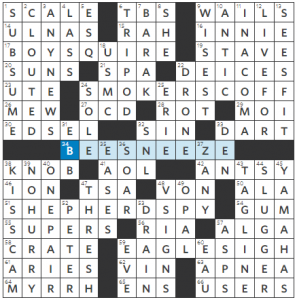 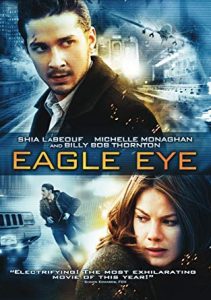 Wow! For a fun theme, this sure brought up a lot of hot-button issues! Still, I really enjoyed the wordplay.

I thought the grid was off to a rough start when 1a‘s [Many a Julliard student’s warm-up] had me filling in crosswordesey ETUDE right off the bat. I was glad to have to change it to SCALE later on.

And I’m not sure I’ve ever seen CLOUTED [Hit hard] before without the ear being involved. So would a [Smacked big cat?] be a CLOUTED LEOPARD?

There isn’t a whole of dreck here, a RIA, an ALGA, a UTE, etc. but nothing too bad. However, there are stacks of fun fill in the corners. I like the lively “ANY NEWS?’ and “NO HURRY” along with KISS CAM, TAGLINE, SLUGGER, and YAMAHAS.

I thought this was a thoroughly fun debut despite a few issues here and there. 3.7 stars from me.

If you’re like me, IN A COMA at 11d made you think of a certain girlfriend. Top comment from the following video on Youtube: “What if a transparent Morrissey was singing over all our lives and we just didn’t know it?” Something to think about in this day and age where “truth isn’t truth.” Here are The Smiths: 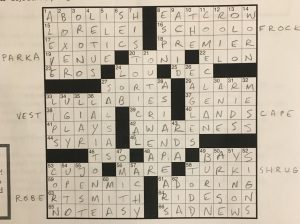 This week’s AVX puzzle from Anna Gundlach was released a little early at Lollapuzzoola 11, so I got the chance to solve it on paper on the bus back to Boston.  That means I wasn’t timing myself (or in best form to do so), but it did mean I got to savor what turned out to be a really lovely puzzle.

Anna’s a guest constructor for the AV, but I’m familiar with her work from the Queer Qrosswords Qompilation that ran earlier this year.  That was lovely, and the theme from this one is equally as lovely – you’ll want to take a look at the full-sized screenshot to catch my notes in the margins.  To review what’s going on there:

The AVCX has featured clothing-themed puzzles before, but I don’t really care about whether something’s been done before when it’s executed this well.  Around the time I hit ROBERT SMITH in the grid on my first pass through the across clues and realized what was going on, I had a great AHA moment with this.  Figuring out that PARKA was the last bit of OUTERWEAR (21D) to turn VENUE into PARK AVENUE was the last bit of solving I needed to do to call this one done. 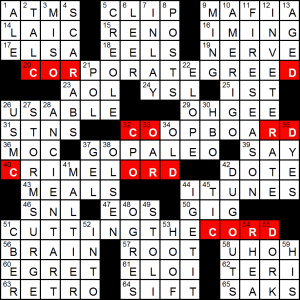 CUTTINGTHECORD is a lively revealer to an otherwise run of the mill theme type. I’d have preferred a medical angle on that clue, but in the U.S. this phrase as clues seems to be very au courant. The entries hide CORD bookended 3 ways. CORPORATEGREED googles a lot better than I thought it would; I’m not entirely sure if COOPBOARD is “coop” as in chicken coop or co-op – not a term I’m familiar with. CRIMELORD is solid enough.