The Fireball puzzle is still on summer vacation.

I managed to figure out what the revealer would be before I came across it, but it still took some time for me to see it. We’re given phrases that end in the trigram -LOW, and it’s at that point in each entry where it turns upward. What does it mean? The revealer is LOW RISES (57a, [Short buildings, and a clue to this puzzle’s theme]). Cute. 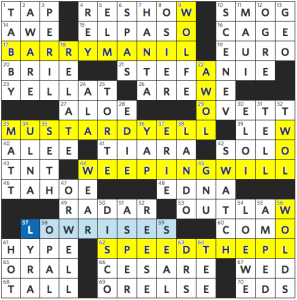 What did you think of the theme? Not bad, but that TWOL is rough, and WOLDS is an uncommon word to hinge (haha) your theme on.

Quite an array of cultural references in the clues today in addition to Manilow, Monet, and Mamet in the theme entries. Maybe this felt like a trivia contest for some:

Wow, that’s a lot of culture, pop and otherwise (and only one is very current: LANDO). Is it more than usual? Feels like it. Is it too much trivia? Maybe. I felt crossings were fair enough to help out in (most of) the tough sections.

There’s a lot of theme material, and with it curving upwards, there are quite a few constraints on the grid. That leaves precious little room for long non-theme fill. STEFANIE is about all there is. I do like the word SWATCH for some reason. Oh yeah, there used to be a watch with that name. Hey, it’s still around. I guess there are still some people who wear watches.

Ok, time to wrap this up. I like the theme, but it led to some rough fill (I haven’t really mentioned OVETT and OSIER yet) and the cluing felt a bit heavy on the trivia side. 3.25 stars. 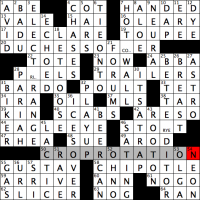 joon here filling in for andy, who’s on a plane. kyle dolan has a tricky rebus puzzle today with a theme of {Common farming technique … or a hint to solving this puzzle} CROP ROTATION. what does that mean? three rebus squares contain names of crops, and the across and down answers meeting at each one take 90° turns:

i was definitely a little slow to catch onto the theme—i could tell it was going to be a rebus, or something like a rebus, pretty early on when ELECTRIC EELS wouldn’t fit at 3d. but the first rebus square i fully grokked was HOT CORNER, and i was addled by the fact that there was an actual corner turn involved, so i wasn’t quite ready for the CROP ROTATION revealer until i worked my way down to the bottom of the grid.

i’m of two minds about the theme. on the one hand, i like seeing something new and different, especially when it comes to rebus themes, and i thought the six actual theme answers were all good to great (BETTER YET being my favorite). on the other, i can’t help feeling that the connection between “rotation” and what’s happening in these three special squares is a little more tenuous than i’d prefer. i don’t know if i’m articulating this well, but to me, a rotation would involve both of the answers turning (say) clockwise, rather than one clockwise and one counterclockwise, as is the case here. maybe this is a ridiculously nitpicky criticism that would only make sense to another physicist; i dunno. or maybe i’m just looking for somebody to blame for the fact that i was so slow to pick up on the theme mechanic.

the rest of the puzzle is all really good. i like that kyle didn’t bite off more than he could chew—having “only” three rebus squares felt just right to me as far as allowing for a lively, cleanly filled grid. there’s a lot of really nice medium-length fill: BEER CAN, IT’S A TRAP, LET LOOSE, EAGLE EYE, and CHIPOTLE to name a few. there’s a newish entry that i thought was a noteworthy inclusion: {“Lincoln in the ___” (2017 George Saunders best-selling novel)} BARDO. BARDO is an unusual word from tibetan buddhist belief, but this is a significant novel from last year, winning the 2017 booker prize. have any of you read it? i haven’t, but it looks really cool.

speaking of newish entries, {“O ___” (greeting on many lolcat memes)} HAI is a fun one. i mean, HAI is not new, but this clue is new. i’m actually a little surprised i haven’t seen O HAI in full yet. four letters, three vowels—that’s gold. (OH HAI is almost as common in memes, but of course, it’s also less useful as fill.)

i met kyle in person once, i think, at the 2017 acpt. i can’t remember all the details of our conversation, but i am pretty sure we discussed constructing; this is actually his first nyt puzzle since then, and even though it was 17 months ago, i’m wondering if it was already in the pipeline by that time. rebus puzzles have a tendency to spend a long time in the cellar before publication, because you can’t really have a rebus every thursday without them getting stale. kyle, if you’re reading this: do you remember when you sent this puzzle in?

that’s all i’ve got this week. thanks for a fun puzzle, kyle! 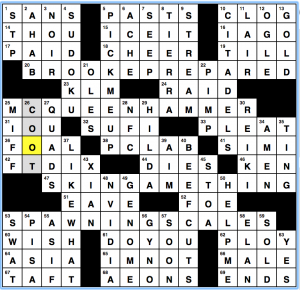 Each of these entries has a chess piece hidden inside an otherwise normal phrase (BE PREPARED, MC HAMMER, SAME THING, SING SCALES).  That last one kind of trips my “that’s not actually a thing, really” trigger, but I’ll let it slide. 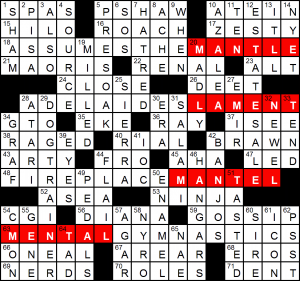 I like this find. A set of four six-letter anagrams are presented, and everything is tied up by a fabulous spanning revealer: MENTALGYMNASTICS. I personally have never heard of a FIREPLACEMANTEL, I call that a mantelpiece, but it googles remarkably well, so who am I to say.