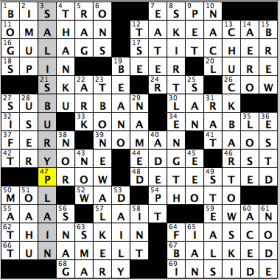 Good day, everybody! I hope you’re all doing well and enjoying these final days of August! Today’s crossword puzzle has a lot of meat on it…really, it does! In each of the longest theme entries, all going down, the first word of the two-word entries is also a word used to describe a type of steak. OK, this has made me hungry, even though I’m not the biggest fan of the first type of “steak” that’s in the grid, at least going from left to right.

If you’re looking for a cold one to go with all the steaks, this grid has the suds available for you with both BEER (19A: [Tavern order]) and BREW (15D: [Make coffee]). OK, I know “brew” is a little bit of a stretch, given its context in the clue, but maybe KONA is more down your alley when it comes to coffee (33A: [Coffee from Hawaii]). Though I don’t really need to brush up on my Alanis Morissette too much, I initially put in “thanks” instead of THANK U, a product of not reading the clue and assuming that the former had to be the answer (4D: [1998 Alanis Morissette hit]). Easily correctible, but still slowed me a bit. Some love for Indiana State in the grid with ISU, as, normally, the school in Ames, Iowa (Iowa State Univ.) would be the school associated with that entry (32A: [Terre Haute sch.]). Oh, there’s more Hoosier State love, of sorts, with GARY (68A: [Sinise’s favorite Indiana city?]). Probably my favorite entry in the grid was THIN SKIN, something I am not because I am too busy being self-deprecating about 90 percent of the time (62A: [Trait of an insecure, intolerant person]).

For the next two weeks, starting yesterday (Monday), I’ll be in Queens for the last tennis Grand Slam of the year, the U.S. Open, which you can catch on ESPN (7A: [“NFL Live” channel]). Speaking of the network, one person who became a college football legend while working at the channel is our subject of the next graph…

“Sports will make you smarter” moment of the day: BEANO (35A: [Game of chance]) – While growing up as an impressionable sports nerd, I was always mesmerized every time I got to see BEANO Cook, the late ESPN college football commentator and historian, on television dropping historical knowledge like raindrops. After stints in television in New York and Pittsburgh, Cook joined ESPN as a college football commentator in 1986, and is best known for his work at the “Worldwide Leader in Sports.” Cook passed away in 2012.

Thank you so much for your time once again! Have a great rest of your Tuesday and, as always, keep solving!! 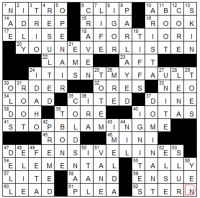 Last week’s Tuesday WSJ puzzle was somewhat similar in that each of the theme entries is a common response or ending to the same prompt. What made me like this puzzle much more than last week’s was that this one had a relevant revealer to tie it all together and give a reason for the theme entries. If it’d just been four argument deflections, I’d have enjoyed the puzzle much less.

I really appreciated that the fill was super clean, aside from maybe the partial AAND and the tough-for-a-Tuesday A FORTIORI. [Scanty skirt] for MINI felt judgmental, but that’s just my take.

#includemorewomen: Which women do we have represented in the puzzle today? [Beethoven dedicatee] ELISE, [Ferdinand’s shoe-loving first lady] IMELDA Marcos, LENA [Headey of “Game of Thrones”], 1/3 of [The Band Perry], and an interesting cluing of D’OH via daughter Lisa Simpson.

Most important to me, though, is who wrote the puzzle – a byline by two women made my day and made me all that more excited to dive into the solve. Interestingly, though I can’t find any trace of either author via Google, xwordinfo.com or this site, aside from reference to one attorney and one fictional character, so I’m a tad worried that they’re aliases. My fingers are crossed that this is a debut puzzle instead – does anyone have any info on either author? I’d love for it to actually be two women with a debut puzzle that we can celebrate! (If it turns out to be one or more male constructors using female pseudonyms, I’ll be substantially less thrilled though curious as to why they felt the need to use female pseudonyms.) Either way, I’d love to get to the bottom of this – help me out, Fiend friends! 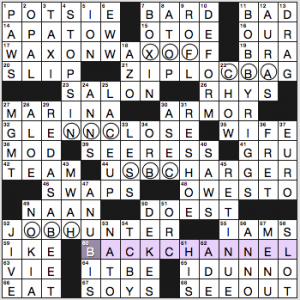 BACK CHANNEL is the revealer, clued as 60a. [Covert means of communication … or what’s hiding in the circled letters?]. The other five themers are familiar(ish) phrases with 3-letter TV channels spelled backwards in the circled squares.

The theme works for me, and I like the grab bag of theme entries. The fill seemed mighty rough for a Tuesday puzzle, though. Starting with POTSIE and progressing through OTOE, RHYS, weird plural SOYS, AZO, DEKES, ORB/ORC, and RESHOE (do people generally all know what a farrier does?). Remember when three solid themers and a revealer were deemed good enough? The fill would likely be better with fewer theme squares in the grid.

Matt Jones’s Jonesin’ Crossword, “Can I Get Your Digit?” – Derek’s write-up 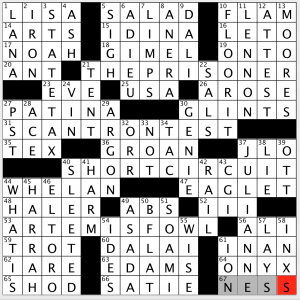 I often imagine how the brainstorming process goes in making puzzles. For this one, I immediately thought of how many things are referred to as “Number __”. Matt uses a few of them for the thematic clues:

Can you think of any more? I think there was a Number One on the Get Smart TV show, and there was a movie I am Number Four, but neither of those necessarily lead as smoothly to a grid entry like Matt did it here. Curious as to what was on the “cutting room floor” for this one! A solid 4.3 stars today. 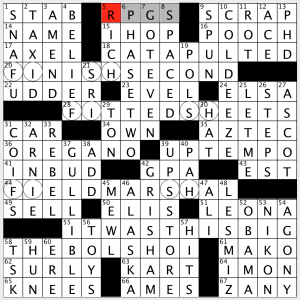 It seems as if there are a lot of bylines in recent weeks that I have never heard of. Joe Deeney is another one. Totally new name to me, but, as is pretty much always the case with these strangers, the puzzle is very good. Ever been fishing? Then you can relate to this theme!

Fishing is known for the tall tales told among its practitioners. The only other activity I can think of that is known among amateurs for excuses is bowling! “I need new shoes!” “I need my ball redrilled!” “The lane is too dry!” “A pin was out of place!” I can go on and on. And I have used many of these. I like how this “fish” gets bigger throughout the puzzle. Very clever! 4.4 stars from me.