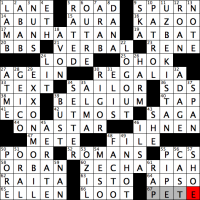 hello and welcome to episode #534 of matt gaffney’s weekly crossword contest, “Quartet Quest”. for this week 4 puzzle, matt challenges us to name a familiar quartet. what are the theme answers? well, there are four long answers in the grid, each with a parenthetical number to give us an ordering:

in addition, there are a few other parenthetical hints in some of the clues:

okay, first things first. the theme clues are clearly specifying a tv show, country, book of the bible, and company. the clue for AVON explicitly points out that matt is not talking about AVON the company. this strongly suggests that we should be looking for extra fill in the grid that *is* clued to the company (and tv show, book of the bible, and country). and here they are:

okay, that was the easy part. what next? we haven’t made any use of that hint in the SPAN clue, nor of the anagramming suggested in the MIX clue. and i’m very glad i looked at that hint, because basically nothing else about the puzzle suggested the next step: look for yet another tv show, country, book of the bible, and company that anagram to grid entries. this was by no means easy—there are 60ish books of the bible, 200ish countries, and many thousands of tv shows and companies… more than enough to pose a problem, as we’ll see. but here we go.

i found the book of the bible first: CAST anagrams to ACTS. then i used the hint from the SPAN clue to find the crossing APSO, an anagram of SOAP (not the most familiar tv show to anybody under 40, i have to say, although i have used it as a theme answer before). the country took longer—it’s ALGERIA, an anagram of REGALIA in the grid. the company took a *lot* longer—in fact, i backsolved it, but the one i first found isn’t the only one, and i’m actually curious how many there are.

so, what do i mean by backsolved? well, i started looking at the answers i’d assembled. i’d found three tv shows, three countries, three books of the bible, and two companies:

look at the first letters of those. UBA in the countries and ZRA in the books of the bible caught my eye, because they can be prefixed to make four-letter entries that also fit those categories: CUBA and EZRA. so we’re getting the letters C and E for the country and book of the bible, respectively. i already then guessed that the meta answer might be the four aces, based on _CE_, because there aren’t that many things fitting that pattern that could lead to a familiar quartet.

if so, the company would have to give us the letter S; the SEG_ company would then clearly be SEGA, which means that the missing anagram is an anagram of a company starting with A. that gave me the nudge i needed to find RAITA, which anagrams to ATARI. (it certainly helped that SEGA and ATARI are both video game companies, so i was already thinking in the right subspace of the category.) later i was talking to andy kravis about this puzzle and he mentioned that he had found LODE <-> DOLE, certainly also a major american company. there’s also NOTE <-> ETON; it’s not how ETON is ever clued in a crossword puzzle, but that is undeniably a company. it feels like there must be many more, perhaps arbitrarily many more.

(while we’re here, andy also pointed out that the PORE/ORBAN crossing was necessary because PURE/URBAN, while objectively better fill, has the problem that PURE anagrams to PERU, which wasn’t part of the meta. none of this is to say that hungarian pm viktor orban is somebody you shouldn’t be aware and terrified of, but certainly he is less famous than the word URBAN.)

leaving all that aside for now, what does this mean for the tv show? with MANHATTAN, ELLEN, and SOAP, we need for there to be a tv show called AMES to get the A for ACES. and … there isn’t. there’s a 1950s singing group called the ames brothers, and they had a short-lived tv show called the ames brothers show. but that just doesn’t fit the pattern.

on the other hand, we have _CES already, by a clear and unambiguous mechanism; the order is set in stone, and CUBA, EZRA, and SEGA are evident. and the letter that fills in the blank to make a familiar quartet also has to be the same letter that fills in _MES to make a tv show. there just isn’t anything it could be other than A, so the four aces has to be the meta answer.

i don’t know exactly what to say about this meta. parts of the mechanism are ingenious, but the part where we were supposed to somehow just know to anagram random fill entries into things that fit into defined categories was fairly absurd without the hint. i don’t see why anybody would think to do that. even with the hint, it would have been a bit much to find APSO/SOAP without an additional hint. there are just so many tv shows, many of which i’ve never heard of (including, i feel i should say, MANHATTAN). and yet AMES just isn’t one of them. so unless i’m missing something, the meta is fatally flawed.

well, that’s what i’ve got. if there’s something i missed that makes it all hang together somehow, please do let me know in the comments. thanks!