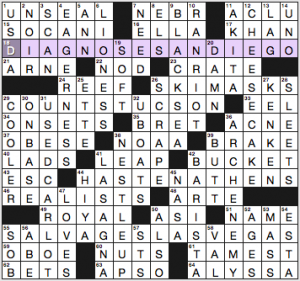 The theme anagrams city names into verbs and creates goofy phrases that are clued accordingly:

The theme feels uneven to me, as three of the cities are in the American Southwest, among the 35 largest cities in the country. And then there’s ATHENS, which is either the capital of Greece or a Georgia city that is much smaller than these other three. I guess there aren’t a ton of cities whose names can be anagrammed into verbs, but still.

The grid is 16 squares wide to accommodate the 8×2 themers.

I would like to channel my grandmother and chide this puzzle. “Such language!” DAMN, BUTT!

Not much else to chat about here. 3.4 stars from me.

After his WSJ debut just one week ago, Jim Q. is back. This one’s also quite fun and re-imagines various verbal statements which contain two-letter words that are equivalent to certain states’ two-letter abbreviations. 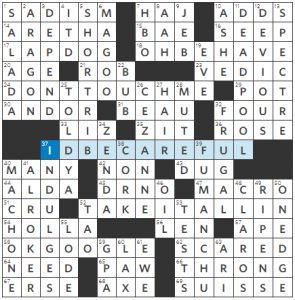 Fun theme, I knew three of the states off the bat, but it still was some work to figure out exactly what was going on and where the state abbreviations would land. Also, I never heard “OK, GOOGLE” before, but I guess that’s the equivalent of “Hey Siri” and…what? “Alexa”? Is that how you get Alexa’s attention?

I’m a sucker for a theme that takes existing phrases and re-jiggers them into something else, so I enjoyed this quite a bit.

And there’s a lot to like beyond the theme. SADISM is a bold start at 1a (clued as [Practice with whips?]). There’s also DEADPOOL, SHORT RIB, CEZANNE, FU MANCHU, and INDULGES. That’s a beautiful set of long fill. Also good: ZENDA, DEVIOUS, SPECTRE, MACH ONE, AL ROKER, “TOLD YA!,” LAP DOG, ARAGON, and of course, ARETHA. 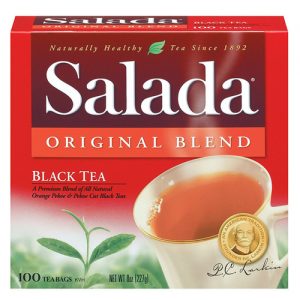 In the “not in my wheelhouse” category, we have: VEDIC [Form of Sanskrit] and SALADA [Lipton alternative]. I don’t think I’ve ever seen that brand of teas in stores. While I would categorize these as really uncommon bits of fill, I don’t mind, as long as they’re edifying and they’re not pervasive throughout the grid. And of course, the crosses have to be fair, which they are today.

A fun theme and lovely grid with outstanding fill. 4 stars from me. 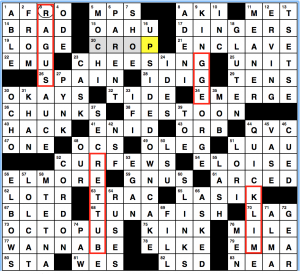 It’s Wednesday!  We’ve made it midway through the week.  The .PUZ version of this week’s AVCX was missing the shading of the PDF version (or it’s just the solving tool I used not picking the circles up), so I’ve highlighted the entries in red over in the screenshot.

Aimee Lucido’s “Raising Dough” is a 2/5 on the difficulty scale which was made a little trickier by the lack of circles for me.  It’s a vertical theme, which is a fun twist on the usual expected structure for this sort of thing:

I’m a little underwhelmed by this theme.  I would’ve liked to have seen FLOUR somewhere in the grid (probably not as a theme clue – RUOLF is a tricky patch of letters to hide), since MILK, BUTTER, EGG, and SUGAR will get you something that’s definitely GLUTEN-free but doesn’t quite qualify as a cake.  In addition, RAGU SAUCE is redundant (RAGU is a sauce genre) and SECRET TUBE feels oddly greenpaint-y, even if it is an actual thing.

Here are the pants described in the clue for 27D’s “PYNK” (which is, as the kids these days say, a “bop”) 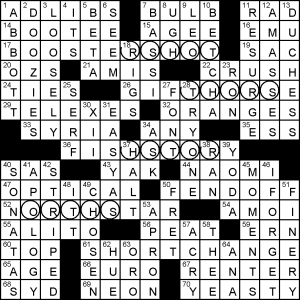 I am not feeling at all good. I will explain the theme at least. SHORTCHANGE is using CHANGE as an “anagram indicator” and the letters in short can be found in other theme answers rearranged across both parts. So: BOOSTE(RSHOT), GI(FTHORS)E, FIS(HSTOR)Y, and N(ORTHS)TAR.