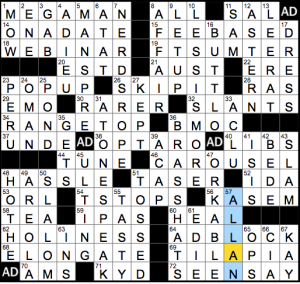 A quick review this week!

It’s a secret rebus puzzle! 64a tells us the theme is AD BLOCK [Popular browser extension … or a literal description of four black squares in this puzzle]. Black squares are sometimes called “blocks” in the biz, and here four of those blocks contain the rebus AD. Like so:

Lots of theme entries, and I thought they were all really well chosen and fresh. You know me: I love a rebus puzzle. This was no exception: the aha moment was a lot of fun, and I thought the revealer was great.

Lots of other fun fill: MEGA MAN, HOLINESS, WEBINAR, FT. SUMTER, FEE-BASED, LESS IS MORE, SEE ‘N’ SAY, TILAPIA, NERDS ROPE!. Had trouble parsing RANGE TOP, especially with the killer clue [Place for pilots], and almost flubbed the crossing with AT ONE’S PEAK because I really wanted that entry to end with “speak”. A little bit of grungy fill throughout, but for me the tradeoffs were minimal and totally worth it.

We’ve had quite a few debuts lately in the WSJ, and here’s another one. Daniel Schmit appears to be making not just a WSJ debut, but a cruciverbial debut, alongside veteran Mary Lou Guizzo.

Today, they’ve cooked up a filling theme to satisfy your Thursday craving. Each of the four long Down entries is actually going in the Up direction, and each is an item that you fill with something else. 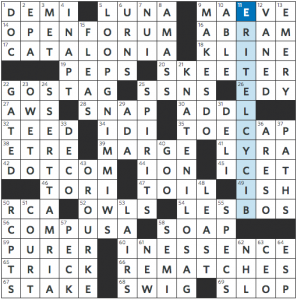 This was fun to suss out especially because of that LOOP- situation I mentioned. I basically uncovered the entries left-to-right, so as I was solving them, I was also determining what was the filling element. First was air, then water, then gas, then…air again. That was a little bit of a letdown. It would have been a touch more elegant if each item was filled with a different thing. How about a BEAN BURRITO?

I’m loving that upper left corner with OPEN FORUM stacked atop CATALONIA. The lower right counterpart of IN ESSENCE on REMATCHES isn’t as showy, but it certainly works. Other goodies: COMPUSA, SKEETER, GO STAG, MAKES DO, SPIRITS, DOTCOM, and the Greek isle of LESBOS which has been in the news recently for painfully sad reasons.

O’ROURKE was tough with that clue [Ted Cruz’s 2018 Democratic challenger Beto]. I have not followed this race, but it will be worth watching from here on out.

I loved seeing Kevin KLINE at 18a (especially since I remembered to spell it correctly and not KLEIN) given that clue [“A Fish Called Wanda” Oscar winner]. One of the funniest movies I have ever seen. Constructors! His character was named Otto, so…have at it.

Clues were Thursday tough, which means possibly bordering on the edge of trivia, but crossings seemed mostly fair to me. MAEVE [Thandie Newton’s “Westworld” role] crossing VANED [Like windmills] at the V was a little sticky for me. And DEMI [Patrick’s “Ghost” co-star] crossing the trickily clued DOC [Happy co-worker] might have caught some people. If you didn’t know that DEMI Moore was in Ghost and that the second clue was talking about dwarfs, I can see where you’d have some trouble. 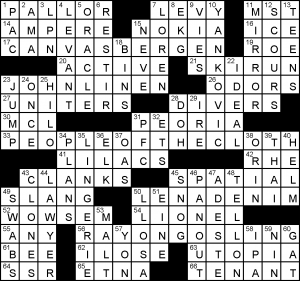 Can’t say I enjoyed this puzzle much. Although gender-inclusive language is nice, PEOPLEOFTHECLOTH in quotes has 825 hits on Google. It’s not in use. The puzzle itself takes arbitrary famous people and changes one part of their to be a type of fabric: (CANVAS) CANDICE BERGEN, JOHN (LINEN) LENNON, LENA (DENIM) DUNHAM and (RAYON) RYAN GOSLING.

The rest of the puzzle, although we did get Weird Al Yankovic, had some real clunkers. UNITERS/RESTIR – crossing fake words! WOWSEM is also just a made-up roll your own bit. ORIN is a dentist, but given the difficult abbr. crossing it we got an easy, if plug-ugly partial clue.

Some less than obvious abbrs. RHE is apparently “Runs Hits Errors” though the clue is rather vague. I initially thought it must be a team like ATL or CLE. I know AMA is Ask Me Anything, but if you haven’t been on reddit, the letters will be meaningless.