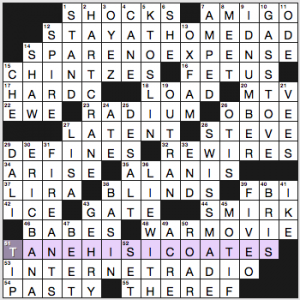 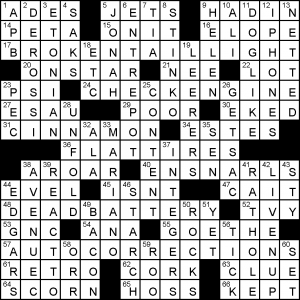 Cute theme, although the revealer is a tad strained: AUTOCORRECTIONS rather than more typical AUTOCORRECT. The rest of the the theme is common car complaints: BROKENTAILLIGHT, FLATTIRES and DEADBATTERY. CHECKENGINE is a bit of an odd one out, as it’s not a thing that’s wrong, but rather a sign. My Lizzie (2005 Fiat Panda) spent over a month at the mechanic waiting for a new hub (from Japan?!) so… flashbacks.

Things I learnt: [“Appropriate for all children” rating], TVY is a thing, wanted TVA. [Portia of “Arrested Development”], DEROSSI was in roles after Ally MacBeal other than Better Off Ted. [Legendary Yankees closer, familiarly], MARIANO – have no idea, though several other Fiend bloggers follow baseball, and particularly the Yankees; Google suggests Rivera – I assumed we were looking for a nickname.

This entry was posted in Daily Puzzles and tagged Peter Wentz, Ross Trudeau. Bookmark the permalink.