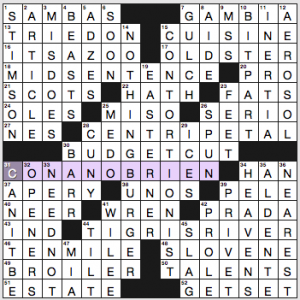 This 66-worder has a nice center with 9s, 11s, and 13s intersecting, but also a couple 11s that spin out into corners with lots of crossing 7s, and I’m less fond of the latter. Interrupting MID-SENTENCE, BUDGET CUT, CONAN O’BRIEN, the TIGRIS RIVER, a NOTHINGBURGER, and a CONTORTIONIST are zippy.

World watch: We’ve got the GAMBIA, the SCOTS language (21a. [Language with a trilled “r”]), Japanese MISO, HAN Chinese, Brazilian PELE, Italian PRADA, the TIGRIS, and a SLOVENE.

Could’ve done without: sort of contrived IT’S A ZOO, plural OLES, prefix SERIO, APERY, TALENTS clued as [Money in the Bible], MISDOES, dated NES, partials ME DO and WILE E.

Did not know 1d. [Secretary of war to Taft, Roosevelt and Truman], STIMSON. Henry? Yes. 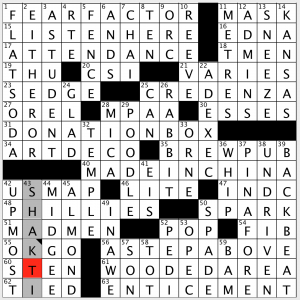 Greg Johnson made one of the recent Newsday Stumpers that gave me all kinds of fits. This one is mercifully much easier. Still a bit of a challenge, but done in under 10 minutes. I am sure some of you out there could jam through this in 5 or 6 minutes. A great, wide-open 70-word grid for this one, and I recently found Greg Johnson’s web site for more of his puzzles. (Click here for his site) I had one little error, and I will fully explain why below. 4.6 stars for this one. 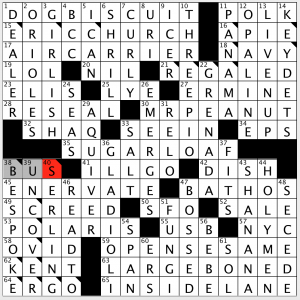 Not a bad time for me on a Brad Wilber puzzle! Maybe I am getting better at these! Or maybe Stan has eased it up a smidge for the holiday weekend! We all need time to solve Mark Halpin’s Labor Intensive puzzles that are coming out this weekend! I am out of town this weekend, and if you watch my Facebook you may learn where I am! 4.5 stars today for this 70-worder.

This theme threw me for a few DO LOOPs before I sorted it out. Let’s look at the theme answers first. 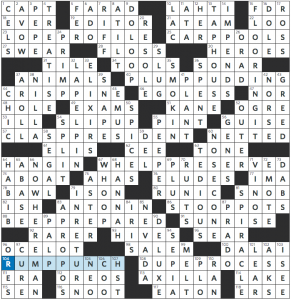 At first I thought this was just a P-doubling theme since the first two answers I uncovered were CARP POOLS and PLUMP PUDDING. Eventually I realized it’s not just adding a letter P, it’s adding the P sound to the end of the first word.

Most of the entries felt workmanlike and lacking in pizzazz, with the notable exception of RUMP PUNCH. Hmm, I wonder if the theme could be extended to add a T to the beginning of the phrase…

There were some goodies in the fill: NOWHERE MAN, TAPHOUSE, LAPEL PIN, ELIXIRS, NOSECONE, SUNRISE, APROPOS, NEVADA. FLOORING IT would be much stronger in the imperative and not as a gerund.

There were also some stand-out oddities: HANG IN [Persevere] which looks weird without a concluding “there,” HABIB [Reagan’s special envoy to the Mideast Philip], and especially ORAD [Toward the mouth]. Ouch. That’s the crosswordesiest bit of crosswordese I’ve seen in quite some time.

In the new-to-me department is SPIRACLE [Whale’s nostril]. The Wikipedia article doesn’t even mention whales though. It highlights some fish and insects.

Cluing felt more thorny than usual, so at times I felt like I was just slogging it out. But luckily for me, RUMP PUNCH was waiting for me at the end, so I finished on a high note. Overall, though, I’d put this in the 3.2-stars range.