Today’s WaPo is a reminder that I’m back to work in a few short days after an entire year off (I’m an English teacher… don’t judge my typos). I think I’ll open class by saying “And remember kids… Misreading is Fundamental!” 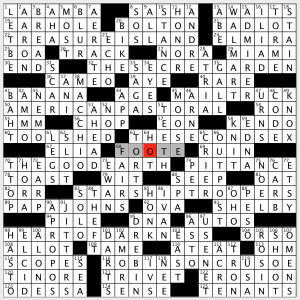 In a way, the theme felt similar to last week’s WaPo where everyday phrases were reimagined as company products. This time, we’re looking at well-known book titles that, when parsed differently, have zany new plots.

22A. [1883 novel about how riches and territory are the same thing?] TREASURE ISLAND. Parsed differently it becomes TREASURE IS LAND.

32A. [1911 children’s book about a hidden lair of needlefish?] THE SECRET GARDEN. That is to say GAR DEN. Gar being one of the more crosswordy fish out there. I saw quite a few on a fishing trip in the Louisiana bayou. U-G-L-Y.

50A. [1997 novel about a U.S. history grad student’s exam?] AMERICAN PASTORAL. PAST ORAL. I’ve never read it, though the name is familiar enough.

63A. [1949 book about a duel assistant’s former spouse?] THE SECOND SEX. I think I’m just reading this clue for the first time now. And it took me a while to see the new parsing. THE SECOND’S EX. I’ve never heard of this book, but it sounds very interesting.

70A. [1931 novel about a shortage of slime?] THE GOOD EARTH. My favorite of the bunch! GOO DEARTH is a fun find! I have to teach this book for the first time this year. Haven’t read it since high school, though Olan and Wang Lung are very much in my crossword vocabulary.

83D. [1959 novel about the cool state police officers employed by a celebrity?] STARSHIP TROOPERS. Of course I meant to say STAR’S HIP TROOPERS. Had no idea the movie was based on a novel. I’m not familiar with either- though the title is definitely well-known.

98A. [1902 novella about the essence belonging to Untouchable Eliot’s evil counterpart?] HEART OF DARKNESS. I wonder if DARK NESS was ever under investigation for wrongdoing. That would be ironic.

116A. [1719 novel about songbirds perched atop a castaway?] ROBINSON CRUSOE. A simple, but hilarious parsing: ROBINS ON CRUSOE.

The grid put up very little fight for me and I completed north to south with virtually no hangups. Under 10 minutes for any 21×21 grid is fast for me- I can’t be sure, but at 9:53 I think this was a personal record. Still learned a couple things along the way though!

45D. [Herbivore with hooves] MOOSE. Had no idea Bullwinkle was a vegetarian. Feels like I should know that.

43D. [Captain whose name is Latin for “nobody”] Fun way to clue NEMO. Was unfamiliar with the Latin translation.

95D. [Frank ___ (Leslie Nielsen’s role in “The Naked Gun” films)] DREBIN. This question just came up in pub trivia less than a week ago. I didn’t know it then, and I’m ashamed to say I didn’t know it now. Hopefully it’ll stick! 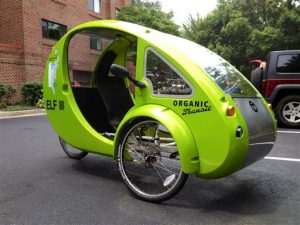 If you type BICYCLE VEHICLE into Google Images, a bunch of these pop up! Kinda looks like a Smart car…

20D. [Vehicle shared in a big city, at times]. I entered UBER, then TAXI, then… BIKE? I assume this is referencing the increasingly common bike-sharing programs, but as an avid cyclist myself, I am having a tough time equating a bicycle to a vehicle. I’m sure it’s technically correct, but still…

23D. [It precedes Foxtrot in the NATO alphabet] ECHO. If you didn’t immediately enter ECHO, then chances are high that you didn’t solve Evan’s (fantastic) variety puzzle from a few weeks back.

20A. [“Soul Provider” singer Michael] BOLTON. I was forced to endure Michael Bolton for most of my childhood because my mom was a HUGE fan. And I hated him… for a long, long time… until this hilarious video came out a few years ago. Now I have a new respect for him. Slightly NSFW:

Overall, I enjoyed this one, despite being unfamiliar with some of the titles. 3.8 stars from me. 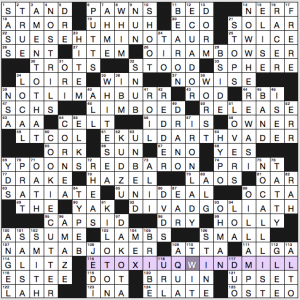 The theme is head-to-head conflicts, with the first of each pair being spelled backwards so that the word’s “head” is next to the “head” of the other word.

Neat theme set and concept. Not all of the fill rose to the same level (I’m looking at you, AH ME, SCHS, and friends.) COOKIE CUTTER, “NOW, WHERE WAS I?”, NO-CALL LIST, “AMEN TO THAT,” LIMBOED, and IRON LADY sparkled, though.

Hey! I just realized that this is a Labor Day theme! Not quite sure how I missed that. Hope you’re all enjoying the holiday weekend!

In six rows of today’s grid, there are two answers that, when separated by a block, form different vocations. Hence “Division of Labor.” Luckily, there are circled squares that tell the solver where to look. 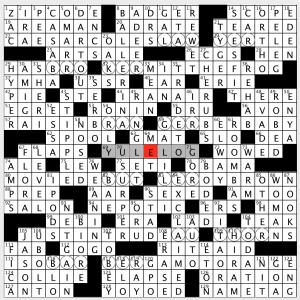 22A and 24A. [Picnic side with Parmesan dressing] / [Seuss’ turtle king] CAESAR COLESLAW / YERTLE. “Lawyer” is divided between the two answers.

57A and 59A. [Post production?] / [Logo modeled for five-month-old Ann Turner Cook] RAISIN BRAN / GERBER BABY. My favorite of the combos for the playful clue / fun fact. Ranger.

105A and 109A. [Successor to Canada’s Stephen Harper] / [Bike trail hazards] JUSTIN TRUDEAU / THORNS. Only set that isn’t divided equally. 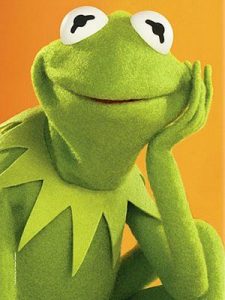 It doesn’t look THAT tough to be green!

Some of the theme answers were extremely easy and required no crossings at all. I mean, “Bein’ Green” iconically belongs to KERMIT THE FROG, Jim Croce is almost synonymous with LEROY BROWN, Canada almost immediately evokes JUSTIN TRUDEAU these days, and [Monopoly maker] for HASBRO is a standard crossword clue/answer pair.

Others played on the other end of the spectrum. And as CAESAR COLESLAW was the first theme answer I tried to fill, I was a bit nervous that the whole puzzle would play too difficult. But that’s because CAESAR COLESLAW is… not really a thing. Google returns only 12,000 hits when searched in quotations (compared with 15 million for “Caesar Salad”). Sure- it sounds delicious- but even recipes declare it unique. I think I’ll try to make some tonight. 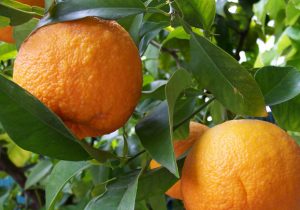 BERGAMOT ORANGE is another that’s entirely new to me. After working in restaurants for the past 20 years, it seems like I go out of my way to stay ignorant of all things food. I can hardly cook pasta. Needed every single cross on BERGAMOT.

THORNS ate at me a bit too- simply because I don’t consider them a bike trail hazard. There are so many things that are hazardous on a bike trail- roots and rocks being tied for first place. THORNS doesn’t even make the top ten for me. Tires are made to withstand them and legitimate “bike trails” are groomed enough that they shouldn’t be blocking the path. While you’re watching for THORNS, I’ll watch for bears.

99A and 100D. [Mazar of “Entourage”] crossing [Deep Pore Charcoal Cleanser brand]. DEBI / BIORE. That B is brutal. I’ve never heard of either, and while I’m now happy to know both, I would’ve had a DNF here (I ran the alphabet on my keyboard until Mr. Happy Pencil made an appearance).

Overall, the theme was fun to uncover. I just wish it were more consistent in its difficulty level. Oh well. I’ve got to go design some lesson plans for next week. Maybe I should do that with a cup of CHAI TEA, CHERUBS!

P.S. Here’s a text exchange with my boss/friend who is a gourmet chef… so it looks like I should pay attention more: 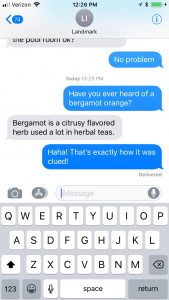 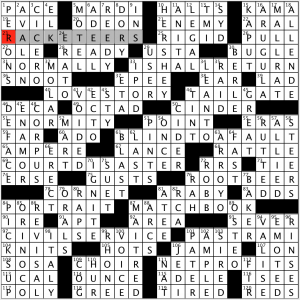 Tennis puns! I’d make a few more but I think this puzzle has them covered.

Plus a little bonus content: [29a: Org. hosting an Open]: USTA and [53a: “Your __ being?”]: POINT. This puzzle ran in the Boston Globe five weeks ago, just after the end of Wimbledon, and it has been released today as the CRooked during the US Open. Nice timing!