No WSJ puzzle due to the holiday. Happy Labor Day to those who celebrate.

We’ve got a name that isn’t in our tag library, so my bet is that this is a debut. <checks another crossword site> Why yes indeed! Welcome to CrossWorld, Trent! 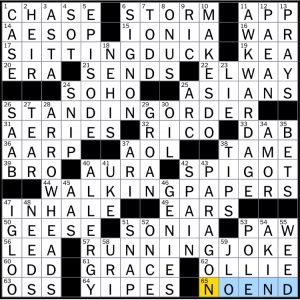 Theme has some get-up-and-go, in that the entries progress from SITTING to STANDING to WALKING to RUNNING. A very accessible and very Monday theme — if you have friends and family who are all, I could never solve a crossword puzzle!, this would be a good one to start them on.

Fill-wise, some freshness with AWKWARD AGE, clued in relation to middle school, the awkardest age of all, rather than the 1899 Henry James novel, PARAGON, which is a fave word o’ mine, eye-rhymes IONIA and SONIA, plus a bunch of AE ligatures what with AERIES and AESOP and PAEAN. I’m not convinced that URI Geller is well-known to anyone anymore, nor ASTA; both have gone the way of NEHIS (don’t get me wrong; I love me some Thin Man movies, but let’s acknowledge that cultural references change).

Department of YIPES! [42d: Eskimo home]: IGLOO. Let’s erase the word Eskimo from our grids and clue libraries; it is generally considered derogatory among First Nations peoples. If there’s something in your grid or clues that is potentially offensive or outdated, why not take the side of care and compassion? (That’s not a rhetorical question; I would really like to know why not? Does insensitivity save printing costs?) It should be mentioned, as well, that while the [28d: Images on Kansas City Chiefs’ helmets]: ARROWHEADS aren’t as racist and offensive as the name and associated mascotery of the Washington DC pro football team, they’re still an example of cultural appropriation. How about animals? Animals are cool; they make appropriate mascots; they have teeth and fur and make scary roaring noises and stuff. Let’s switch all the mascots and team names to animals, or to personifications of weather and other paranormal phenomena. 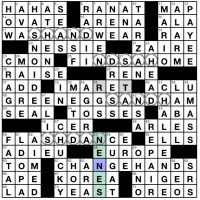 Overall, this was a pretty straightforward ‘scrambled word hidden among themers’ puzzle, but I appreciated that the theme entries were mostly fresh and interesting. There’s a small ding for the word AND being part of the HANDS anagram in two of the four circle theme entries, but I imagine that coming up with a lot of other interesting combinations to fit this puzzle would be a CHALLENGE.

I was thankful for my knowledge of geography when solving this puzzle. We have ZAIRE, EUROPE, KOREA, ATHENS, NIGER, and the seven SEAS all on the MAP!

Where things went wrong for me (and where 3D accurately described me: HAS NO IDEA) was the near double-Natick in the center of the grid at the end of my solve (see shaded squares). I had no clue about IMARET or SETAE … and aren’t LGS just as viable as RGS in terms of being [Some QB protectors]? I had to run the alphabet at the end of IMALE_ and then, when that didn’t work, run the alphabet at the end of IMARE_ to finish the puzzle. That’s pretty gnarly for a Monday.

#includemorewomen: One of the most joyful moments of my teaching career happened last year, when I got to see my students – and especially my female students of color – transform as they listened to AVA DuVernay speak about her life, her work, and her impact on Hollywood – all during a school assembly. So many of my students saw themselves reflected and represented in a way that made them feel seen, that made them feel that their goals were possible and right. AVA, thank you for bringing your mastery to the screen and to the young people you’ve inspired! 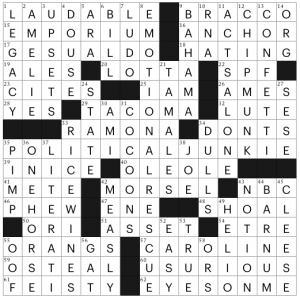 Liz Gorski is up for the New Yorker puzzle today. I love Liz’s puzzles, and I love hard puzzles, and…I did not totally love this puzzle. My solving time reflects the time spent running the alphabet in one square, plus the time it took to figure out which square it was. I didn’t resort to the “check” function or to Google, so I’ll take that as a moral victory.

My Waterloo (or Natick) was 17a crossing 7d. [Renaissance madrigal master who murdered his wife and her lover] is probably someone music-loving Liz knows all about. Wikipedia filled in the gaps for me about GESUALDO. Apparently the woman he murdered was his first wife. I’ll just leave that there.

The crossing, [Top chef LeFebvre, author of “Crave”] didn’t help me either. His name is LUDO. I started with LUCO and changed it to LUGO and then just put in letters until I found the right one. I made the NE more problematic than it needed to be by dropping in ESTATE for 1d, [It’s passed on by one who’s passed on]. The correct answer is LEGACY.

There is a lot of good stuff in this puzzle as well.

What I didn’t know before I did this puzzle: that John CLEESE voiced King Gristle, Sr, in “Trolls.”

I enjoy BEQ’s edginess, profanity, obscure music references and sidewise cluing. You don’t hear me grumbling about “puzzles these days.” I say that so you know the context when I tell you that this puzzle is awful. This goes beyond “edgy” into “contemptible.” You’ll find the solution grid below containing a terrible clue/answer pair. The use of [Teasing girls] as a clue for LOLITAS is beyond poor taste. It’s horrifyingly misogynist nudge-nudge-wink-wink at men who prey on young girls – and it blames the girls.

The logical conclusion of this disgusting train of thought is this story of a Montana judge who said that a 14-year-old girl was “as much in control of the situation” as the 54-year-old teacher who raped her.

I’d never heard about the case before. You know how I found it? I googled “Judge excuses rape of teenage girl” and I chose that link from the fifteen or twenty available.

Go ahead. Tell me you don’t come to this blog to hear me rant. Tell me feminism has no place in this discussion. Tell me about Nabokov’s literary gifts and his exquisite use of wordplay. Tell me that I’m taking the crossword too seriously and I should “lighten up.”

Or read the story I linked to and realize the girl in question killed herself.

This is not fun and games. This shit is deadly and has no place in a civilized society, let along in a crossword puzzle. 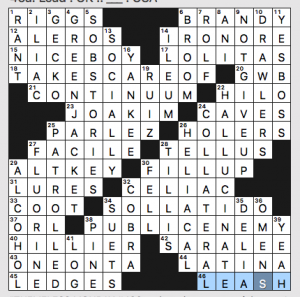