This week we’re looking for a “famous fictional character” — not a person, necessarily. We get a hint in the center: [35a: Location-describing term that’s a triple hint to the contest answer]: CATTY CORNER. That’s interesting, because the more common English usage is either kitty-corner, or sometimes cater-corner. And why is it a “triple hint”? Could we be looking for a cat? For a while I thought the answer might be GARFIELD — he’s a cat, he sits in the corner, sometimes, and he’s rather catty, particularly toward oblivious Jon and drooly Odie. 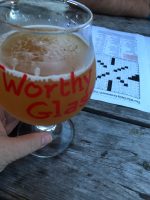 Could it be something to do with the corners of the grid? There are four canonical corners: the northwest, northeast, southeast, and southwest, plus this particular design makes many additional corners throughout the grid. My first extraction technique was to write down every letter that appeared in a corner, get frustrated and put the whole thing away for an entire day. My next approach was to go out with a friend to my favorite beer-and-burger bar in Vermont, Worthy Burger in South Royalton. While I was there, I sent a plea for hints to my solving group: 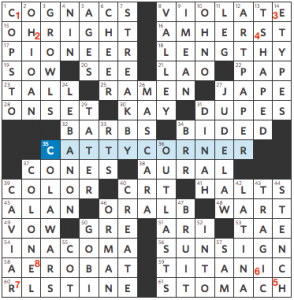 So starting from the corners is the right track, but, following Metasolving 101, I knew that the title had some bearing — oblique also means catty-corner. Could there be something leading obliquely from the C-H-E-R corners? Is there a famous fictional cat that has C-H-E-R in its name, in that order or otherwise? Why, yes indeed. If you proceed diagonally — that is, obliquely or catty-corner — two squares from each corner, following NW -> NE -> SE -> SW, you get C-H-E-S-H-I-R-E. Thence our “triple hint” — the answer proceeds from each corner, catty-corner, and it’s a cat. OH RIGHT! 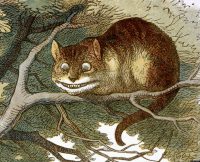 I don’t know that without trial and error that I would’ve come to the answer from anything embedded in the puzzle; how were we to know that we should proceed only two squares obliquely from the corners? Curiouser and curiouser. I’ve always considered the CHESHIRE CAT to be a personally iconic figure — it appears (both cat and grin) on my Learned League flag; I’ve shared my life with a series of tabby and/or American Shorthair cats who had similar physiognomy; and the next tattoo I’d like to get is of the original Tenniel illustration. I should think that the Cheshire Cat’s advice to Alice could apply to those of us who like to solve metapuzzles: