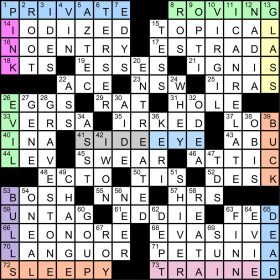 Crossword Nation puzzle solution, Week 379: “I Get Around”

Hello once again, crossword people! Here is hoping your Labor Day did not involve so much…umm…labor. Solving today’s puzzle was a labor of love, as an ingenious theme is combined with some great fill. As you could see in the embedded grid, each of the entries making up the perimeter of the grid are words that come before the word “eye” in phrases, with the wonderful reveal of SIDE EYE smack dab in the middle (41A: [Disapproving glance…and a hint to the theme hidden at this puzzle’s perimeter]).

From the time I started solving the Crossword Nation puzzles, this is the most fun I’ve had, especially when the reveal emerged and you look at the edges of the grid and marvel at the execution. None of those theme entries are stretches, and I know that I’ve probably used each of those phrases (with the word “eye”) at least once in my life. Then there’s the non-theme fill to chew on, and my personal favorite was GRAVESTONE – entry and clue (28D: [Mel Blanc has one that says “That’s all folks”]). It’s paralleling partner, I CAN RELATE, was another gem (11D: [“Been there, my friend”]). I’m the first to admit that one of my absolute weaknesses when solving puzzles – and a blind spot in general – is flowers/plant life/fauna, so I’m definitely going to look up as much about the PETUNIA as I can after this (71A: [Funnel-shaped flower]). I’ve used “languid” many, many times, but getting LANGOUR was more of a struggle than it should have been since my mind was always trying to say to me when I was solving for it that there should be an “I” in there (70A: [Sluggishness]). Alright, time to head out and get back to work, but I’ll leave you with this little baseball nugget…

“Sports will make you smarter” moment of the day: VIRGIL (10D: [“Aeneid” poet]) – As most of you may know, many players of Dominican descent have had an indelible impact in the game of Major League Baseball, but Ozzie VIRGIL, who played nine seasons in the majors between 1956 and 1969, was the first player born in the Dominican Republic to play in a Major League Baseball game. That landmark moment came on Sept. 23, 1956, as Virgil, playing for the New York Giants, started the game against the Philadelphia Phillies at third base.

Thank you so much for your time once more! Have a great rest of your Tuesday and, as always, keep solving!! 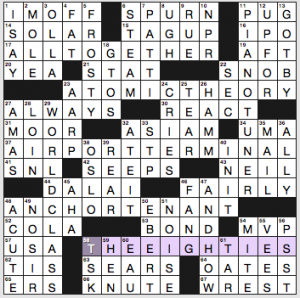 The revealer is 58a. [When Pac-Man and Rubik’s Cube were popular … or a phonetic hint for 17-, 23-, 37- and 48-Across], THE EIGHTIES, and if you pronounce EIGHTIES a little weird, you get “A.T.’s”—so the four themers are random phrases with A.T. initials. ALL TOGETHER, ATOMIC THEORY, AIRPORT TERMINAL, ANCHOR TENANT. With or without a cutesy revealer, I’m not a fan of “these unrelated phrases have the same initials” themes.

This week’s “What are these doing in a Tuesday puzzle?” entries are Latin AMAS, Spanish-inflected OLLA, outmoded GTOS, KNUTE, VEES ([Pair of skivvies?] means “pair of letters in the word skivvies, or VV, or V’s, or VEES when you spell it out, which is so rarely done outside of crosswords), and a bunch of short multi-word phrases that are likely to throw newbies: I’M OFF, TAG UP, AS I AM, I SAY, NO SIR, ATE IT, IN IT, UP FOR, GOT BY. That felt like an uncommonly large number of 4- to 5-letter multi-word answers. Somebody count them in other 15×15 themed puzzles and tell me if my feeling is correct.

All is (hopefully!) not lost in Tuesday’s WSJ puzzle: 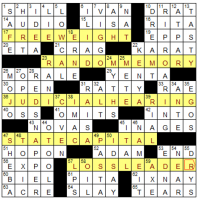 17A: FREE WEIGHT [Dumbbell, e.g.] – Weight loss
23A: RANDOM MEMORY [Data storage] – Memory loss
36A: JUDICIAL HEARING [Court proceeding] – Hearing loss
47A: STATE CAPITAL [Lincoln or Madison] – Capital loss? I’ve never heard of this before, but it’s apparently a financial thing.
57A: LOSS LEADER [Retailer’s drawing card, and what the last words of 17-, 23-, 36-, and 47-Across can be] – I’ve also never heard the phrase “drawing card” before, so I had to get the revealer from the crosses and work backwards from there to grok the theme.

So, the puzzle felt meh to me while solving and, looking back, still kind of feels that way. There wasn’t much sparkly fill except for maybe IXNAY. The theme entries certainly did their jobs, but they weren’t as exciting, interesting, or current as I’d hope them to be. Also, three of the themers have to do with physical/sensation losses from the body (weight, memory, hearing) and the last one seems randomly financial. I might have liked the theme a bit better if the last one were something like hair loss to be consistent with the rest.

#includemorewomen: So, here’s where I have a few substantive things to say. While I was excited to see some women represented in the puzzle this week, let’s look at how they were included. We have [“Insecure” star Issa ___] RAE, whose show you should check out if you haven’t already (it’s fantastic!) and [“Cimarron” writer] EDNA Ferber. Good so far! Then, we have the trio of RANI YENTA COVEN, each of which have some negative connotations – that’s not the best, but I’ll give the constructor the benefit of the doubt here. But … how are the other three women in the grid clued? “Lovely” RITA is only clued with respect to her patriarchally-expected disposition, RAISA Gorbachev is only clued with respect to her marriage, and accomplished actress Jessica BIEL IS ONLY CLUED WITH RESPECT TO HER ROLE AS A MOTHER. ::most intense eye roll emoji:: There’s certainly nothing wrong with being lovely, a wife, and/or a mother, but when that’s so much of what society imposes on women AND that’s the way that one chooses to clue these women, I take issue. Any of these women could have been clued in a way that, I don’t know, associates them for their professional accomplishments, talents, or skills. Or clue RITA with respect to EGOT-goddess RITA Moreno as a small way to celebrate her! (As usual, no nonsense in the comments section – we’re not here for it.)

* I do have one super positive / exciting addendum from last week’s review! Wendy L. Brandes and Martha Jones are indeed real and were the constructors of last week’s wonderful Tuesday puzzle. One of them reached out to me and we had a lovely chat. My apologies for the suspicions but it’s not uncommon around these parts for male constructors/editors to use female pseudonyms for whatever reasons. I am so looking forward to future puzzles by these constructors and I hope I’m lucky enough to be the one reviewing their puzzle! 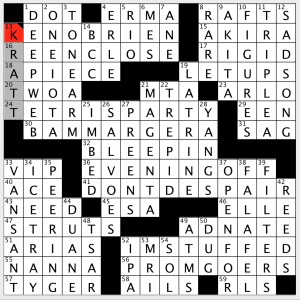 We have another Jonesin’ milestone this week: Puzzle 900! Yes, that is over seventeen years of making puzzles on a weekly basis. I am impressed. But keep them coming, Matt! These are some fun puzzles to solve. We have a super-wide-open 68-worder this week, and tons of fun entries. And yes, there is the obscure-pop-culture-reference-of-the-week, if not two or three of them! A solid 4.5 stars, and congrats, Matt, on 900!

Back to the work week grind! 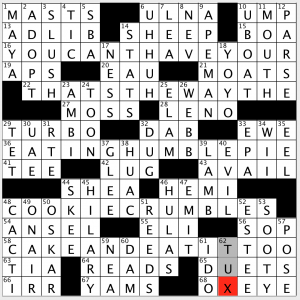 A fun Tuesday, as we get back to the grind. It’s another puzzle that is making me hungry! I’ll show you why:

Cake, pie and cookies in the same puzzle! The Trinity of Sweets! You cannot tell me you’re not hungry too! OK, perhaps it is just me with the rampant sweet tooth. But, although it was a little work to sort out what went where, I thought this was a clever way of intertwining some common food-related phrases. A solid 4.1 from me.

That is all! More from me this weekend.