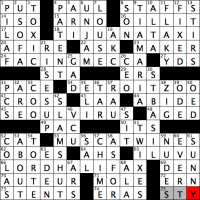 hello and welcome to episode #535 of matt gaffney’s weekly crossword contest, “That Really Sticks Out”. for this week 5 (but like a 3) puzzle, matt challenges us to name a familiar geographical region. what are the theme answers? there are six long answers in the grid, each including the name of a major city:

well, that was a struggle, but the meta itself was pretty easy, especially with a hint from the title. each of these cities is on a peninsula:

taking the first letters of these peninsulas in order gives BALKAN, so the balkan peninsula is the meta answer. (i’m sure anything like “the balkans” or just “balkan” would have been accepted.)

i liked this meta, but did not love it. the mechanism is straightforward and pleasing, but it definitely was off-putting that four of the six theme answers were unfamiliar to me, and a fifth (FACING MECCA) seemed a little arbitrary as a phrase; i would’ve preferred something like TOURIST MECCA. the reuse of arabian also felt a little inelegant. i admit that i don’t have a suggested alternative theme answer featuring a city on a different A peninsula. (ankara is on the anatolian peninsula, but i can’t think of a phrase including ANKARA. there’s an antarctic peninsula and an alaskan peninsula, but neither of them have any cities.) anyway, perhaps this is a reason to have a different meta answer than BALKAN, spelled with only one A.

well, that’s all i’ve got this week. how’d you like this one?