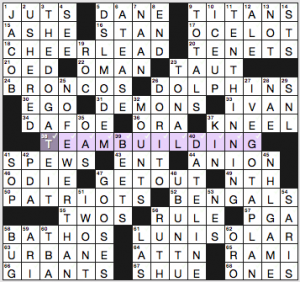 The theme is TEAM BUILDING, and six theme answers are the names of NFL teams, all clued as the combination of two unrelated words:

Half contain an abbreviation-ish word, half don’t (ergo, it’s balanced).

Hardest vocab in the grid: 61a. [Concerning both the moon and sun’s motions], LUNISOLAR / 58a. [Sentimentality], BATHOS. Dang it, I’d filled in PATHOS and didn’t bother to check the 58d crossing. PUG is just as much a word as BUG is. (You’ve got to check your crossings in a crossword tournament setting!)

Fave fill: Topical CHEERLEAD, GET OUT, “THE DOG ATE IT,” TENTH INNING, “I’VE GOT A PLAN.”

The title hints that the grid will be employing the linguistic construction known as “shm-reduplication.” But that’s not quite right. When it comes down to it, this is just an add-a-sound theme; it’s just that the sound that’s added forms the creation of words that come to us from the Yiddish language. 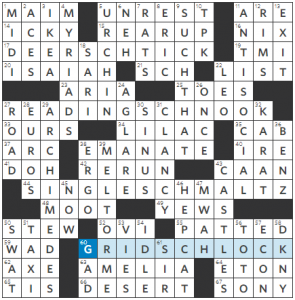 Fun and playful theme. It’s probably a good thing that Jeff didn’t use MUCKETY MUCK or ALL NIGHT LONG as base phrases.

I’m really digging ARCHIMEDES [Man with a screwy invention] in the fill, though it was hard for me to see since I had SIX at 59a [High roller’s roll] for quite a while. The clue of course refers to the Archimedes’ screw which is a large inclined screw for transferring water (or other material) from a lower level to a higher level.

ANTISOCIAL is the corresponding long Down which, weirdly, is clued as a noun [Not a company man?].  SUCH THAT, MEL TORME (who rarely makes an appearance with both names), MYRIADS, and CASTLES round out the most sparkly stuff.

Not keen on AGLARE, but that’s about it for GRID SCHLOCK.

Oooh, hey look, if you move the initial E from 38a EMANATE to the end, you get MANATEE. Fun! 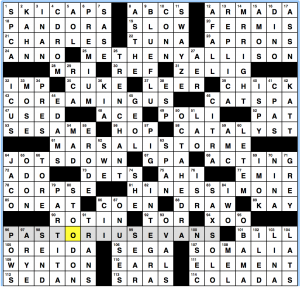 Today’s AVCX feels like a marvel of construction, and I wouldn’t expect anything less from a Francis Heaney puzzle for this venue.  It definitely earns its 4.5/5 on the difficulty scale, if only on the merits of utilizing a subject matter that I’m pretty sure isn’t in everyone’s wheelhouse.

Each of today’s theme answers is composed from the last names of multiple jazz musicians:

What makes this more impressive, to me at least, is that the grid also includes the first names of all musicians used elsewhere in the grid.  This added an extra level of difficulty, since I could use the clues to determine what was going on in each theme entry, but didn’t know the full names of all of these jazz artists.  It’s all very impressive, and it’s a cherry on top that the rest of the cluing/fill mostly avoids staleness. 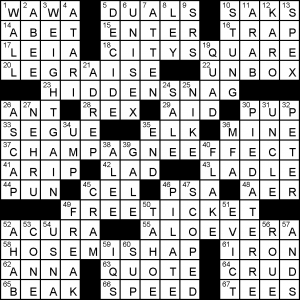 I’m not a fan of this theme type. Dry definitions that you have to painfully piece together. In this case it’s five different verbs associated with sports (probably intended as relating to gridiron?) – BLOCK, CATCH, KICK, PASS and RUN.

I did enjoy the terse [Tiny Lab] PUP and [Forest ranger] ELK misdirections a lot. I mis-stepped with [Reason to purchase a new belt] putting WEIGHTloss first; some of us are more optimistic!