Fireball is back this week! But it’s a contest, so the write-up will be posted later in the week after the contest deadline has passed. 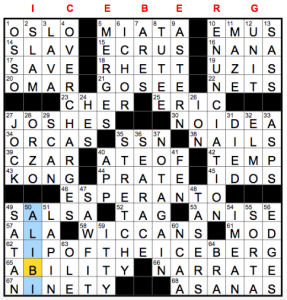 Apologies for the slightly grainy image this week — it’s a screenshot of a screenshot, but I wanted to make sure I illustrated this week’s beautiful theme.

Jeff Chen shows us at 62a that this lovely grid with bilateral symmetry is just the TIP OF THE ICEBERG [Hidden trouble indicator … or what you’ll need to finish this crossword?]. And although every entry in the grid is legitimate, seven of the down entries along the top of the grid require an extra letter to match their clues:

This is an extraordinarily beautiful puzzle. The fill is sparkling clean. The theme is beyond clever, with seven very nicely chosen theme entries doing double duty (plus, of course, the revealer TIP OF THE ICEBERG). The execution has layers, with (a) solving the revealer, (b) discovering the seven I C E B E R G letters, and (c) noticing the grid art. The clues were difficult but fair, with some really nice ones sprinkled throughout ([Leader of the land down under?] for SATAN, [Exchange of swear words?] for I DOS, [Puzzle in which people take turns solving] for MAZE). This is everything I want in a Thursday puzzle, and I’d be very happy to see it in the Puzzle of the Year discussion. Bravo!

Aptly titled puzzle which reveals the theme with this clue [Action needed to spot the four fliers in the theme answers] and this answer FLIP THE BIRD. Ha! Certain birds are spelled backward within the long theme answers. Those birds are found elsewhere in the grid with the clues [Flier #x].

This exact theme, by Emily Carroll, appeared in the NYT just over a month ago. 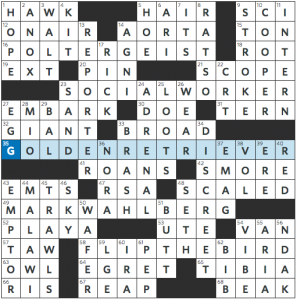 The Carroll puzzle had POLTERGEIST as well, but that was the only shared answer. It also featured PIANO REHEARSAL (HERON) and GOLDEN ARCHES (CRANE), both very nice.

Today’s standout entry has to be MARK WAHLBERG which is the only common-enough possibility to hide the word HAWK. A gem of a find. EGRET can also be found in POSTMASTER GENERAL, but that’s too long, as well as COMPUTER GEEK, but that feels less in-the-language to me.

Hiding OWL and TERN are of less interest to me because one is so short and the other has very common letters. There are many possibilities for OWL (WEASEL WORDS, REAL WORLD, STEEL WOOL, DEVIL WORSHIP), and while there aren’t as many for TERN (IN RETROSPECT, BATMAN RETURNS) it’s always more fun when crunchier letters are involved.

Still, all the theme answers today are strong, and when you add the revealer and all the actual birds themselves, that’s a heckuva lot of theme material to deal with. And for the most part, it’s handled well. A good amount of the short stuff is kludgy (TAW, RIS, EMAG, BAL, LGE) but that’s to be expected when there’s so much theme.

Compare this to the NYT puzzle which had just four total theme answers (and circles). However, that one had much stronger non-theme fill (CHEAP SHOT, KILLS TIME, ERROR-FREE, TABLE LAMP, etc.) whereas today’s best is limited to REPORTER, ADRENAL, and DISCREET. As always, there’s a trade-off when constructing a themed puzzle, and these two grids illustrate that fact perfectly.

Fortunately for me, I have pretty good short-term memory loss, so I didn’t recall the Carroll puzzle while solving this one. So it still felt new and fresh and fun. Four stars from me.

I didn’t remember the clown doll attack from POLTERGEIST, so here it is for your enjoyment. 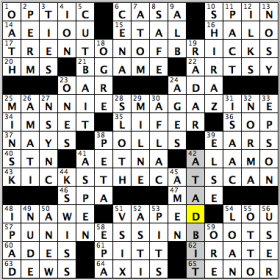 Good afternoon, friends! I’m (Ade) stepping in for Ben on this Thursday, taking just a little bit of time off from covering US Open matches that end past 1 AM to talk some crosswords. Brendan’s offering today, according to his website, was a crossword that appeared as one of the puzzles in the 2018 Boswords crossword puzzle tournament, which I have yet to attend in its two years of existence. Furthermore, I have yet to lay my eyes on any crossword featured in any of the two Boswords tournaments…until now!

Today’s earworm-y theme involved puns that were created when the titles of different musicals were inserted into common phrases or nouns. This definitely would have been fun to do in a crossword puzzle tournament setting.

Here’s some more Baader-Meinhof/frequency illusion goodness: Last night, while walking around the media room at the US Open, I noticed one person wearing K-SWISS sneakers and I thought to myself, “I can’t remember the last time I saw anyone wearing K-Swiss shoes.” (44D: [Sneaker company with a blue and red striped shield logo]). Well, that didn’t take long in keeping K-Swiss in my mind for a few more hours now. I can’t say that I’ve ever been too interested in trying to spot out words/phrases that contain one of each of the five vowels, AEIOU, but I am fascinated by those who can spot them out and then display it on a Facebook page dedicated to showing off those alphabetic white whales (14A: [Supervocalic word’s quintet]). I don’t doubt that B-GAME is an actual phrase, but I know it’s something I don’t use, as opposed to something like “B-team” (21A: [Second-best effort]). Initially spelled SHIRAZ as “Chiraz,” so that tells you how much I know about Aussie alcohol (10D: [Australian red wine]). Probably my favorite non-themed fill of the day was CUT BAIT, something I needed to do more these past two weeks when I’ve decided to stay and watch tennis matches deep into the early morning instead of making my way home and getting some decent amount of sleep (5D: [Pursue something else]). Alright, time to cut bait on this part of the blog.

“Sports will make you smarter” moment of the day: OTTO (55D: [Cinque + tre]) – In the 1960s and 1970s, the Oakland Raiders were probably the most dynamic offense in professional football, and the one person who touched the ball on every offensive play throughout that period was their Hall-of-Fame center, Jim OTTO. Inducted into the Pro Football Hall of Fame in 1980, Otto was best-known for wearing the number “00,” as, normally, offensive lineman wear numbers between 50 and 79. Otto’s professional career started in 1960, the same time as the beginning of the American Football League (AFL), the upstart rival to the established National Football League (NFL). Otto ended up being just one of 20 players to play in all 10 years of the AFL’s existence before the 1970 AFL-NFL merger.

Thank you so much for the time, everybody, and I’ll see you once again next Tuesday with Liz’s Crossword Nation blog! Have a great rest of your Thursday. 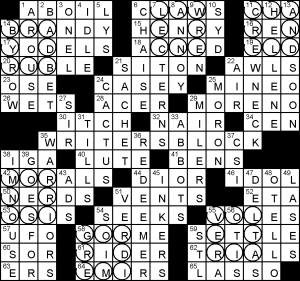 The puzzle theme is a bold proposition, and possibly borne out of a constructor’s frustration. Six eight letter authors are spelt out in donuts, and the raison d’etre is found in the middle: they’re WRITERSBLOCK(s). The top row are sci-fi’s Ray BRADBURY, D.H. LAWRENCE (nod to LAWRENCE Durrell, and hardboiled Raymond CHANDLER. The bottom is complemented by Nobellists Toni MORRISON and Nadine GORDIMER and the nom-de-plume VOLTAIRE.

The downside of such large rings is inevitable crappy short answers as those rings place considerable pressure on the surrounding grid. The puzzle is well-designed to mitigate such pressures, being much more segmented than most and also extra-wide. Still, you will only have enjoyed the puzzle provided you could tolerate loopy answers like SOR, SOIM, and CEN.