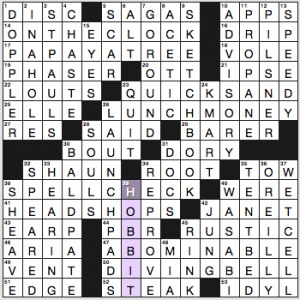 Is it just me or did this play more like a Saturday puzzle? Could be I’m just distracted, who knows.

I like the criss-crossing 9s and 10s that are compound words or similar-sounding phrases. You’ve got SKETCHBOOK, QUICKSAND, LUNCH MONEY on the right, LAUNCHPADS, SPELL-CHECK, HEAD SHOPS on the left. {I accidentally doubled the E when entering SKETCH and finished it with PAD, which slowed my progress on the puzzle.) Also nice: ON THE CLOCK, ST. PAUL’S, DOPPLER (big fan of your radar and your ultrasound, sir), GO-ROUND, a PILSNER glass, HOBBIT.

3.8 stars from me. I like my Friday puzzles to have more of a fun vibe than I got from this one.

If you work on a college campus, as I do, this time of year means lots of confused parents driving the wrong way on one-way streets and taking up all of the staff parking spaces. Yay! I extend compassion, given how many friends and blogging colleagues were those very confused parents at colleges and universities all across the country. The Chronicle of Higher Ed returns from hiatus and celebrates the beginning of the new academic year with a higher-ed-themed puzzle! This one’s from a proud alum of the titular “Cambridge University,” Peter Gordon, who is “Class of 1988 at 65 Across.”

Embedded within the three longest entries are longer abbreviations for Massachusetts, Institute, and Technology: CHRISTMAS SPIRIT, TENDERLOIN STEAK, CHARLOTTE CHURCH (red and gray are MIT’s colors — go Engineers!). Nice finds, all three of those, in that the four-letter abbreviation spans both words. I’m wondering, though, if TENDERLOIN STEAK is redundant? I’ve generally heard tenderloin cut, or beef or pork tenderloin without the steak. Isn’t the steak cut from the tenderloin the filet mignon? With that right next to ROMA TOMATO, I’m reminded that I need to cook dinner, so lemme finish up here. Fill-wise, it’s Peter Gordon, so things are smooth and clean, with nice long downs like SHORT LINE, DRY ERASE, and JET STREAM. As one would expect from the Chronicle, OTIS is clued in regard to education — [60. Los Angeles’s ___ College of Art and Design] — rather than the elevator company, and there’s some nice cultural trivia, like [36d: “Citizen Kane” studio]: RKO and [31d: George Orwell’s real first name]: ERIC Blair, and a lovely quotation, with which I couldn’t agree more: [28a: “Service to others is the rent you pay for your room here on earth” speaker]: ALI. 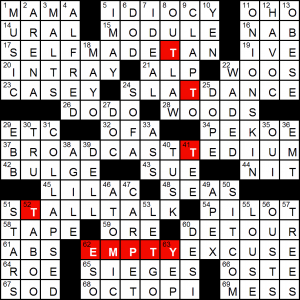 EMPTYEXCUSE feels a little off as a revealer. It doesn’t Google that well, and dictionaries prefer empty words/talk. It is two words someone may say together, rather than an established phrase, though I concede those are two points on a continuum. The technical EMPTYSET may have worked better? Another issue is that, with such a broadly applicable change of M to T, there isn’t much consistency in execution. With extraneous T’s and M’s in all of the phrases, and the changes in the four theme answers occurring in different places, it was a tad confusing during solving. Some you may have enjoyed the puns regardless and found this needlessly nitpicking, and that’s OK too.

Not really too much more to highlight. There were very few truly difficult entries. I didn’t know the particular (crufty?) SUE answer. There was something of an early 1970s rock vibe with [“___ Told Me (Not to Come)”: 1970 #1 hit], MAMA. Early Randy Newman success, albeit as a songwriter and [Storied engineer Jones], CASEY. I ignored “storied” and initially had INIGO.