It’s Sunday night!  That means the Monday puzzle is out!  Let’s crossword!

This Monday’s puzzle is from Jacob Stulberg.  Let’s peek under the hood: 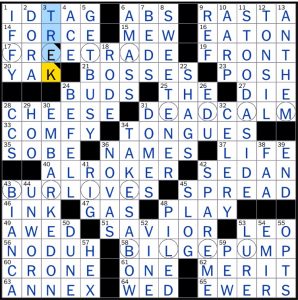 Cheesy though the theme may be (I’m speaking literally here – we’ve got FETA, EDAM, BRIE, and BLEU spanning the theme entries), this actually felt like a solid Monday puzzle.  I associate BURL IVES with “Rudolph the Red-Nosed Reindeer” more than “Cat on a Hot Tin Roof”, but that could be a generational difference.

Fill-wise, I don’t love ID TAG as “Sticker that says who you are” – it’s a little IFFY.  ID BADGE or NAME TAG, sure, but somehow the combo of the two doesn’t quite work.  I haven’t seen a SOBE in years, but it’s nice to know they’re still producing iced tea and other drinks at your local convenience store.  AL ROKER has a Guinness World Record, as it turns out. I initially had “GET TO IT” instead of GET BUSY, and TRIP instead of TREK, which led to some grid-searching when I thought I had finished the puzzle.

Some fill-related gripes, but a pretty good start to the week nonetheless.

Today’s constructor won’t leave you strand-ed without a rope to safety … and neither will I! Let’s unravel this grid together: 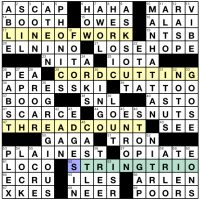 There’s a certain simple elegance that I enjoy about this theme and I think it fits well in a Monday puzzle. I like how the three theme entries and the revealer all play with different variations of STRING and all the themers are squarely in the language. Some of the fill in this puzzle felt tough for a Monday (ASCAP NTSB NITA APRESSKI BOOG XKES NOTTE), but my solve time was about average for LAT Monday puzzles, so the crosses must have been gettable. No Naticks in sight for me, at least.

#includemorewomen: Sadly, there are only two women represented in this week’s grid: NITA Strauss and Lady GAGA. I’m with my husband in Palm Springs for the weekend, so our homosexuality has naturally elevated to eleven. As such, I’d be remiss here if I didn’t lavish a bit of praise on the gay icon that is Lady GAGA. She’s back in the spotlight, playing one of the leads in the remake of A Star is Born. I can’t wait to see it and hear the raw power of her voice. Bradley Cooper who? And does she have the ever-elusive EGOT (or becoming a way to clue EGOT) in mind? Only time will tell. For now, I’ll echo Buzzfeed’s response to her at the Toronto International Film Festival this weekend (as seen in the picture above): yaaass!

The NFL season has started so we’ve got an aptly-themed grid today. 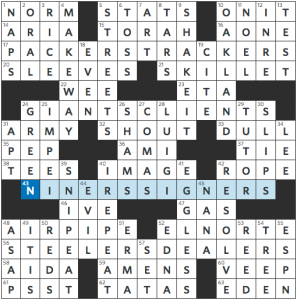 As straightforward a theme as they come: Made-up phrases whose second word rhymes with the team name in the first word.

I don’t see any other layer here, so that looks to be about it. As it is, I can’t get too excited about this theme. Maybe those who are new to crosswords will enjoy this one, but I felt the clues were lacking in zing and/or humor which could have drawn me in.

The rest of the grid is straightforward as well. I like MAKE WAY, “I REPEAT,” and EL NORTE. I didn’t know SHAKE IT [2008 Top Ten song by Metro Station], but it was easy enough to get with the crossings. Or maybe I was just thinking of The Cars’ Shake It Up or Taylor Swift’s Shake It Off. I wanted REGULATOR at 48a [Scuba mouthpiece attachment], but it turned out to be the less interesting AIR PIPE.

Not much else to mention here, so I’ll leave it at that. Three stars from me. 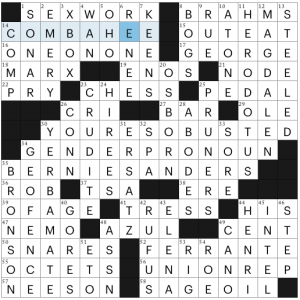 I’m finding it fascinating to see the differences in puzzle content between the New Yorker constructors’ work here and in other venues. These New Yorker themelesses are edited collectively by the team of constructors, without a gatekeeper overseeing puzzle selection. So there’s no editor saying “COMBAHEE is no-go, you’ll need to rework that section.” The constructors are pushing the envelope of what’s considered canonical, expanding the body of vocabulary and names seen in crosswords. (Berry may hew more to the same vibe as his newspaper crosswords, but many of the other four, including Natan, seem more adventuresome in their fill.)

Favorite fill/clues here: SEX WORK clued as [Subject of the anthology “A Vindication of the Rights of Whores”] (not sure “Whores” is gonna make it into a newspaper crossword). “YOU’RE SO BUSTED. GENDER PRONOUN. BERNIE SANDERS as an entry, let us not get into the rest of it. Writer ELENA/FERRANTE, deemed a big enough name that the two cross at a vowel. UNION REP, tricky clue of [One calling strikes, in short]. YERBA MATE. [Paying for a lift, maybe] to clue SORE, as in “I overdid at the gym lifting weights, now I’m really paying for it because my quads are killing me.” STEP clued as [Group dance with stomps and claps]; it’s a black thing. Interesting trivia in the Robinson CANO clue, [M.L.B. star named for Jackie Robinson].

Did not know: GEOFENCE, [Digital demarcation]. COMBAHEE, [__ River Collective, seventies black feminist group]. The COMBAHEE/RENEE crossing was one I gambled on, as [“Who Killed Vincent Chin?” documentarian Tajima-Peña] isn’t a name I knew, but I’m certainly not going to argue that we shouldn’t be expected to know her name. I’ve also recently shifted my stance on which short entries I’ll call out as hard/obscure other crosswords—if it’s a word, usage, or name that’s not super-familiar to white Americans, but is common among other demographics, I’m not going to suggest the answer shouldn’t be in mainstream puzzles. We can all expand our horizons and vocabularies.

L’Shanah tovah to those who celebrate, and if this isn’t the new year for you, how about I just say hi? Hi! 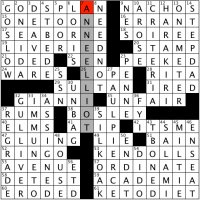