Title: “Borderline Crazy”
Prompt: The meta for this puzzle is a song from the ’00s whose title has less than ten letters.
Answer: ???

Well, I’ve been taunting Pete all year to provide me with a real challenge, and it appears to have arrived. With 2 hours and 17 minutes left before the deadline, 87 solvers have figured out this meta, but my name does not appear among them. I’ve figured out the first step, but what I’m assuming is both the second and final step eludes me, so I’m going to employ the Pahkian tactic of solve-blogging and see if that produces results. 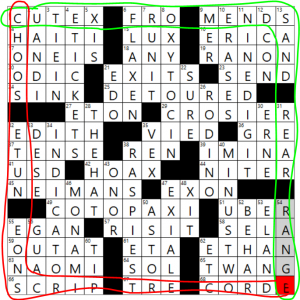 I thought this meta would fall quickly: nudged from the title, I quickly saw that, starting from the 1-square, border entries spell CHOOSE TUNE ON SCRIPT RECORD / CUT EX FROM ENDS AND REARRANGE. I see now that 1-A has a (1) appended and 1-D has a (2), so maybe that will come into play.

Anyway, I figured I’d get the meta soon from from here, but two hours later…nada. I scoured the discography of the band the Script, but the only song I could find with an EX anywhere in it was “Exit Wounds.” But there’s only an EX on one end of that, not both, and the resulting ITWOUNDS didn’t anagram into anything that I could see.

Could EX mean E and the X something else, like HUG or TEN? I looked for songs starting with E and ending in TEN or HUG, but nothing. And something this list-comb-heavy doesn’t seem like Pete’s style, so let me take a step back.

Maybe I need to take the two steps separately — 1) there are five EX’s in the grid, all at either the beginning or the end of a word. That could be coincidental, but seems promising. They are:

So cut X from the ends of those and we have CUTITSVONHALE. But I can’t find any meaningful anagram of that (could be a lot of things), and even just using the pieces CUT / ITS / V / ON / HALE does seem to lead anywhere.

OK, I found something. There’s a Script song called “THIS = LOVE” and those remaining 13 letters contain those 8, with ACNTU left over. Probably just a coincidence, since I don’t see any way to make that work. Am I supposed to be counting the CUT from CUTEX? If I don’t then there are only 10 letters, ITSVONHALE. It’s odd that 8 of those 10 letters are all the letters in “This = Love” and that that title does technically have less than ten letters since = isn’t a letter, but why is the AN left over? It seems like it almost fits — the second half of the instructions tell us to choose the tune from a Script record, so it sounds like the meta answer is indeed going to be a Script song. But it’s too strange that there’s no explanation for why AN is left over. Plus we’re looking for “a song from the ’00s” and “This = Love” is from 2010, no wrong decade.

OK, I’m about out of ideas. It seems to me that the 00’s end on Dec. 31st, 2009, so I’m guessing the song has to be from the only Script album in the time frame, which is their self-titled debut. The four songs on that album that have less than ten letters in their name are “Rusty Halo,” “I’m Yours,” and their hits “Breakeven” and “We Cry.”

OK, looks like I’m beat. I picked “Rusty Halo” as my Hail Mary since it looks like it could anagram into something but I really have no idea. Someone who got it let me know in comments.