Posted on September 9, 2018 by LauraB
10ish minutes grid, about an afternoon meta (Laura) 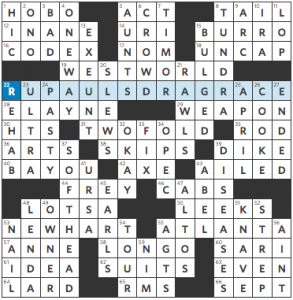 This week we’ve got a grid with left-right symmetry, and we’re looking for a two-word phrase.

I didn’t see any entries into this meta, even using some tried-and-true extraction methods: making lists, looking at letter patterns, etc. Thinking laterally, I tried another approach, and started ideating on what other things the shows had in common: the first three all involve hosts, the second two are about college dropouts; they’re all currently being broadcast except Newhart — but nothing. Then I made a list of the networks each show has appeared on (mostly; RuPaul’s Drag Race has been on both LOGO and VH1) — didn’t really see anything there, until the slightest of nudges from a pal in my solving group led me back to the networks, which are, respectively:

… and there it was, right at [1a: Bindle bearer]: HOBO. For each network, there is a corresponding additional entry in the grid that has one extra letter, like so:

… which makes ON AIR, a two-word phrase that is somewhat synonymous with the puzzle’s title, “Now Showing.”

This was a nice one, just tough enough without being maddening, and it rewarded my TV trivia knowledge. What did you think?