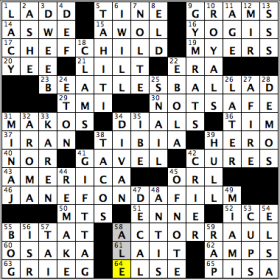 Good day, crossword savants! I hope you’re doing well today and enjoying some decent weather to begin your Tuesday. It has been a while since I’ve come across the “different interpretation of the same exact clue” theme in a grid, but that’s what we have here. (I’m sure someone will be able to explain this specific type of theme much better than I just did now.) Anyways, JULIA is the clue to each of the four theme entries, and each of the entries describes a different person who happens to actually be named “Julia,” real and fictional.

Not sure if there was any intent with this, but loved the clue for (town) CRIER (42D: [Colonial newscaster]), especially since it’s in the same grid as AMERICA, with bellmen being a staple of the Colonial era in America (43A: [North or South continent]). “Oyez!! Oyez!!!! Today’s crossword is helping to keep alive the history of the town crier!!” There’s a 15 percent chance that I’ll dress up as a town crier for Halloween now. Does someone have a bell that I can borrow?

For those of you in the know about these sorts of things (and I am sure many of you are), seeing the clue to MINAJ might have reminded you of an incident a couple of days ago when she and another hip-hop star, Cardi B, got into a skirmish during a Fashion Week event in New York City, one that led to the latter having a hematoma-looking knot above her eye (31D: [“Va Va Voom” singer Nicki]). Speaking of leading ladies, we have a number of women in this grid, real and fictional, from LADD (1A: [“Charlie’s Angels” actress Cheryl]) at the very beginning to KAREN (33D: [Carpenter with a memorable voice]) to ELSA (54D: [Anna’s sister in “Frozen”]) to the ladies mentioned in the first three theme entries. But there is one lady mentioned in the grid that is currently trending worldwide and is soon to be, possibly, the next big global star in sports.

“Sports will make you smarter” moment of the day: OSAKA (60A: [Tennis star Naomi _____, winner of the 2018 U.S. Open (she’s the first Japanese tennis player to win a Grand Slam singles title)]) – I can imagine Liz just waiting for match point on Saturday night to officially green-light this clue for this week’s puzzle!! It is indeed true that the 20-year-old Osaka, born in Japan before moving with her family to Long Island when she was three and to Florida when she was eight, is the first Japanese singles tennis player to win a major, doing so just three days ago when she defeated her childhood idol, Serena Williams, 6-2, 6-4, in the US Open final. If you’re interested in knowing a little bit more about her, I encourage you to read this feature on Osaka from the wonderful website called A Lot of Sports Talk, one that includes the story of how Osaka, born to a Japanese mother and a Haitian father, completed a book report on Serena while in third grade and dreamed about one day playing her in a US Open final. Dreams do indeed come true, folks!!

Thank you very much for the time you took out of your day to read this blog! Have a great rest of your Tuesday and, as always, keep solving!! 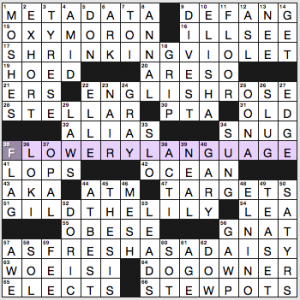 Quick recap tonight, as I want to finish editing another puzzle before bedtime! Theme is 35a. [High-flown speech or writing … or a description of 17-, 22-, 51- and 57-Across?], FLOWERY LANGUAGE. Various phrases that include flower names round out the theme: SHRINKING VIOLET, ENGLISH ROSE, GILD THE LILY, and AS FRESH AS A DAISY (that first AS felt weird to me). Works fine.

Umm, have the crossword gods been listening to me? Talk about a dream puzzle! Gary Larson (not the cartoonist, so I’m told) is here with his fabulous WSJ debut: 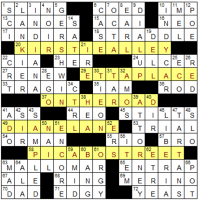 The last name of each themer is a synonym for ROAD that you might see on a street sign: ALLEY, PLACE, LANE, and STREET. Nice!

Let’s talk about all the reasons I am specifically in love with this puzzle:
– The theme entries are all accomplished women, clued specifically with respect to their accomplishments. Only ETTA PLACE is clued with respect to the men in her life, but it feels more like a “she was important but has been overlooked for years, so let’s include her now” kind of thing. (See Rosalind Franklin with respect to Watson & Crick.)
– This same theme could have been made with all male themers or themers representing a mix of genders … but it wasn’t! The constructor made the conscious decision to feature all female themers and I am HERE. FOR. THAT. <3
– There are a number of women included in the puzzle that weren’t even theme-related: INDIRA Gandhi, HER, Suze ORMAN, and Tori AMOS. Bonus female representation! <3

My only ding against this puzzle is that, aside from INDIRA, every other woman (and person, for that matter) in the puzzle is white. We do have lesbian (ORMAN) and gay icon (AMOS) entries, but some additional inclusion of women of color would have brought this puzzle to that next level of representation. But, compared to the limited amount of non-“white/straight/male” representation most puzzles provide, I’m counting this in the win column. ENCORE!

#includemorewomen: See <3 this entire puzzle <3 ! Future constructors (including myself): This is the current standard to which I’ll be comparing all future puzzles. I’m realistic in that every puzzle can’t have eight women represented … but there are plenty of puzzles out there with eight or more men represented! Let’s start seeing more like this. 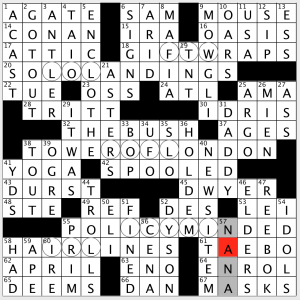 “Too Long; Didn’t Read” is what this stands for. Yes, I am guilty of this, especially on several Facebook posts that are obviously too long for consumption, especially while I am scanning at work! I am a little old for a lot of this text abbreviating, but I know most of what is in the circled spaces:

Fun times! As far as the title goes, there is an entry here where Deb Amlen, star of the NYTimes Wordplay blog, is quoted in the dictionary for this very entry. How cool is that? Talk about being immortalized! (At least in the online version!) Perhaps this was part of the inspiration for this puzzle? A solid 4.5 stars from me. 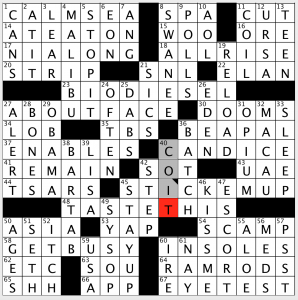 Am I missing something, or is this a themeless on a Tuesday? Oh wait: look at the clues!

I almost missed it! Lots of different “orders” at work here. Very clever, and I sure this was fun to brainstorm. Still a fairly easy puzzle, but I think the theme is hard to find a) when you’re solving quickly, and b) when  they aren’t all the longest answers in the grid, like we’re used to. Some of the themers are three letters long! 78 words in this one, which is up near the upper limit, but a relaxing solve nonetheless. 4.1 stars from me.