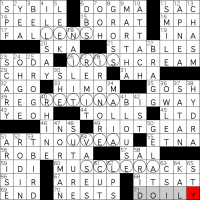 hello and welcome to episode #536 of matt gaffney’s weekly crossword contest, “Part Time”. i solved this week 1 puzzle without the instructions, and for once, that was the perfect amount of added challenge. what are the theme answers? well, there are five long acrosses in the grid:

it took me a few minutes of squinting at the answers, and the title, before RETINA jumped out at me from the middle of REGRET IN A BIG WAY. as you can see, each of the theme answers contains part of the eye: LENS, IRIS, RETINA, UVEA (nice find!) and SCLERA (whoa). since the contest instructions do indeed ask for a part of the body, we’re done here.