Sorry for the delay! We had a lovely time at the beach and dawdled a bit coming home. Then my computer crashed while I was doing the puzzle. Anyway, here we are.

We have four theme phrases that have something in common. 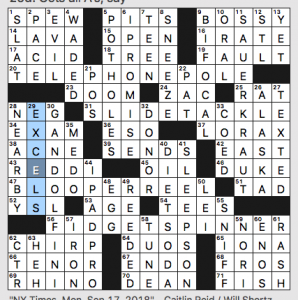 POLE, TACKLE, REEL, and SPINNER  are the key words, as explained by 71a: [Use the items found at the ends of the answers to 20-, 31-, 47-, and 56-Across], which is FISH. I figured this out with TACKLE, helped along by spending the weekend in a real honest-to-goodness fishing village.

What I didn’t know before I did this puzzle: that highway crews fill in POTHOLES. I live in Pennsylvania.

This pleasant Monday puzzle shouldn’t end up being your mortal enemy. If it is, though, we can bring in the medical examiner. Let’s see what Craig Stowe has in store for us: 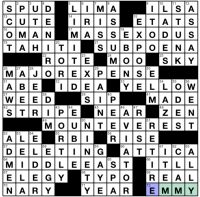 17A: MASS EXODUS [Large-scale departure]
26A: MAJOR EXPENSE [Cost of a car, in most family budgets] – Or the cost of rent/living in most metropolitan areas, these days!
49A: MOUNT EVEREST [Edmund Hillary’s conquest] – Want an example of the simple ways in which people of color are erased from our collective histories? Note Tenzing Norgay’s omission from this clue – he was the Sherpa who co-climbed Everest with Hillary on that first full ascent. Arguably, the climb wouldn’t have been possible without Norgay.
64A: MIDDLE EAST [Region including Egypt, Israel, etc.] – Another example of what we prioritize in our tellings and retellings of history can be found in this clue. Out of all the countries that could have been used in this clue, which ones were and weren’t? The one caveat to this mention is that Yemen and OMAN do appear at 16A, which was nice to see.
72A: EMMY [TV award, and a homophonic hint to the four longest answers in this puzzle] – Y’all know I’m always here for some homophonia. <3

A strong, consistent Monday theme with a CUTE revealer and super clean grid? I’ll take it! I almost set a record Monday LAT solving time on this puzzle, which speaks to how smooth the grid and cluing were. LADES and EUBIE Blake might be tough for an early-week puzzle, though I’m always glad to see the inclusion of people of color in crosswords. Hi also to Marvin GAYE!

#includemorewomen: In this week’s puzzle, we only saw the same women we tend to see frequently here: ILSA from Casablanca, TORI Amos, and [Bizet opera priestess] LEILA (next to ADMEN, I might point out). Instead, since it’s such a timely puzzle with this year’s Emmy’s tonight, I’ll take a moment to celebrate one noticeable Emmy snub: Jodie Comer, who played the jaw-droppingly amazing Villainelle on Killing Eve. Of course I’m excited to see Sandra Oh nominated for her work on the show but, seriously, #justiceforjodie. I don’t know that I’ve ever been as entranced, captivated, or impressed by a villain as I was with Comer’s Villainelle and I’m so desperate for a second season of the show. Her work expands the range of what can be expected and anticipated of well-written female characters on TV. And in case you were wondering, Killing Eve passes the Bechdel Test over and over again. <3

Theme: Animal metaphors in the form noun OF THE location. 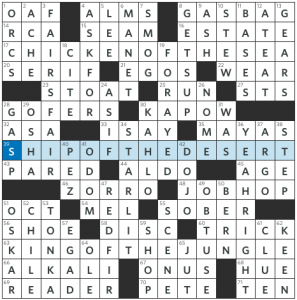 Only three themers, but they’re all lovely grid-spanners.

This seemed like such an obvious theme that I thought it had surely been done before. But I could find no other instance of it in the cruciverb.com database, so it looks to be brand new. In that case, I’m very impressed at Mr. Stulberg’s finds. This is one of those, “Why didn’t I think of that” themes.

Small demerit for having another animal in an entry (CHICKEN), but I suppose it’s not a wild animal. But then again, neither are camels. At least, we don’t usually think of them as wild animals.

The rest of the grid is fairly clean and lively with colorful long Downs “FAIR’S FAIR” and “YEAH, RIGHT.” STARLIT provides a lovely image, and I also like GASBAG, GOFERS, and KAPOW.

JOB HOP [Keep changing positions?] sounds odd to me. I don’t recall hearing it before, but I can’t think of another term that means the same thing. Also, RED FIR [Many a Christmas tree]? We typically see Noble, Douglas, or Fraser Firs when we’re out tree hunting. Can’t say as I’ve ever seen a RED FIR.

A nice and lively start to the week. 3.6 stars.

Whenever I come across the word OBTUSE, I always think of The Shawshank Redemption. 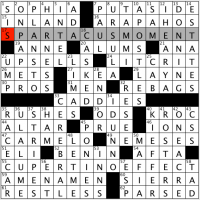 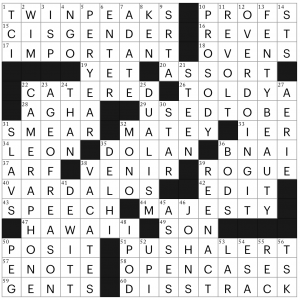 Some nice meaty stacks in this week’s New Yorker puzzle – we’ve got TWIN PEAKS, CISGENDER, and IMPORTANT in the upper left corner, balanced by PUSH ALERT, OPEN CASES, and DISS TRACK in the lower right giving some nice structure.  There’s some great long down fill, too – OVERDOING IT (“Burning the candle at both ends”), FENTY BEAUTY (“Rihanna brand that netted more than seventy-two million dollars in its first month” – DANG, Rihanna!), CAMERA PHONE (rightly noted as having “revolutionized citizen journalism” in the cluing), and AGE OF REASON (“Enlightenment, in other words”)

In a nice bit of synchronicity, today’s featured clue for author Helen DEWITT (“‘The Last Samurai’ author”) was right at the forefront of my brain, thanks to an article from New York magazine naming “The Last Samurai” as Book of the Century in its stab at an early 21st-century literary canon.  It’s gone onto my to-read list along with ~20 other titles from their list, and I’m looking forward to digging into it down the road.

A nicely structured puzzle – fill that felt fresh and wide-ranging (even in the 3-letter answers, which feels like a feat), good cluing, solid overall.