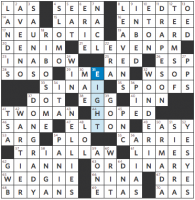 Matt challenges us to find “an adverb describing how you need to solve [the contest puzzle].” Our first hints are the title — are we supposed to find money and then follow it? — and this central clue/entry:

I printed out the grid once I filled it, and yelled “Show me the money!” at it — and whaddayaknow? There’s the money — i.e. global currencies hiding in the eight-letter entries, of which there are eight (hence our “double hint”). There’s a twitter bot that satirizes tired adages like “there’s no I in team” so I’ve been on the general lookout for unlikely hidden words — I found EURO first, then referred to this handy reference to find some of the others: 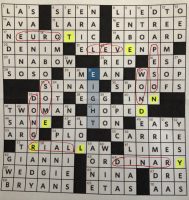 That’s the first step! Next, follow the money — if you take the first letter after each currency, in order of grid position (see my marked up grid, left) you get the adverb  TENDERLY — as in legal tender, or authorized currency. Follow the money to pieces of eight, tenderly. A few of the eight-letter entries needed to put this together were a tad obscure (RIBOSOME, DON GRADY), but overall I thought it fit together beautifully. Your thoughts?