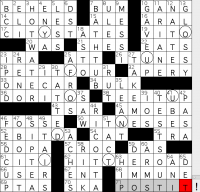 hello and welcome to episode #537 of matt gaffney’s weekly crossword contest, “Please Make a Note of It”. for this week 2 puzzle, matt challenges us to find a three-word note from me to solvers. what are the theme answers? that’s not entirely clear, but it must be true that the exclamation point after the last square is related somehow to the theme. the last across entry is {Common type of note} POST-IT, and it’s the key to the puzzle: we need to find all instances of IT in the grid and reinterpret “post” to mean: take the letter in the following square:

the letters following these ITs spell out YOU FOUND IT! (i’m assuming the ! is required, but maybe not), which is the meta answer.

this was a fun, easy week 2. the mechanism is very nice and i love the reinterpretation of POST-IT. the exclamation point was a little goofy, i thought, but i suppose it makes sense for consistency that every instance of IT should participate in the meta extraction, including the one in the “reveal” answer POST-IT. having the theme answers symmetrically located (except for the reveal in the bottom right) was an elegant touch.

before taking those letters in the following squares, i very briefly considered whether we were also supposed to reinterpret “note” to mean a musical note. ITUNES can become the word REUNES if you replace IT with the musical note RE, and CITY (states) can become CLAY if you change IT to LA. but CLAY STATES isn’t actually a thing (there’s really just kentucky, right?), and also it doesn’t work for all the other ITs.

in the fill, i loved {Team tennis tournament won by the U.S. in 2017} FED CUP. i didn’t love SIP TEA and TAKE ME, both of which seemed maybe a little roll-your-own. also, how many apple i-names is too many for one grid? with ITUNES in the theme and {Touch, for example} IPOD in the fill, i felt like this was pushing it. then {Some phones run on it} IOS was just clearly over the line.

overall, a mixed bag—some deductions, but the overriding funness of the theme wins out for me. four stars.