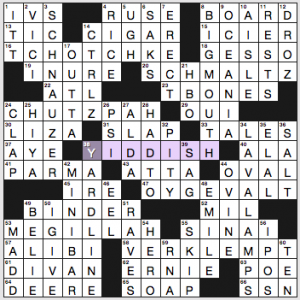 Who doesn’t love YIDDISH? It’s a delightful language with lots of colorful vocabulary that there’s no precise English equivalent to. Like kvell. “Bursting with pride” is a much more complicated construction than just that simple Yiddish verb. Here are the vocab tidbits:

I’m a little surprised this was deemed to be a Wednesday puzzle rather than a simple Tuesday. There’s no trickery at all, just familiarity with Yiddish terms that have pretty much made it into English.

Our theme is LIVING ON THE EDGE [Taking risks, or, in another sense, a description of this puzzle’s theme]. The perimeter of the grid consists of occupational titles, though they aren’t clued that way.

Proceeding clockwise from the NW: 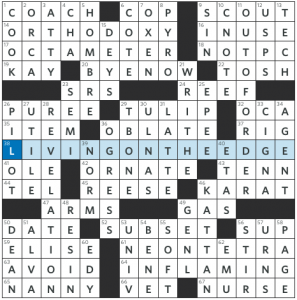 I enjoyed this solve. For a while I was trying to figure out the connection between ORTHODOXY, OCTAMETER, and NEON TETRA (answer: there is none because they’re not thematic). The revealer is perfect and also crosses two themers. Nice.

There’s a lot of theme material here, and I’m sure it put a lot of constraints on the grid. But Andrew is a pro, and he still gave us good stuff like OUT OF ORDER, REVELATION, OBLATE, ORNATE, “BYE, NOW,” and the aforementioned long entries. So I’m willing to look past UTILE, OCA, and DEYS [Old Algerian rulers].

I had trouble in the SE with 46d [Chris of TV’s “The Middle”], 52a [Primes, in relation to natural numbers, e.g.], and 64a [Provoking]. I thought the math clue was comparative, so I plunked in an -ER at the end, but now fully reading the clue, I see it wants a noun. Other tricky bits down there: As far as I knew, [Gilder’s unit] could’ve meant CARAT or KARAT, and since it was crossing a proper noun at the letter in question, I’m sure that was sticky for other people as well. And [Like a buyer’s market] is a tough clue for SOFT. In total, that corner gave me as much trouble as the rest of the grid put together. I finally saw INFLAMING and that broke it open for me. 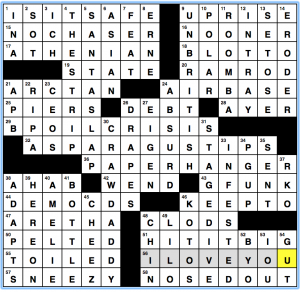 It’s a themeless week over at the AVCX, with a puzzle from KAC that feels just a little…off, compared to his usual output.  I’ve been spoiled by so many good puzzles from Kameron (both at the AVCX and now at the New Yorker) that today’s entry feels minor by comparison.  The grid itself is fine, but feels like it’s missing his typical beauty, and the fill feels similarly askew from his typical level of accessibility.

Things that frustrated me: Lots of fill that skewed a skosh obscure this week — the director of Suicide Squad (AYER), UNBRITISH, SETOSE (“Bristly, from the Latin”), Manfred EIGEN (1967 Chemistry Nobelist), PG UP 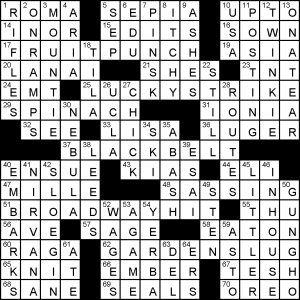 A stealth theme! Today we have five synonyms for “assault (with the hands)” at the end of long across answers: FRUITPUNCH, LUCKYSTRIKE, BLACKBELT, BROADWAYHIT and GARDENSLUG. It’s a theme that’s been done before and will be visited again. I appreciated that all the answers use their synonym in nonviolent ways.

Most puzzling moment: When I wanted both MINSK and SEPIA. I bet I wasn’t the only one that forgot that along with the much larger MINSK there is a city in Belarus called PINSK. That’s a Eastern European geography deep cut all right!

There was also some high-falutin’ Italian references. We often get [Italia] references in ROMA clues, but today, [città] was thrown in for good measure. Worth noting for future clues. [Ingredient in a Florentine dish], SPINACH – is that chicken Florentine? I was wholly unfamiliar with the dish referenced in [Saltimbocca herb], SAGE. Apparently it’s marinated veal wrapped in sage and prosciutto. Getting cooking schooling tonight! I have tried making several dishes that have appeared in crossword, but I don’t think the (almost) missus will go for either Chicken Florentine (doesn’t touch spinach) or Saltimbocca. I will have to stick to tomorrow’s meal plan of Beef Stroganoff with rice.

The other complete unknown for me was [Chef Jet __, frequent “Cutthroat Kitchen” judge], TILA. Never heard of the show, which must be jumping on the Masterchef / Iron Chef / Top Chef bandwagon?

From the “you don’t need to be a multiword entry to shine” file: NEBULA, NIRVANA, INHOUSE, GUNGHO.