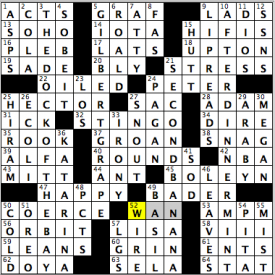 Hello once again, crossword lovers! I hope you’re doing well and that you’re all ready for the start of fall. If you’re not, today’s puzzle definitely did its best to get you into the spirit, doing so without all of the pumpkin spice ridiculousness that’s gripped the nation the past few years. In the grid, each of the four longest entries, all going down, end with a word that is also a type of leaf. A fifth down entry, LEAVES, along with its clue, lets you in on the theme (46D: [Falling ______ (sign of Autumn…and a hint to the puzzle theme]).

Though the grid went down pretty quickly in terms of solving, I absolutely was hung up on STINGO, as I now feel bad that I have yet to familiarize myself with the Meryl Streep movie mentioned in the clue (32A: [“Sophie’s Choice” narrator]). I know that the book, Sophie’s Choice, came first, but I only was familiar with it as a movie – one that I’ve never seen and now need to make an appointment for so I can check it off my “You haven’t seen that movie yet?!?” list. Actually, I did have one other hang-up while solving: filling in “so true” instead of SO BE IT after I had the first two letters typed out (4D: [“Amen!”]). Well, this grid also seemed like an ode to women who kicked ass athletically in the year of 1988, with both Stefanie “Steffi” GRAF (5A: [Only player to win the “Golden Slam” (four Grand Slam singles titles and Olympic Gold in the same calendar year]) cleaning house in tennis and KATARINA winning her second consecutive gold medal in figure skating in the 1988 Calgary Olympics (36D: [Olympic gold medalist Witt]). Maybe, one of these days, I’ll dedicate some time to talk about the “Battle of the Carmens,” the name given to the 1988 Winter Olympics figure skating competition between Witt and American Debi Thomas because the rivals both skated to Bizet’s Carmen in the gold-medal deciding long program. That was some must-see-TV back then! Well, speaking of musical compositions, we have HECTOR in the grid,, and that probably will make me look up on YouTube to make sure I’m familiar with the work mentioned in the clue (25A: [“Requiem” composer Berlioz]). That will make for some easy listening, I hope.

“Sports will make you smarter” moment of the day: BLY (20A: [Journalist Nellie]) – Former NFL cornerback Dré BLY was one of the best defensive backs in college football history before embarking on an 11-year professional career, starting when he was drafted by the St. Louis Rams in the second round of the 1999 NFL Draft. Bly ended up winning a Super Bowl with the Rams in his rookie season, and eventually was named to the Pro Bowl twice in his career (2003, 2004). Bly was named an All-American at cornerback in both 1996 and 1997 while at the University of North Carolina and, in 2014, was inducted into the College Football Hall of Fame.

Thank you very much for the time today! Have a great rest of your Tuesday and, as always, keep solving!!

Simply put, puzzles like today’s WSJ are what inspire me as a constructor. I’ve been in a constructing rut lately and this puzzle was enough of a breath of fresh air to re-energize me. It’s so fresh, engaging, and joyful! 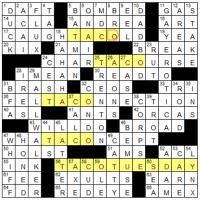 17A: CAUGHT A COLD [Came down with something] – Stay healthy and get your flu shots, everyone!
24A: CHART A COURSE [Do the navigator’s job] – At this point in the solve, I was sensing a C____ A C_____ theme, which slightly tripped me up on the next theme entry, but I’m OK with that for reasons I’ll get into below.
36A: FELT A CONNECTION [Get good vibes on the first date, say] – Such a lovely, in-the-language phrase! And the clue was not unnecessarily gendered, which I appreciate.
47A: WHAT A CONCEPT [Who’d’ve thunk it?] – I love the sass / sarcasm here.
56A: TACO TUESDAY [What this puzzle is celebrating, judging by what’s been “eaten” by the starred answers] – Yaaaaaassssss.

What a strong theme set and fun revealer. I really appreciated the consistency of the ___T A CO___ pattern shared by all the theme entries.

I don’t always remember to look at the constructor of a puzzle before I dive into it, but as soon as I saw some of the fantastic entries in this puzzle (REDEYE MALLWALKER BATMAN DADBOD GAYEROTICA LYNX), I stopped to look and was soooo pleased to be mid-solve in an Erik Agard puzzle. In fact, I was so pleasantly floored that he’d gotten GAYEROTICA into an official WSJ puzzle that I stopped mid-solve to tweet my joy! The cluing for the themers and the clues throughout the puzzle (especially for KIX ORCAS FDR TAG and BRO) were also fantastic and communicated Agard’s voice superbly. I also enjoyed seeing Olympic icon ADAM Rippon in the grid.

Looking back at the title (“Folding Inward”) gave me even more to appreciate about this puzzle. It’s a great double nod to both the shape of a taco as well as the fact that the word TACO is hidden within (or better put by the revealer clue, “eaten” by) each themer. And how perfect is it that this clean grid was clued perfectly to run on a TACO TUESDAY! ::hands up in celebration emoji:: ::taco emoji::

#includemorewomen: ANDREA Martin is a name that I’m happy to learn through this puzzle, but how can we not focus for a bit on the Minnesota LYNX? According to their Wikipedia page, the LYNX are four-time WNBA champions (most recently in 2017) and have qualified for the playoffs during ten of their twenty seasons. Wow! Interestingly, their stellar work extends beyond the court: “The Minnesota Lynx Foundation holds an annual “Catwalk for a Cure” event at the Mall of America during the WNBA’s Breast Health Awareness Week to raise funds for breast cancer related charities.” That’s an event even a MALLWALKER can enjoy! :D 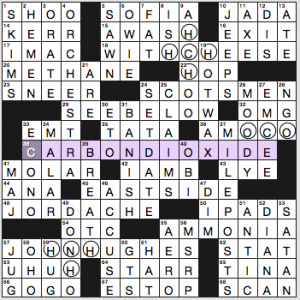 Gotta be quick, as I watched the Emmys late and need to get up early tomorrow. There are three gaseous theme entries, and their molecular structures are represented in the circled squares cross-referenced in the theme clues.

How does the theme hold up for the chemists among you? Are you enchanted or disgruntled?

Did not know: 5a. [European capital whose name most people incorrectly accent on the second syllable], SOFIA. SOF-ya! Who knew? My friend Jeff S who’s been to Bulgaria a couple times, I bet he knew. I’ve been saying it with three syllables all this time.

Awkward: MALAR, AWASH, ESTOP, ETO, GTS in a Tuesday puzzle. Also, having both IMAC and IPADS in the same grid.

Weird: 18a. [How a hamburger may be ordered], WITH CHEESE. *ahem* If you order it with cheese, it has become a cheeseburger. 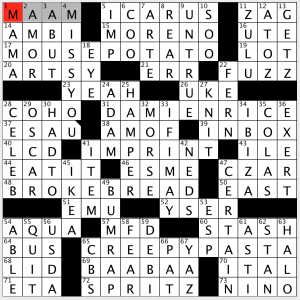 A celebration of everything I should probably only be eating in moderation!

I am now in a sedentary job, and it is starting to take it’s toll. I eat hardly anything and I still gain weight, so perhaps I need to watch my carbs, including potatoes, rice, bread and pasta! Ironically, the subject of this puzzle is making me hungry! 4.3 stars. 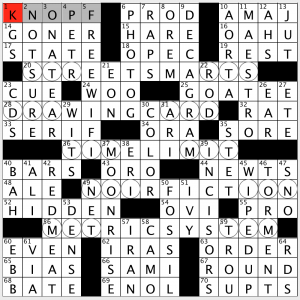 It feels like this puzzle needs a revealer, but how would you describe this? Some sort of “bookends?” The letters in the circles in the grid mirror each other in all of the themers.

These LAT puzzles that I blog on Tuesday’s almost always have a revealer, so maybe I almost expect it. And it would have been nice if the three-letter bits spelled something out when strung together. But I’ll bet it was still a little difficult to find several phrases that had this property. And the circles make that plainly clear that those squares are special. Unless I am missing something! A solid 4.2 stars today.

See you all this weekend for more crossword talk!